Scarily, there is a big market for revolutionary Russell Brand’s anti-capitalist idiocy 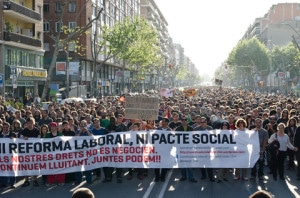 Russell Brand has made a very fine living out of the global entertainment industry, selling his wares via Hollywood films, concerts, DVDs and books. Good luck to him. While his particular brand of comedy has never been my thing, he does deserves credit for spotting a gap in the market and making a little go a long way. A few years ago comedians looking like a low-rent version of the great Keith Richards were in short supply. Brand emerged to meet public demand.

But he was not content with his achievements. He has now has decided to establish himself as a left-wing rabble rouser intent on blowing up the capitalist system. A new book – the Revolution – has been in the works since a notorious interview on the BBC’s Newsnight programme last year, during which he instructed the young not to bother voting.Some left-leaning academics asked each other excitedly whether this was “it”, meaning the moment that they have been waiting for since the financial crisis. Would disaffected youth now rise up and overthrow the market system and existing institutions? Brand’s book is designed as the rallying cry.

It is easy for pundits to laugh at all this and to pick holes in Brand’s juvenile arguments. At a packed event in London this week he delivered a ludicrous stream of consciousness about the need to nationalise business and tax everything he doesn’t like out of existence.

Here he is on Tesco, the British retailer:

“Why is there no-one to say you can have £300m profit per quarter, but we’re going to take some of that… with a 20% profit tax on Tesco per quarter, you could build a hospital in Leeds.”

That tax on profits he suggests sounds a lot like UK corporation tax, which already exists and is levied at 21% by the government on large companies. His policy proposal also overlooked that with troubled Tesco’s profits plummeting (and the share price in free fall as investors apply the logic of the market) you wouldn’t get many hospitals built if you relied on that particular supermarket.

But what is most worrying about the Brand phenomenon is that his demands for radical change have considerable potential appeal with young voters who hardly ever hear the alternative case. His fame means he is given a hearing and he is only rarely challenged with the historical evidence, of how profit and competition spur innovation and increased prosperity. During Brand’s Guardian event this week, social media crackled with commentary, much of it supportive. Yes, some pro-market people chipped in to point out the numerous inconsistencies, but many others commenting seemed gripped by the idiotic and incoherent musings of an anti-capitalist star. He has 8.24m followers on Twitter. That’s ten times the number that follow British Prime Minister David Cameron.

Of course, what Brand is selling is not new, it is just that he is cleverly using social media and post-modern media posturing to make bad old ideas look new. At root, like many restless, reckless, irresponsible left-wing revolutionaries down the ages he simply wants “the system” smashed to bits, so that out of the wreckage something else (what?) might emerge. But history suggests that in that smashing up – when property rights are trashed, private interests nationalised, freedom forfeited and democratic institutions subverted – a lot of people get hurt.

The views expressed on AustrianCenter.com are not necessarily those of the Austrian Economics Center.
hayek_admin2019-01-14T06:09:55+01:00