How governments promote the worst in us to redistribute wealth 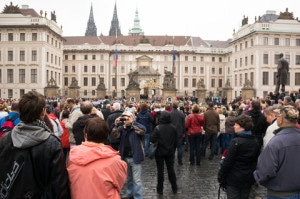 Many people standing in front of the entrance to the old government house in Prague, Czech Republic.
Image by © Dreamstime

The current fuss over inequality has a classic feel to it. For one thing, it’s one of the oldest plays in the Progressive playbook. But it’s a well-established maneuver for governments everywhere. The idea is to appeal to the age-old feelings of envy and guilt that arise in virtually every person: Why should some have more than others? Is it fair that some people or whole countries have greater wealth and higher incomes while others struggle?

History is rife with examples of politician-induced envy in order to attempt to justify redistribution. Those who fomented the Russian revolution in the early twentieth century tempted the proletariat with the property of the affluent. Hitler enticed the populace toward envy of the Jews, many of whom were economically successful in Europe, to help construct his national socialist empire. Miquel Faria, in his book, Cuba in Revolution: Escape from a Lost Paradise, states, “As in all socialist systems, Castro uses envy, class hatred, and class warfare.” Much the same has been true of Peronist Argentina.

It pits us against each other, letting politicians leverage an instinctive reaction to gain power. It’s an effective tactic and the rhetoric of inequality remains an effective cover, which is why politicians still trot it out routinely. But the policies it perpetuates will end up impoverishing any country.

Wealth redistribution inevitably robs every person of their freedoms. Equality is never achieved; the wealth is mostly shifted to those currently in power, who administer and derive political support from redistributive programs. The masses remain impoverished, and those in power remain, for as long as they can, the supposed champions of those masses, struggling for a fair redistribution.

This process was diagnosed some time ago by Helmut Schoeck, in his 1966 book Envy: A Theory of Social Behavior. According to Schoeck, “The revolutionary movements in South American republics, Bolshevism in Russia, the resentful Populists in the United States (today the Progressives), all were supported by those circles who would clearly be the first to take a malicious delight in the levelling of society. But without exception, and sometimes in the course of a few decades, the new ruling caste has become a bourgeoisie or a plutocracy.” Inevitably, those promulgating envy as a means to levelling, in the end become the same class they earlier despised.

History has shown us that the result of trying to enact income equality is that you achieve a society where all the citizens are poor together. Ludwig von Mises, in Socialism, wrote,

Most people who demand the greatest possible equality of incomes do not realize that what they desire would only be achieved by sacrificing other aims. They imagine that the sum of incomes will remain unchanged and that all they need to do is to distribute it more equally than it is distributed in the social order based on private property…. It must be clearly understood, however, that this idea rests on a grave error. It has been shown that, in whatever way one envisages the equalization of incomes this must always and necessarily lead to a very considerable reduction of the total national income and, thus, also, of the average income. For we have then to decide whether we are in favor of an equal distribution of income at a lower average income, or inequality of incomes at a higher average income. [emphasis added]

European countries moved toward socialism and levelling in a big way during the twentieth century, partially in order to decrease income equality in monarchies in which only a few had wealth and the rest lived in poverty. But what has been the result?

According to Richard Florida, co-founder and editor at large at The Atlantic Cities, “The U.S. accounts for about a third of all high-net-worth people (60,657), and Europe is home to 54,170.” The actual numbers are not starkly different. In 2012, 24 percent, or 120 million people, of the 500 million people in the European Union were listed as at risk of poverty. In the same year, the U.S. poverty rate (out of 318 million people) was 15 percent, roughly 46.5 million people. Socialist policies that attempt to level the economic playing field are repeatedly unsuccessful. As Winston Churchill stated, “Socialism is a philosophy of failure, the creed of ignorance, and the gospel of envy,” and “The inherent virtue of Socialism is the equal sharing of miseries.”

A society that encourages envy in order to “level the playing field” for its citizens is a society that will implode from within. Oppressive government spending programs requiring high taxation and controls on individuals can lead to economic stagnation or even collapse. There is something particularly sordid about politicians who play on our envy. It is a game of power and contro,l and it can lead people to justify using violence to take the property of others. Citizens of every country should learn to recognize whether politicians are manipulating them by playing on their envy. Only when we learn to aspire and admire those that are economically successful, and not be envious of them, will we see our economies flourish.

The views expressed on AustrianCenter.com are not necessarily those of the Austrian Economics Center.
hayek_admin2014-04-04T11:34:31+02:00