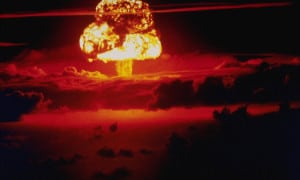 After 226 years that included some threats but no violations, Nevada Senator Harry Reid detonated the “nuclear option” – doing away with the filibuster rule designed to protect minority interests and to guard against what the Founders feared could become a tyranny of the majority. It was explained by Mr. Reid that eliminating the filibuster would pertain to executive appointees and federal judicial appointees, but not Supreme Court appointees. The only examples of bipartisanship were three Democrats who joined the forty-five Republicans in voting no.

Ironically, but not surprisingly, when Republicans threatened to explode the same “nuclear option” eight years ago, the loudest voices crying foul came from those who now say, yes. Senators Harry Reid, Joe Biden and Barack Obama, the junior Senator from Illinois were adamant in their opposition. They saw such a move as an “un-Constitutional attempt” to wrest power away from the minority. Mr. Obama was especially outraged: “The American people don’t expect…for one Party – be it Democrat or Republican – to change the rules in the middle of the game.” The “Gang of 14” interceded and the option wasn’t detonated. This time, President Obama summed up his feelings, in his schoolmarm’s and disingenuous way: “Enough is enough.” He added: “The American people’s business is far too important to keep falling prey day after day to Washington politics.” He avoided the inconvenient fact that Reid’s decision was based solely on politics (as were his comments) – diminishing the role of the Senate, expanding the role of the President and, at least temporarily, the power of the Democrat Party.

Living in America, we have been protected, thanks to our Constitution, against significant internal seizures of power and diminishments of liberty. These are rights we take for granted. In our trusting acceptance of a government that is “…a force for good,” as Senator Chuck Schumer recently referred to it, we ignore skepticism about the behavior of politicians in positions of power. We have, however, become stupider of history and our knowledge of the Constitution, suggesting we are vulnerable to charismatic leaders seeking power.

The desire for power is universal and omnipresent. Efficiency does not define our government. When government assumes responsibilities in the name of fairness or when security has expanded in the interest of safety, individual dependency has increased and rights have suffered. Since the days of the New Deal, dependency on government has gradually grown. During the Civil War, Lincoln suspended the right of Habeas Corpus. During World War I, individuals were jailed for speaking out against President Wilson. Franklin Roosevelt made an aborted attempt to “pack” the Supreme Court in 1937, but he did send Americans of Japanese descent to internment camps following the attack on Pearl Harbor. The Patriot Act swapped rights of the individual in exchange for national security. The Boston police virtually shut down the city and surrounding towns, in a hunt for the Tsarnaev brothers last April. One might argue that in those cases, such restrictions were warranted by events at the time. Nevertheless, it behooves us to be vigilant and questioning, not blindly accepting of such limitations to our personal liberty. “If men were angels, neither external nor internal controls on government would be necessary,” wrote James Madison on February 6, 1788 in Federalist no. 51.” In framing a government, in which men rule over men, “you must first enable the government to control the government, and in the next place to control itself.”

Harry Reid’s decision showed no wisdom, no forethought and was disdainfully disrespectful to the institution he leads. It was purely political. He surrendered the deliberative nature of the Senate for the cause of ideology and expediency. In doing so, he emasculated the Senate and handed more power to the President.

The reason he did so, he claimed, was because he had become frustrated with Republican “obstructionism,” especially regarding the appointment of three judges to the U.S. Court of Appeals. Democrats claim that a three-seat vacancy needs to be filled. Republicans counter that six retired judges have been filling in, and that in any event the Court is under-worked. I don’t pretend to know which is accurate, but it begs the question as to whether expediency should trump deliberativeness when it comes to the operations of the Senate. The cynic in me says the President and Senate and House Democrats have a strong incentive to divert attention from what continues to be a disastrous roll-out of ObamaCare.

One definition of leadership is the ability to get people of myriad persuasions to work together. In the Senate that means finding common ground, even among varying and warring factions. In that regard, Harry Reid has been a failure. He is far too partisan. As U.S. Senators, loyalty should be to the states they represent and to the American people, not to a Party and not to a President. That is why they serve six-year terms. As Americans, we all have common interests. It is a question of seeking it out. Insults and harangues may appeal to the media, but do little to help people of differing convictions find conciliation.

When frustrated by Republicans or simply by the deliberate way in which bills and appointments make their way through the Senatorial process, Mr. Obama has taken to issuing executive orders and creating czars to further his agenda. The powers of the EPA and unions have been enhanced through orders that bypass the Congress. Mr. Reid, in his recent decision, has abetted that process, in limiting the ability of the minority to filibuster appointments, whether to the courts, to Fannie Mae, the NLRB, the Department of the Interior, or the EPA. Too little regulation may be bad for the environment; too much is harmful to the economy. Defending unions against right-to-work states impedes employment growth. Immigration reform, when it is aimed at increasing Democrat voter registration is not reform. Fannie Mae symbolized the cronyism that helped bring about the financial meltdown in 2008. Appointing Mel Watt, a leftist Democrat Congressman, to lead the Agency risks a repeat of everything that went wrong in 2008.

People should not lose sight that this Congress and this President have been historically divisive and partisan. Throughout our history, landmark legislation has been passed with votes from both Parties. Social Security, Civil Rights, Medicare and Medicaid received bipartisan support, as did Medicare Part D. Debates were often heated, feelings ran high and votes were frequently close, but in all cases support came from Democrats and Republicans. Even Dodd-Frank had votes from three Republican Senators. But ObamaCare did not garner one opposition vote. It was passed unilaterally, in the same way the Stimulus Bill was. And Democrats and much of mainstream media wonder why its implementation has been so catastrophic? Blame does not lie on the shoulders of the opposition Party. When the fault is so fundamental and reconciliation is impossible, one should look to the leaders.

The wisdom of the Founders may seem archaic today. Modern times, so goes the argument, require modern responses. While that may sound appealing, one should be cautious; for the human traits with which the Founders were dealing are ageless. The desire for power, as I wrote earlier, is universal. It is also timeless and dangerous. Self-confidence is required for success, but hubris precedes failure. Surrendering rights for security may seem sensible when threats are imminent, but one must consider the consequences. Dependency precludes self-reliance. Having successfully fought a revolution, the Founders were not about to give in to despotism no matter its origin. It did not matter whether tyranny emanated from the masses via unfettered democracy, or through an all-powerful executive. More than anything, the Constitution is about restricting power. The Founders insured that the three branches of government would be checked and balanced. Reducing the role of the one increases the power of the other.

In disallowing the minority party the right to filibuster on Presidential appointments, Mr. Reid has opened Pandora’s Box. He has opened the possibility that all filibustering may become disallowed. The two-thirds vote requirement for numerous Senatorial responsibilities was a means of protecting the minority against the tyranny of the majority. Doing away with such a requirement argues that the Senate may well decide future matters with a simple majority, making it similar to the House. That was not the intent of the Founders, who certainly possessed more wisdom than Mr. Reid or Mr. Obama. In Federalist No. 10, James Madison warned against “the cabals of the few,” just as he did against “the confusion of the multitude.” Can you imagine any politician uttering such a warning today?

One cannot help but wonder if Mr. Reid fully thought out the co