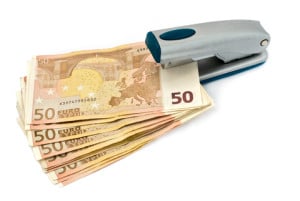 The debate over raising the legal minimum wage (LMW) to $10 an hour has people on both sides saying things they should know better than to say. For example, a friend recently posted the following meme (which isn’t the worst I’ve seen) on Facebook:

Yes, several, but I’ll get to those in a bit.

Memes like these are just as silly and misleading as the simplistic arguments they’re probably attacking. In fact, the economic analysis of significantly raising the minimum wage says that, other things equal, it will reduce employment below the level where it would otherwise have been. It doesn’t say that that employment will fall absolutely or businesses will collapse.

A Little Thinking Can Go a Long Way

Have a look at this chart published in the Wall Street Journal. At first, it seems to support the simplistic slogans. But it’s important to compare similar periods, such as March–November 2012 (before the increase was passed) versus March–November 2013, (just after it went into effect). The LMW increase wasn’t a surprise, so in the months before it was passed, businesses would have been preparing for it, shaking things up. Comparing those two periods, which makes the strongest case for the meme’s assertions, the total percentage increase in employment (the area under the red line) looks pretty close, going just by my eyeballs and a calculator. In fact, the post-hike increase might actually be smaller, but you’d need more data to be sure. So if you compare similar periods, the rate of employment growth seems not to have been affected very much by the hike. So is the meme right?

According to that same chart and other sources, hiring in the rest of California and the country, where for the most part there was no dramatic increase in the LMW, was also on the rise at pretty much the same time. Why? Apparently, the growth rate of the U.S. economy jumped in 2012, especially in California. So the demand for inputs, including labor, probably also increased. I’m certainly not saying this correlation is conclusive, but you could infer that while hiring in San Jose was rising, it wasn’t rising as fast as it might have otherwise, given the generally improving economy.

That’s a more ambiguous result, and of course harder to flit into a meme.

You Are Stupid and Evil and a Liar!

Those strongly in favor of raising the LMW cast opponents as Republican apologists for big business. Take this post from DailyKos, which apparently is the source of the above meme. The author writes, “Empirically, there’s no clear negative effect that can be discerned. The concerns of Teahadists like Paul Ryan and Marco Rubio is [sic] rather unfounded in academic literature and in international assessments of natural experiments.”

Now, the overwhelming conclusion of years of economic research on the effects of a minimum wage on employment is that it tends to increase, not lower, unemployment. As this article from Forbes summarizes, “In a comprehensive, 182-page summary of the research on this subject from the last two decades, economists David Neumark (UC-Irvine) and William Wascher (Federal Reserve Board) determined that 85 percent of the best research points to a loss of jobs following a minimum wage increase.”

So, saying there is “no clear negative effect” is an outrageously ignorant claim. And there’s not one mention of the economic evidence that significantly raising the LMW will hurt the very people you wish to help: the relatively poor. But why address solid scientific research when there’s sloppy sloganeering by politicos to shoot down?

Attacking easy targets is understandable if you want to vilify your opponents or win an easy one for the cause. In that case, you take the dumbest statement by your rival as the basis of your attack. Such is the way of politics. In intellectual discourse, however, you may win the battle but you’ll lose the war. That is, if your goal is to learn from fruitful intellectual discussion, you must engage your opponent’s best arguments, not her weakest ones.

Let me use a counterexample. The sloganeering approach to attacking those who oppose raising the LMW is the equivalent of someone saying: “Well, this past winter was one of the coldest on record in the Midwest. So much then for global warming!” That may be “evidence” in a mud-slinging contest, but it’s not science.

While weather is complex and unpredictable, economic systems are even more so. Does that mean there are no principles of economics? Of course not. In fact, it’s because of such complexity that we need whatever help economic theory can offer to organize our thinking. And it doesn’t get any more basic than this: The demand curve for goods slopes downward.

That is, other things equal, the costlier something is, the less of it you’ll want to buy.

Note that the caveat—other things equal—is as important as the inverse relation between price and quantity demanded. That’s why my earlier back-of-the-envelope analysis had to be conditional on more data. Unfortunately, those data are often very hard to get. Does that mean we abandon the theory? Well, that would be like letting go of the rope you’re hanging on to for dear life because you’re afraid it might break.

So what exactly is the theory behind the idea that raising the LMW will increase hiring low-wage workers and boost business? If raising wages will actually increase employment and output, then why not also mandate a rise in interest rates, rents, electricity rates, oil prices, or the price of any of the other myriad factors of production that businesses ordinarily have to pay for? I would hope that this idea would give even the meme promoters pause.

As far as I know, the only situation in which forcing people to pay a higher wage rate will increase employment is when there is a dominant employer and there are barriers to competition. Economists term this “monopsony,” a situation that might occur in a so-called “factory town.” There, the dominant employer (of labor, capital, land, or whatever) can lower what she pays for inputs below the revenue that an additional unit of input earns the company. I would love to hear that argument and challenge it, because it’s the strongest one that standard economics can offer in favor of coercing businesses to raise wages. But so far I’ve not come across it, let alone any discussion of the economic literature on monopsony in the labor market, most of which questions its relevance. Some almost random examples are here and here.

Finally, economics teaches us that we can adjust to a particular change in different ways. In a thoughtful article on the effect of the LMW increase in San Jose that all sides of the debate should read, we get the following anecdote:

For his San Jose stores to make the same profit as before the wage increase, the same combo meal would be $6.75. “That would chase off a large percentage of my customers,” Mr. DeMayo said. He hasn’t laid off San Jose workers but has reduced their hours, along with some maintenance such as the drive-through lane’s daily hosing, and may close two unprofitable stores.

Employers can adjust to higher costs in one area by cutting back on spending in others. That might mean less unemployment than otherwise, but it doesn’t mean that raising the LMW has no negative employment effect at all. It means that the effects are harder to see. There’s that darn “other things being equal” again!

Slogans and memes are no substitute for science, or even clear thinking.

The views expressed on AustrianCenter.com are not necessarily those of the Austrian Economics Center.
hayek_admin2014-05-20T09:32:57+02:00<div class="fusion-shar