Why Small States Are Better: An Interview with Philipp Bagus and Andreas Marquart

Andreas Marquart, Chairman of the Ludwig von Mises Institute Germany, and Philipp Bagus, Professor of Economics in Madrid and IREF Scholar, have published their second book “Wir schaffen das – alleine!” in March. They have answered our questions.

The Book is only available in German: 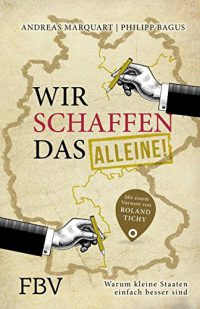 Mr. Marquart, Mr. Bagus, you have released your new book „Wir schaffen das – alleine!” (“We can do it – alone!”) this spring. The subtitle says: “Why small states are just better.” To begin: Why are small states generally better than larger ones?

Andreas Marquart (AM): In small states the government is closer to its citizens and by that better observable and controllable by the populace. Small states are more flexible and are better at reacting and adapting to challenges. Furthermore, there is a tendency that small states are more peaceful, because they can’t produce all goods and services by themselves and are thereby dependent on undisturbed trade.

How far can the principle of small states go? You are for example open to the idea of Bavaria seceding from Germany, or Upper Bavaria then from the rest of Bavaria. Ludwig von Mises stopped at the communal level, thinking that the secession of individuals would be unrealistic. You as well? Is there a point when your rule – the more decentralized the better – is not true anymore?

Philipp Bagus (PB): In principle not. We don’t want to arrogate, however, to know the optimal size and to say that this state is too small and that one too big. The optimal size would be determined in competition through the right of secession. If an apartment tower or street secedes from its municipality and then concludes that there are problems which were previously done better, then the secession could be revoked and the two entities reunited. Are they better off alone, however, they will stay seceded. In this competition it will then show how successful small states can be.

At the moment we see more and more attempts around the world to secede – Brexit for example or recent attempts by Scotland and Catalonia. What all these cases have in common is that the secession is executed by governments which are economically more on the Left, and by that probably no advantage can be seen for the seceding entity, since the newly gained freedom is used immediately for more state intervention. Are cases such as these, where the secession would bring forth downsides for that country, also to support?

AM: Generally secession attempts are always to support. The citizens must have a right to self-determination. Even the UN charta says that a people or a nation has the right to establish an own state or to join another nation. If a region wants to secede to try again if socialism works, then so be it. We learn from mistakes. And the smaller the states, the quicker and clearer the mistakes will become visible and the quicker changes have to implemented. After Brexit for example Britain will be under immense pressure to set itself apart from the EU. By the way, I don’t know any government and close to no party in Europe or any other country which isn’t in some way on the Left. In which way for example is the conservative CDU in Germany any different than the social democratic SPD or the Greens? Or the “classical liberal” FDP? Real classical liberal or liberty-oriented politics cannot be found anymore. All the differences are mere nuances and everyone is similar to each other in a more or less social democratic mishmash.

Would it be possible in your model that small states still cooperate with each other in supranational organizations? Or are the EU, NATO, UN etc. all obsolete in the end?

PB: Of course small states could or even have to cooperate with one another, especially on defense – at least as long as larger states still exist, which have a tendency to be more aggressive. Forms of cooperation like free-trade zones or also organizations which contribute to the harmonization of standards would exist. The EU in its current form is pointless, it has outgrown its original purpose of a pure cooperation.

On foreign policy you argue that small states conduct less wars. For many this will sound unintelligible at first, considering the common picture of the Middle Ages, where there were many more small states than today, is one of constant conflicts between kings and nobility. Why doesn’t this have to be the case?

AM: I don’t think we can compare those days with today. We are on a totally different level in terms of civilization. What has not changed of course: wars are about resources. In the past, most fighting occurred over land since farming was so significant and was in no way as productive as it is today. And when there were no possibilities to trade in the Middle Ages, it wasn’t too tragic, because the division of labor had nowhere near the significance it has today. Because of the very advanced international division of labor no small state of today can afford to deny itself from foreign trade or that the flow of goods is stopped – at least as long as it doesn’t want its population to starve as it happens in North Korea. So one has to behave peaceful. Just look at Liechtenstein: They haven’t even had an army anymore since 1868. Free trade is the ultimate guarantor of peace.

You often use the example of Switzerland in your book. In which ways does this country show how small states work?

PB: It relies on free trade, open borders, has relatively low taxes, a high standard of living and didn’t have to moan over war deaths in the twentieth century. It is often asserted that small states can’t protect its population, that it would lead to different standards or new trade barriers which would prevent trade from happening, or that it would be overrun by economic refugees. Switzerland is the counterexample.

As good as Switzerland – or also small states such as San Marino or Liechtenstein – may work, there are still counterexamples like Belgium, a country which has always remained neutral, but was still overrun by Germany in both World Wars – among other things due to its overall weakness. How does the sorrow of Belgium fit into the overall picture?

AM: For one we are not saying that a world of small states would be heaven on earth. Libertarians should in general watch out for not creating the impression that in the world they describe all problems we are fighting over today would vanish. We can assume nonetheless that in a world of small states both World War I and II would not have happened in all likelihood. And if the gold standard hadn’t been suspended at the beginning of World War I, the war – if he had broken out at all – would have been over within a few days, since the warring parties would have run out of money. Of course there could arise the situation that a small state is threatened by a “big neighbor.” In this case the small state can enter a defense alliance. Examples from the past – the Hanseatic League or the German Confederation – are manifold. In the same way that goods and services are organized on the market to cover the demand of the consumers, alliances between small states would organize if they demand protection and security. Humans are very ingenious if they are allowed to act freely. We shouldn’t underestimate this ability.

Followers of the realist school of thought would probably argue that the idea of small states is surely nice, but that in the world we live in not everyone thinks that way. To give examples: Wouldn’t it be possible that assuming the US breaks apart, Russia would quickly invade Eastern Europe? Especially at the end of World War II, the