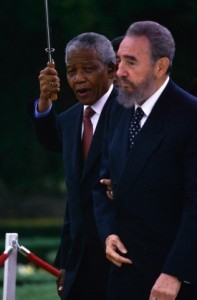 The public eulogies marking the passing of Nelson Mandela at the age of 95 on December 5, 2013 have refocused attention on the long struggle in South Africa to bring about an end to racial discrimination and the Apartheid system.

Mandela and His Marxist View of Apartheid

Forgotten or at least certainly downplayed in the international remembrance of Mandela’s nearly three decades of imprisonment and his historical role in becoming the first black president of post-Apartheid South Africa is the fact that through most of the years of his active resistance leading up to his arrest and incarceration he accepted the Marxist interpretation that racism and racial discrimination were part and parcel of the capitalist system.

Mandela was a member of a revolutionary communist cohort who were insistent and convinced that only a socialist reorganization of society could successfully do away with the cruel, humiliating, and exploitive system of racial separateness.

With the fall of communism in Eastern Europe and the Soviet Union in the late 1980s and early 1990s, the communist model of socialist transformation was too tarnished and delegitimized to serve a as a guidebook for post-Apartheid South Africa by the time that Mandela assumed office as the first black president in that country in May 1994.

Instead, Mandela’s government followed the alternative collectivist path of a highly “activist” and aggressive interventionist-welfare state, with its usual special interest politicking, group-favoritism, and its inescapable corruption and abuse of power. Its legacy is the sorry and poverty-stricken state of many of those in the black South African community in whose name the anti-Apartheid revolution was fought.

The Free Market Criticisms of Apartheid

But this did not have to be the road taken by South Africa. There were other voices that also opposed the racial and Apartheid policies of the white South African government, especially in the decades after the Second World War.

These voices argued that racial policies in that country were not the result of “capitalism,” but instead were precisely the product of anti-capitalist government interventionism to benefit and protect certain whites from the potential competition of black Africans.

One of the most prominent of these voices was economist, William H. Hutt. Hutt had come to South Africa from Great Britain in 1928 and taught at the University of Cape Town until the 1970s, when he moved to the United States where he died in 1988. Born in 1899, he had attended the London School of Economics and studied under Edwin Cannan, the noted historian of economic thought and liberal free trade economist.

In the 1950s and 1960s, Hutt became most widely known in free market and classical liberal circles as an outspoken and tireless critic of Keynesian economics and an advocate of a liberal free market order.

But his notoriety in South Africa was due to his well-reasoned and biting criticisms of government economic policies to “keep blacks in their place.” Indeed, in the mid-1950s, Hutt was threatened with expulsion from the country as a result of his criticisms until the matter was brought up in the South African parliament, and his right of residence and freedom of speech were defended.

William Hutt’s criticisms culminated in a 1964 book, “The Economics of the Color Bar.” The thesis of the book was that South Africa’s “race problem” was due to the rejection of a liberal, open and competitive market economy. Black poverty and the income inequality between South African whites and blacks was caused by government regulation and prohibitions that bestowed privileges on segments of the white, and especially Afrikaner, population at the expense of unprivileged blacks who were prevented from competing for employment and opening businesses in restricted “white-only” parts of the economy.

These discriminatory laws began to be implemented in the early decades of the 20th century. Under “workplace fairness,” for example, white trade unions had pushed for legislation requiring for “equal pay for equal work.” But, in fact, such laws made it difficult for blacks to offer themselves at more attractive wages than their white competitors. This worked like a minimum wage law that prices lower skilled and less valuable workers out of the market. In the South African case, the burden of exclusion from employment fell almost completely on blacks.

In his book Hutt traced out the history of how the Afrikaners, who had originally come from Holland and had first settled in South Africa early in the 1600s, were mostly farmers who shunned manufacturing and commercial enterprise. These latter occupations and businesses were mostly formed and developed by later settlers from Great Britain.

But as circumstances changed over time in the 19th and early 20th centuries, with industrial development and the growth in mining, Afrikaners reluctantly found themselves moving into these lines of employment. However, they resented and feared the potential competition from black Africans also looking for employment, and who might be more industrious than themselves or willing to work for lower wages.

The labor market restrictions were exacerbated in the post-World War II period when the Afrikaner-led Nationalist Party came to power in 1948 and instituted the Apartheid policy of keeping the races separate by restricting entire professions and occupations or forms of employment for white workers only.

In addition to occupational segregation, Apartheid attempted to limit black residence and settlement to certain parts of South Africa, which included restrictions on the everyday movement of blacks within white areas.

Government Planning to Separate the Races

Hutt called this a form of “totalitarian” control so the government could “centrally plan” the interactions, associations and movements of whites and blacks throughout the country. Contrary to the leftist propaganda of the time, many private businesses in South Africa were interested and willing to employ black workers and invest in their training and acquisition of more highly valued marketable skills.

However, the Afrikaner government used its regulatory and fiscal tools of control and intimidation to “keep in line” white employers who saw economic gain by “crossing the color line” in their businesses and enterprises.

Thus, it was political goals of the South African government and not the market motive of profit that prevented black South Africans from having the opportunities to rise more out of poverty through peaceful competition and cooperative commercial association.

Free Markets as the Great Liberator