Spreads and the Business Cycle: Opportunities and Risks

The Fed decided earlier today to postpone the increase in short term rates citing global growth and disinflationary concerns. We believe that such concerns are overstated, at least for developed economies. We are of the opinion that if the Fed had finally started the normalization stage for short-term interest rates, it would have unleashed the cash that is sitting in the balance sheets of financial and non-financial institutions and therefore boost growth and earnings prospects. On the contrary its decision infused risks in the economy since it added confusion that it may know something that has not been discounted yet and thus its decision carries some opportunity cost.

Let’s review the rising high yield (HY) spreads and distinguish them between energy and non-energy sectors. 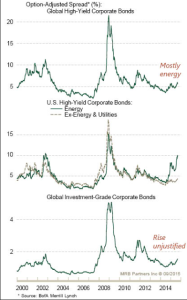 As the middle graph above shows, the rise in HY spreads concentrates in the energy sector due to price declines. In a growing economy, default risks are declining and thus the spreads should be narrowing. The higher spreads among investment-grade corporate bonds may signify an opportunity for purchasing those bonds for the short term.

Given the revenue and earnings performance of energy-related HY bonds, we anticipate that the default rate among them will increase by the first and second quarter next year, which may contribute to a higher probability of recession by the end of 2016, especially if liquidity problems in the bond market intensify by mid next year. Therefore, any asset allocation and investment strategy would need to be revisited by the end of the first quarter next year.

A December increase in the short term rates by the Fed may intensify emerging markets’ turmoil in the first quarter of next year, which will then put a downward pressure on the trade cycle and increase the chances for a recession later that year as their ability to repay US-denominated debt will decrease. It is clear in our opinion that the Fed lost an opportunity to smooth out any potential turmoil that may erupt next year.

The markets require a new transmission mechanism besides asset prices and exchange rates, especially with the turmoil in emerging markets currencies. Hence the markets are seeking for the revitalization of the credit demand and supply framework which in turn requires an interest rate hike. The credit channel will be enhanced with higher short-term rates which, contrary to conventional wisdom, will strengthen earnings projections since the latter seek liberation from financial repression. As previous commentaries since August 31st have explained, we believe long-term rates will stay unaffected when short term rates rise, which will enhance the financial stability framework sending the signal that monetary policy has escaped from its impotence stage. Credit demand is slowly rising (see graph below) and requires a stable framework where rules of normalization start functioning again. 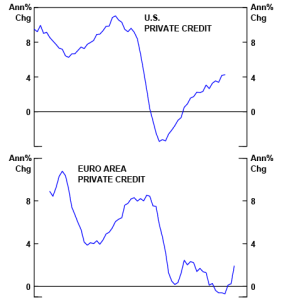 Overall then, we remain cautiously optimistic – as explained in recent commentaries – that the revitalization of earnings along with the credit channel will be able to advance equities and provide opportunities for some corporate debt in the short term.