The election of Donald Trump as the next president of the United States produced a strong reaction in global financial markets. Stocks rallied, but even more interesting was the significant strengthening of the U.S. dollar and a spike in bond yields – both driven by higher inflation expectations.

What the financial markets are telling us is not just what economic policies a Trump administration and a Republican-controlled Congress will pursue, but also how the Federal Reserve will react to these policies.

But what exactly are the markets saying? First, they are relaxed about the election’s outcome. This is a fair indication that investors believe that President Trump will never succeed (or even seriously try) to carry out many of the “promises” on trade and immigration he made during the election campaign.

Second, there is no sign of anxiety about a U.S. recession or a global economic crisis. Stocks have rallied more or less continuously since election day. We are getting the same message from the currency markets, where the dollar has continued to strengthen and is now at its strongest level in 13 years. 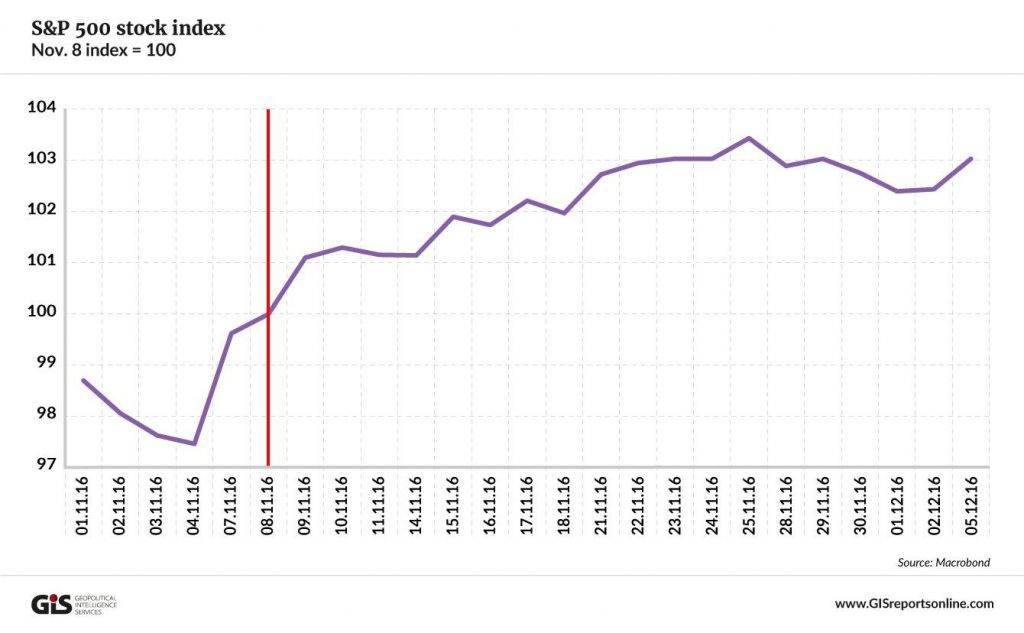 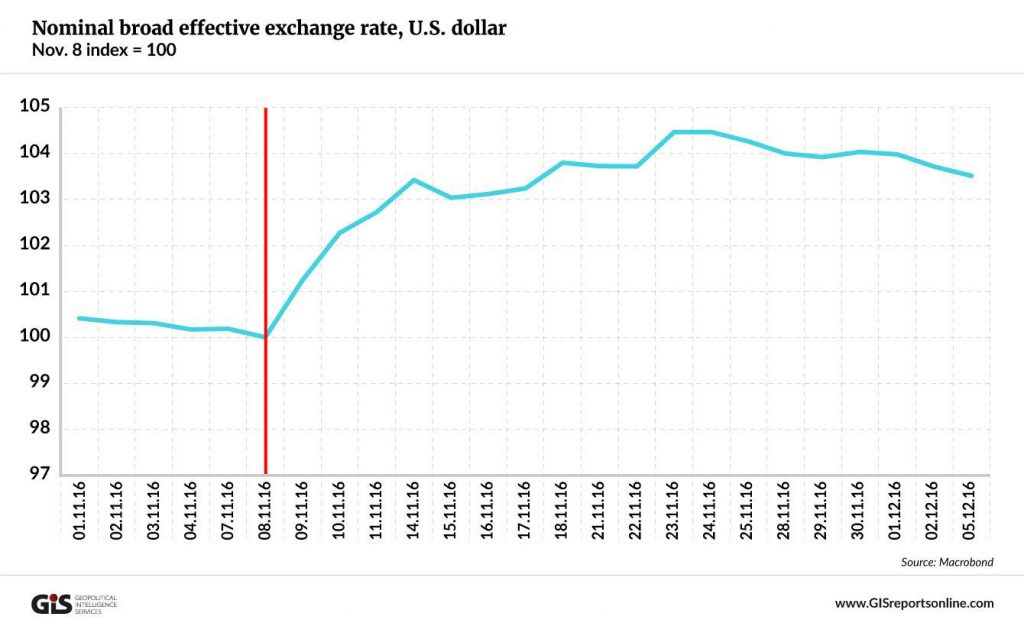 Dollar appreciation began after the U.S. election result was known (macpixxel for GIS)

The bond market, however, is most revealing about policy expectations for the new administration. Yields of 10-year Treasury bonds have jumped nearly half a percentage point since November 8. This tells us that investors see a fairly large-scale fiscal stimulus coming. Put in another way, the Trump administration will likely adopt a basically Keynesian stance, using fiscal policy to boost aggregate demand in the U.S. economy.

We know that Mr. Trump has already pledged to increase Federal spending on infrastructure, and he has also vowed major tax cuts. With Republicans firmly in control of both the House and the Senate, he should be able to deliver on some of these promises.

It might seem paradoxical that a Republican president would be a big spender, but recent history shows that Republicans have, on balance, been somewhat less fiscally conservative as presidents than their Democratic counterparts. Since World War II, U.S. public spending has grown by about a quarter of a percent per year faster under Republican presidents. The bond market dynamics suggest investors believe it will be no different with Donald Trump in the White House.

What will he spend the money on? Mr. Trump’s own victory speech leaves little doubt that it will be on infrastructure. “We are going to fix our inner cities, and rebuild our highways, bridges, tunnels, airports, schools, hospitals,” he told his supporters on election night. “We’re going to rebuild our infrastructure, which will become, by the way, second to none. And we will put millions of our people to work as we rebuild it.”

While the bond market is pointing to an expansionary fiscal policy agenda from the Trump administration, it is also notable that short-term bond yields did not initially rise as much, resulting in an upward tilt to the yield curve.

This shows that markets did not expect the Federal Reserve to fully offset the impact of a fiscal stimulus – at least while inflation expectation remained below 2 percent. They still anticipated the Fed will increase interest rates, but it was by no means a given that these rate hikes will be aggressive – at least not in the near term.

To some extent, this reflected the Federal Reserve’s own calls for fiscal easing to help support aggregate demand. This shift seems to have started on August 26, with comments by Federal Reserve Chair Janet Yellen at the Kansas City Fed’s Economic Symposium in Jackson Hole, Wyoming. Her remarks are worth quoting at length:

Beyond monetary policy, fiscal policy has traditionally played an important role in dealing with severe economic downturns. A wide range of possible fiscal policy tools and approaches could enhance the cyclical stability of the economy. For example, steps could be taken to increase the effectiveness of the automatic stabilizers, and some economists have proposed that greater fiscal support could be usefully provided to state and local governments during recessions. As always, it would be important to ensure that any fiscal policy changes did not compromise long-run fiscal sustainability.

Finally, and most ambitiously, as a society we should explore ways to raise productivity growth. Stronger productivity growth would tend to raise the average level of interest rates and therefore would provide the Federal Reserve with greater scope to ease monetary policy in the event of a recession. But more importantly, stronger productivity growth would enhance Americans’ living standards. Though outside the narrow field of monetary policy, many possibilities in this arena are worth considering, including improving our educational system and investing more in worker training; promoting capital investment and research spending, both private and public; and looking for ways to reduce regulatory burdens while protecting important economic, financial, and social goals.

Since August, we have heard this message again and again from Fed officials. In a speech to the New York Economic Club on October 17, Vice Chairman Stanley Fischer said that “[s]ome combination of more encouragement for private investment, improved public infrastructure, better education and more effective regulation is likely to promote faster growth of productivity and living standards.”

One consequence of massive government infrastructure spending would be to push up the so-called equilibrium interest rate. This would allow the Fed to raise interest rates without really tightening monetary conditions, so long as the increases were lower than the rise in the equilibrium rate.

This points to the potential for an alliance between the Trump administration and the Federal Reserve, which could produce simultaneous fiscal and monetary easing in 2017. It is this scenario that the markets have recognized and discounted.

The consequences are very clear in terms of inflation expectations (as measured in the bond market), which have jumped since the election. Investors’ conclusion that Donald Trump’s economic policies will prove inflationary gave rise to the now-popular term “Trumpflation.”