Strategic Misconceptions and Market Expectations: The Brighter Side of a Dark Moon 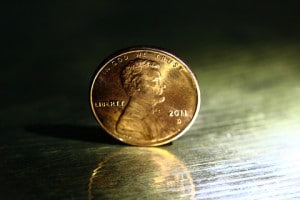 In the last few days we’ve observed geopolitical events taking place from the Middle East to Eastern Europe and from Africa to Asia, shaking the markets and molding expectations. The Islamic State in the Middle East endangers not only regional stability but also threatens to unleash risks for western countries. The turmoil in Libya and Nigeria has the potential of unleashing waves of uncertainty that would have repercussions for all of Africa. The yo-yo situation in Ukraine has become a source of a pan-European absurdity theater that risks war again after seventy years of peace and prosperity. And in Hong Kong (from where these lines are being drafted) the Beijing ruling regarding the guidelines and rules for the regional election of 2017 has been met with demonstrations and tear gas while Beijing has threatened with “bloodshed”. In the midst of this angelic chorus The European Central Bank fearful of deflation is getting ready to employ measures of cheapening the Euro and adopt quantitative easing measures, i.e. continuing to treat the brain tumor of the Eurozone with aspirin.

“What is the brighter side then?” one might ask. This brighter side has to do with the short-term market trajectory that is aspired by unconventional measures that, while not addressing the cause, provide relief from the pain created by unanchored fiscal and monetary policies.

But first the worrying news from the Euro land. The ESI index (Economic Sentiment Indicator) dropped more than expected in August. This along with the drop in the zone’s PMIs (Purchasing Managers Index) provides clear indication that the EU’s weak recovery is in trouble. Even worse is the news that manufacturing confidence portrays a picture of negative growth. Given that employment intentions are weak and spending is expected to be restrained, the overall growth outlook becomes even shakier. Add to that the debt problems and the deflationary pressures and you end up with a cocktail that is not that tasty.

When someone examines corporate lending in the Euro land gets even more concerned as the following graph shows. 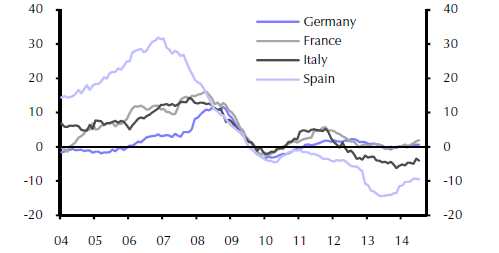 The graph indicates that year-on-year corporate lending has on average declined by 2.2%. Rather than focusing on the why this is taking place, the solution sought after is having the ECB purchase paper assets (i.e. third-party liabilities) and increasing the monetary reserves in the EU. Such treatments are not a panacea, simply because real phenomena of growth and employment are only addressed by real variables such as enhancing the returns to investments by creating an environment conducive to businesses. The declining expectations on profitability and returns on investments is the real illness of the EU rather than the lack of monetary aggregates. The latter cannot be converted into real money growth given the absence of the demand for real (nor paper) investments which are the only ones capable of enhancing productivity, employment, and incomes.

On the other side of the Atlantic, the US keeps reporting positive economic news that may even lead to a 4.2% annual GDP growth rate. Starting with the budget deficit and debt picture, the situation has improved significantly from two years ago. Specifically, the budget deficit two years ago was expected to be around 5.8% of GDP, while the latest data project it to be around 2.9%. Also, the net federal debt as a percentage of GDP was expected to hit 95% by this time in 2012, while the actual number is about 80%. Of course, the abnormally low interest rates have contributed significantly to the lower deficit and debt percentages; however the bottom line for the markets that seek opportunities to advance the cause of high returns is that good news on the deficit front is good news for equities.

At the same time, capacity utilization keeps improving and demands for business loans keep rising, both of which indicate strong productive investment activity, as shown below.

The brighter side then of the dark moon (dark given the unsustainable debt levels, the unfunded liabilities, the shaky credit pyramid with trillions of derivative schemes to name just a few) is the trajectory of the equities markets – especially in the US – which for the foreseeable future may enjoy healthy returns (despite some sideways movements and possible mini-corrections).

The views expressed on AustrianCenter.com are not necessarily those of the Austri