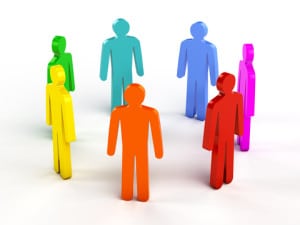 Democrats brag their Party is comprised of people from myriad and diverse backgrounds. They are, but then, for the sake of political convenience, individuals are compartmentalized into easily defined subgroups that are monotheistic in terms of thoughts. For example, if one is poor one must think like a poor person; if one is Hispanic, one must act Hispanic; if one is Black, do not think like a conservative; if one is a young, twenty-something female, one must behave like all other young, twenty-something females; if one is old, one must conform to the wants of the aged; if one is of the “99%”, one must stand against the venomous one percenters. Democrats assume that a young, Black, female conservative must be demented or brainwashed. Such attitudes may fire-up the electorate, but they are insulting to the individual and sanctimonious in the assumption that people cannot think for themselves.

The Republican Party, despite detractors’ claims, also includes people from across the spectrum. But, more important, it tends to be polytheistic in ideas and opinions. That gives it, at times, the cacophonous look of an asylum, but in reality it provides a forum for the sharing and free expression of ideas. But, for such apostasy the Party gets ridiculed by mainstream media. Tea partiers are racists, evangelicals are anti-gay, Midwestern blue-collar workers are narrow-minded and prejudiced, dopey, old white men are prejudiced, dopey, old white men.

Liberal Democrats – at least those in the highest elective offices – believe in a government of the elite by the elite, for the masses. It is only the elite that have the intelligence, empathy and sophistication to understand the needs of the less fortunate. “I feel your pain,” Bill Clinton might say to a medley of suffering poor, as he reaches for a plate of fried oysters and heads out to make another $200,000 speech. “We are five days away from fundamentally transforming the United States of America,” called out Barack Obama in rock-star fashion at the University of Missouri in late October 2008 to youth influenced by Mr. Obama’s charisma, but unconcerned as to his use of the word “transforming.” Recently, Black Democrat Representative James Clyburn chastised Black Republican Senator Tim Scott for not voting the color of his skin, inferring that Mr. Scott was an “Uncle Tom,” implying that he does not have a mind of his own and ignoring the fact that Mr. Scott represents all the people of South Carolina. Trust us, these political leaders are saying, just don’t ask us to explain.

Democrats claim to be liberal, but what is liberal about college students refusing to hear speakers that have views contrary to their own? Might not the students at Rutgers, Brandeis and Smith College have learned something from women like Condoleezza, Ayaan Hirsi Ali, and Christine Lagarde? What moral turpitude the president and trustees of these universities expressed in giving in to a few students’ intolerant demands!

Colleges have become liberal incubators of group-think: Women, stand here; Asian students over there; gays and lesbians in this corner, Blacks here and Hispanics in the center. White, heterosexual male? You must check the privilege that allowed you to be born the way you were and you must demonstrate remorse toward all those who were not. Shakespeare has given way to women’s studies. The study of classical Greece has been replaced with classes on transgenderism. Diversity is good, but not when people are placed in control-think pens. It is the diversity of ideas that we should celebrate, not the manufactured diversification that is a consequence of affirmative action. (I supported affirmative action in its early days, as I felt, as did many of today’s conservatives, that the unfair treatment of African-Americans for so many decades needed to be rectified. But that was more than fifty years ago and we have come a long way.) We need open debate and respect for the individual and we must encourage all people to think independently, consider the opinions of others and to accept responsibility for the decisions one makes and the actions one takes. The problem with group-think is that it stills the free flow of idea, and it breeds segregation and antipathy toward those with whom one disagrees.

We see the same illiberal sense in the U.S. Senate. Singlehandedly, Harry Reid is in the process of destroying the world’s greatest deliberative body. Like a hissing cat, he spews venom. Is it right to turn the Senate into a vehicle that condemns free speech and pillories those who disagree? For years the Koch brothers have used their vast financial resources for political purposes, but also to make the world a better and more pleasant place. It has to be expected that people with such resources, no matter their ideology, will support causes that benefit them and/or their businesses. But the Kochs have done far more. They have supported museums, hospitals, schools and colleges with millions of unrestricted dollars. Have George Soros, Tom Steyer or Warren Buffett done as much? The Kochs generally operate quietly, behind the scenes. Senator Reid has single handedly made them public – an enemy to those on the hard Left, but an example of generosity to others. It is Mr. Reid’s vitriol that is so unseemly. There is not the same level of meanness on the Right toward those like Mr. Soros and Mr. Steyer.

Certainly Republicans can be discordant and managing them is akin to herding cats, as John Boehner well knows. One might argue that Republicans are polysemous, in the sense that they represent a broad diversity of ideas. Republicans have had a harder time enlisting groups like Hispanics, Blacks, gays and young, single women because they don’t compartmentalize them. They consider each person an individual capable of thinking and deciding for herself or himself. The concept of going after the “Black” vote, the “Jewish” vote, or the “Twenty-something” vote is degrading to the individual being targeted. Are not concepts of liberty, justice and responsibility more important? How do we best grow the economy and increase employment? How do we ensure the safety of people without infringing on their basic human rights? Such an approach is more respective and, frankly, more liberal, because it values ideas over the color of one’s skin, one’s sexual preference, or one’s creed. But it is a concept harder to sell because it appeals to the intellect, not to the heart.

The emergence of two organizations over the past few years demonstrates the sharp contrast between Democrat and Republican. The Tea Party was a grass-roots response to what was seen by many as government overreach manifested in enormous deficits – first by George W. Bush and then by Barack Obama. Occupy Wall Street was a contrived response by the Democrat elite to what appeared to be favorable treatment of Wall Street and banks versus Main Street in the aftermath of the 2008 financial crisis. More cynically, it was a jealous response to the success of the Tea Party. Occupy Wall Street gave rise to the plight of the 99% and was the genesis of today’s “inequality” message. It received favorable press from mainstream media, but because it was not a “grass-roots” organization it has largely faded away. On the other hand, and much to the consternation of mainstream media who have done their best to trivialize and demonize them, the Tea Party persists. Their success, as Stephen Moore recently recounted, can be seen in shrinking federal deficits, a function of decreased spending imposed by House Tea Party members.

It is impossible to imagine a Republican Senator talk of introducing a Constitutional Amendment to limit free speech, as did Harry Reid last week, in endorsing limitations on campaign spending. (I happen to agree that there is too much money in politics, but I believe the answer lies in term limits and in full disclosure of all those who contribute to campaigns or PACs. Leg
islating limits doesn’t work. It favors incumbents and provides opportunities for smart lawyers.) Keeping constituents properly categorized allows Democrats to appeal to specific cliques. It simplifies the process and avoids the complication of having to respond to individuals whose ideas may differ from those with whom they have been grouped. Black conservatives drive liberals crazy. They cannot understand how such a person could argue against the interests of their group. Democrats forget that thoughtful people think independently. While their heritage, sex, color and creed influence their thought processes, fundamental concerns regarding liberty and personal responsibility take precedence.

We are individuals. It doesn’t take a village to raise a child; it takes the love and care of a mother and father. Of course we need the public schools that government provides, but maternity and paternity are positive influences that should be encouraged. Laying off responsibility breeds indolence. Likewise, it takes individuals with smarts, grit, sweat and tears to build a business. Granted the entrepreneur gets help along the way, but the motivational drive to succeed is personal. “You didn’t build that,” is as demeaning as it is erroneous.

We are a nation of peoples from all over the world. We represent every nation, race and creed that exists. As our Great Seal proclaims, out of myriad individuals we have created one nation. We are individuals, not political voting blocs to be pampered or catered. The compartmentalization of people is convenient for politicians, but is dangerous for our long term success. There is strength in diversity, but it is in the freedom of thought and the diversity of ideas that the steel that is our nation’s resolve becomes tempered and strengthened.