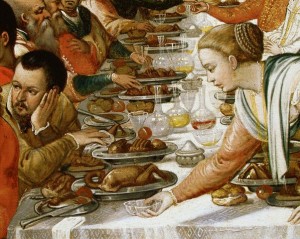 An unexpected revelation from two days spent in Indianapolis at a Liberty Fund-sponsored colloquium last week on Calvin Coolidge was learning a new word, “suffonsified.” The Liberty Fund, based in Indianapolis, is an organization devoted to teaching the precepts of liberty, as described in our Declaration of Independence, the Federalist Papers, and the Constitution and Bill of Rights.

After a particularly big lunch at Fogo de Chao, one of the conferees told me that his grandmother used to lean back after such a meal, with a smile on her face, and declaim: “I’m suffonsified.” While I had never heard the term, it is a word, at least according to the “Urban Dictionary.” It is Canadian in origin and has relevance, in my opinion, to the study of Coolidge and concerns of today, but, of course, for opposing reasons.

When one thinks of the thirtieth President, the words economy and restraint come to mind; whereas exorbitance and hubris better mark today’s occupant of the White House. Despite Coolidge being noted for his silence, he spoke frequently. Reading his speeches, along with his autobiography, one is struck by his great knowledge, his beautiful use of language and his persistent references to the ideals of the founding fathers.

While he was a product of the 19th Century (he was born in 1872, so was 42 when World War I erupted), Coolidge was the first “modern” President, in that his Administration coincided with the incredible commercial developments of the “roaring” ‘20s.  (Warren Harding was only President for two and a half years, and his last year was tainted by scandal.) Radios, cars, planes and telephones had all been invented earlier, but became commonplace during the 1920s. In 1920, about one-third of all homes had telephones. By the end of the decade, the number had doubled to roughly two-thirds. In 1920, 35% of all homes were electrified. By 1929, 68% were. That meant toasters, washing machines, electric stoves, irons, etc. – labor-saving devices for the home. Packaged foods added convenience and saved time. Birds-Eye frozen foods and Del Monte canned foods arrived on grocery shelves during the decade, as did Wheaties, Jell-O and Planter’s Peanuts. By 1925, the Ford Motor Company was producing two million Model T’s a year. In all, the company produced 16.5 million units – a record for a single model that remained unsurpassed until Volkswagen’s Beetle bested that record in 1972. Consumer products and autos brought with them, however, the concept of installment buying. And, as we all know, the margin requirement on stocks was 10% when the decade ended, and stocks crashed.

Amid this prosperity and growth, Coolidge’s words came across as a governor, a restraint on excess. His Vermont upbringing abhorred the concept of speculation and show, and even debt. But he did not see government as a caretaker. If people could reap rewards, they had to be held responsible for their losses. He understood the importance of history and had a clear understanding of the nature and uniqueness of our founders and the representative government they created. That is not to say that he did not celebrate economic growth, for he did. But in his speeches there was an emphasis on the spiritual as being more important than the material. In a speech at Wheaton College in June 1923, he said: “We do not need more of the things that are seen, we need more of the things that are unseen.”

Character, morality, self-reliance and forbearance were important to him. He knew that government, through elected representatives, reflected the will of the people. He wanted to ensure that the electorate was educated in the rudimentaries of their country’s past, so they would be better able to deal with the present. He knew that only an educated voter could ensure the maintenance of our enduring but fragile government. As a product of Yankee thrift, he feared people losing the proper balance between the secular and the nonsecular so necessary to living both freely and prosperously.

Mr. Coolidge was surely aware of Benjamin Franklin’s admonition to the Continental Congress, as the process of ratification was underway, on September 17, 1787. At the age of 81, Franklin was almost twice as old as the average delegate. With age had come wisdom. In his speech, Franklin said he agreed “to this Constitution with all its faults.” He said that it “may be a blessing to the people if well administered.”  (Emphasis is mine.) He added: it is likely “to be well administered for a course of years, and can only end in Despotism, as other forms have before it, when the people become so corrupted as to need despotic government, being incapable of any other.” As a student of human behavior, Franklin was aware of the failings of man. His words were an endorsement, but with caveats. “Thus, I consent, Sir, to this Constitution because I expect no better, and because I am not sure that it is not the best.” He concluded by urging his fellow delegates to get beyond approval and concentrate “our future thoughts and endeavors to the means of having it well administered.”

It is the “well administered,” as it applies to government today, that should concern us. Since the 1930s, the nation has been tilting left. Even before that, the federal government had been assuming more power and the Presidency was becoming more isolated and more imperial. In his autobiography, published in 1929, Coolidge sounded cautionary alarm bells that today seem remarkably prescient: “It is difficult for men in high office to avoid the malady of self-delusion. They are always surrounded by worshippers. They are constantly, and for the most part sincerely, assured of their greatness. They live in an artificial atmosphere of adulation and exaltation, which sooner or later impairs their judgment. They are in grave danger of becoming careless and arrogant.”

A compassionate government is good, when the fruits of compassion are received by the impoverished, the sick and the elderly. But when those gifts are extended to almost half the population, it suggests one of two things, neither good. Either we have become too poor or too generous. In fact, in a remarkable léger de main, Mr. Obama has made both prospects come true.

With a federal stimulus that did not stimulate, quantitative easing that brought profits to big Wall Street banks but did nothing for Main   Street, a federal bailout of GM that saved unions, but violated contract law, the recovery has been the weakest in the last sixty-five years. Further suffocating the feeble embers of economic growth, the government has raised taxes and increased regulation regarding the environment, banks and healthcare. Labor force participation remains three million below where it was in 2007. The poverty rate, at 15%, is the highest it has been since the early 1960s and matches the levels reached in 1982 and 1993. Joining the wealth and income gaps is a “jobs” gap. Four and a half years after the recovery began the unemployment rate among those 16 to 24 is 15.5%, versus 6.7% for those between the ages of 25 to 54.The gap is the highest it has been in over two decades.

There is no question; Americans are a generous people. In 2012, charitable giving by individuals amounted to $316 billion. But Washington politicians are even freer with our tax dollars. We spend about $80 billion a year on SNAP (Supplemental Nutritional Assistance Program), commonly known as Food Stamps, and $520 billion on unemployment insurance. In total, federal welfare spending in 2012 totaled $746 billion, according to the Washington Times, or 21% of the federal budget.

From a fiscal perspective, the situation is tenuous and difficult to address. No politician wants to be known as the “Scrooge” of Washington. At some point, government runs out of “other people’s money.” We should be reminded, as Coolidge did frequently to his constituents, that every dollar sent to Washington is one dollar less in the hands of taxpayers, and one dollar less that can be reinvested privately in the economy.

There is a level where recipients of welfare become dependent and lose their sense of personal responsibility. The problem is that, in a country of our size, there is no clear line that distinguishes between the truly needy and those who are capable of being self-reliant but who have become addicted to government handouts. Thus we err on the side of compassion. In doing so, however, we risk a downward spiral in which entitlement spending prevents us from focusing on economic growth. We risk debauching the currency and ignoring a weakening infrastructure. We lose sight of the lesson Coolidge never lost sight of – the purpose of government is to protect our liberties, not to protect us from ourselves.