Support for Israel – Are We Wavering? 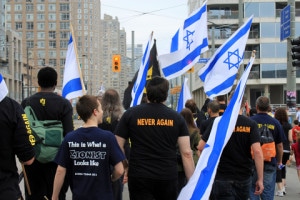 A lot of ink has been spent in recent weeks – and deservedly so, given the gravity of the situation – on the Israeli-Palestinian flare-up that followed the killing of three Israeli teenagers, and the subsequent revenge killing of a Palestinian youth. People far more qualified than me have written endlessly on the subject, but I did want to insert my oar.

What is concerning is the growing animosity on the part of the media and people around the world toward Israel. The media is careful that their criticisms are not cocooned in terms that could be interpreted as anti-Semitic; nevertheless they are disturbing. They are subtle, but insidious in their subtlety. Examples of what I mean could be seen in a couple of front page photos in Wednesday’s newspapers. One by Mohammed Saber of the European Pressphoto Agency that appeared in the New York Times showed smoke billowing “after an Israeli attack on Gaza City.” Another, an AP photo in my local paper, The Day, by Khali Hamra, showed Palestinians trying to salvage what they could from the rubble of a house “destroyed by an overnight Israeli airstrike in Gaza City.” Should either paper be accused of bias, they could point out that on inside pages reporters do mention rocket attacks on Israel. That is true. They do, but that doesn’t take away from the visual image one gets from skimming the story – that Israel is the aggressor, using overwhelming force against a smaller and weaker neighbor.

But it is Israel that responded to the killings in the way civilized nations ought. They arrested six Israeli youths as suspects in the brutal killing of the Palestinian teenager. Has Palestine arrested, or held anyone in connection with the equally brutal murder of three Israeli teenagers? Of course not. It is Israel that has made an effort to limit civilian casualties. They call occupants of houses known to harbor terrorists, urging them to get out, and fire warning shots in attempts to reduce civilian casualties. It is Hamas that indiscriminately lobs rockets at Beersheba, Rehovot, Jerusalem and Tel Aviv. And it is Hamas that urges occupants of targeted homes to remain as they are, to act as human shields, to be used as pawns on the PR battlefield being fought in world-wide media.

A sentiment often attributed to Joseph Goebbels or Adolph Hitler, but one which is true is that if you repeat a lie (or a story) often enough, it becomes accepted as gospel. George Orwell made a similar observation in his dystopian novel, 1984. He wrote, “In a time of universal deceit, telling the truth is a revolutionary act.” That, in my opinion, is what is happening in the saga between Israel and the Palestinians. The Israelis are being portrayed as the aggressor, against less well-equipped Palestinians. Little is made of the terrorist organization Hamas, which occupies Gaza and shares power with Mahmoud Abbas’ Fatah Party, a political party that emerged from the Palestinian National Liberation Movement.

In this battle between Jews and Muslims, it is David who is considered the bully, not Goliath. Jews, like Muslims, descend from the Aramaen people who lived in the region during the Bronze Age, about 5000 years ago. Ironically, the Jewish religion spawned Islam 1500 years ago, just as it did Christianity 500 years before that. Two thousand years ago, the ancestors of today’s Middle Eastern Muslims, including Palestinians, were Jews. It is religion, not blood that divides the two; it is religion and the different cultures those religions have produced that have created much of today’s animosity.

We should not lose sight of the fat that instinctively we hold the Jewish people to a higher standard than their Arab neighbors. Nor should we forget that that distinction is due to cultural differences. But that recognition should not mean excusing the hatred of Arabs toward the Jews; nor does holding Israel to a higher standard justify the unnecessary blaming of Jews for acts of self-preservation.

Sixteen countries comprise the Middle East, ranging from Egypt on the West, to Turkey on the North, Iran on the East and Yemen on the South. Approximately 360 million people live in the region, with three countries – Egypt, Iran, and Turkey – housing 240 million, or roughly two thirds of the region’s population. Roughly 95% of those three countries’ populations are Muslim. Iraq and Saudi Arabia are the 4th and 5th largest countries, with a combined population of about 65 million, of which 97% are Muslim. Other than Israel, the country with the smallest Muslim population is Lebanon, which is 60% Muslim. Israel, the only democracy in the region, sits in the midst of this tinder box with a population of just over 8 million, of which 17% are Muslim. In other words, with less than 2% of the region’s population, Israel is confronting 350 Muslims, many of whom have sworn to “wipe her off the map.” Only three Middle East countries have diplomatic relations with Israel – Jordan, which has full relations, as does Egypt even though polls indicate that 92% of the population sees her as an enemy. Turkey, the third nation to have ties with Israel, has recently downgraded relations. Israel is an island in a tempestuous sea.

Yet, the world increasingly blames Israel. The Financial Times editorialized more flatulently than diplomatically, when they suggested both sides show “restraint.” That’s easy to say when one is in a fancy office in London’s Threadneedle Street, or wherever the editors of the FT sit. But restraint isn’t exactly what comes to mind if you are responsible for the people of a country under persistent rocket attack and under the threat of terrorist kidnappings. It wasn’t restraint that Churchill deployed when London was under attack.

Israel is a narrow country that runs from the Negev Desert in the south to the Sea of Galilee and the Golan Heights in the north. It is about 280 miles long, south to north, and perhaps 80 miles across at its widest point. The country is smaller than Lake Michigan and about 30% larger than New Jersey. The West Bank takes a sizable bite out of its eastern border, while the Gaza Strip removes a smaller piece from its southwestern border. Both are now Palestinian territories, with Gaza under Hamas control. While Israel withdrew from Gaza almost ten years ago, that has not stopped a rain of mortars and rockets fired into Israel.

Gaza, which borders on Egypt, the Mediterranean and Israel, is a narrow strip of land with a long history. It is the crossroads of two continents, Asia and Africa. It has long been home to the Jewish people. It has repeatedly fallen to invading armies, from the Assyrians to the Egyptians, from Romans to Alexander the Great, from Christian Crusaders to the Ottomans to Napoleon. In each instance, in some cases years later, Jews have returned. In 1967, Israel liberated Gaza from Egyptian occupation. In 2001, the Palestinian Authority began pounding restored Jewish settlements in Gaza. In 2005, as part of the Disengagement Plan, Israeli Prime Minister Ariel Sharon forcefully evicted 10,000 Jewish villagers and farmers, on the expectation that a civilized and peaceful society would emerge. But, instead of peace, 20,000 rockets have been launched at Israel in the ensuing nine years. Three times since, the Israelis have had to send troops in to Gaza to stop the shelling of Israeli villages and cities. They may do so again, even if it does upset the United Nations, especially Europe and the United States.

My intent is not to suggest that Israel is beyond all blame, but to try to put in perspective the difficulties the people and the nation face. Israel has been a state for just over 65 years. From what was largely a desert wasteland, without any oil, they have created a nation that today has the fourth highest GDP per capita in the region (after the oil-rich countries of Qatar, Kuwait and the United Arab Emirates.) They have done so with the only truly democratic state in the region, and against overwhelming odds, as most of their neighbors do not recognize them as a legitimate state. It was Europe and the United States that sent the Jewish people to Israel following a war in which their ranks were decimated.

Israel has few friends, as can be seen in numerous United Nation resolutions. And, if the reports we read are accurate and if columnists are reflective of current moods in European capitals and the U.S., then the number of friends is diminishing. The bulwark of their support comes from the United States. Yet major U.S. newspapers, like the New York Times and the Washington Post, appear to blame the Israelis more than Hamas for the hostilities. What they fail to realize is that if we hesitate in our support, Israel could cease to exist.

It is this fundamental possibility that should be considered by all those who increasingly seem to be wavering in their support of Israel. While our economic interests and ties have long been with Arab dictators, our moral and cultural ties are with Israel. That should not be forgotten. Benjamin Netanyahu is usually portrayed as belligerent – unwilling to compromise, unwilling to settle, unrestrained, to borrow a phrase from the FT. I agree. He is. But how can he be otherwise given the enemy he faces, and the history he and his people have experienced?