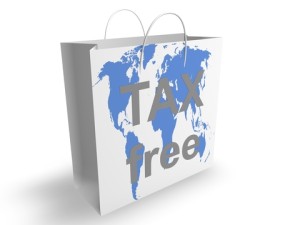 Tax evaders will have their way.

In December, I visited Switzerland to do firsthand research into trends in Swiss banking. The highlight was a visit to les Ports Francs de Genève, one of the world’s largest freeports. Descending in the elevator into its basement and being guided through the many high-security vault doors, I felt like I’d entered into a Jason Bourne movie.

Freeports have become the next generation of tax avoidance—that is, legal tax evasion. Valuables (often precious metals, art, and diamonds) stored in freeports are protected from taxes and tariffs for the length of their storage.

Freeports have an impressive history. They arose from the legal exemption that items “in transit” receive from taxes and tariffs. It was expected that this exemption would only be temporary as shipped goods transferred between planes or were temporarily stored while awaiting shipment to their final destinations. But investors quickly realized another, more profitable use for them. Because there was no limit on how long something could be “in transit,” freeports offered an innovative solution for avoiding taxes and tariffs on high-value assets.

This system allows stored assets to appreciate in value, and it also allows for tax-free sales. An item can enter a freeport, stay there indefinitely, and trade ownership an unlimited number of times.

Demand for space has surged to unprecedented levels. At the time of my visit a few months ago, les Ports Francs had only a few small open spaces available. They were finishing an additional facility that would add more than 65,000 square meters of space—which was already fully reserved.

The phenomenon isn’t confined to Switzerland: A number of locations are competing for market share.

Singapore opened a freeport in 2010, which is now nearly full. A new freeport facility in Luxembourg is scheduled to open in September. Beijing is creating a zone specific to art.

The increase in demand has been attributed to the increasing crackdown by world governments on tax evasion. The U.S. government’s FATCA law is certainly the most draconian of these efforts. FATCA essentially turns any bank anywhere (if it has U.S. clients) into a branch of the IRS. And, though their behaviors are not quite so extreme, the governments of the UK and China have announced their own crackdowns on tax evaders.

But freeports are just one of many legal solutions individuals have discovered to avoid taxes. The news has been full of stories recently of individuals renouncing their citizenship to avoid taxes. Corporations like Pfizer and Starbucks have made waves for their strategic tax moves.

When we think about innovation, industries like technology, energy, and engineering come to mind. Tax avoidance is usually not associated with innovation. But all these examples and many more prove that the market will innovate to meet human desires of any kind—even the desire to avoid taxes.

Tax avoidance is governed by the law of supply and demand just like every other commodity in the economy. So the heavier the tax burden, the greater the demand will be for tax avoidance services. Greater demand for tax avoidance will encourage more research into legal loopholes, the creation of more innovative solutions (like freeports), and previously unimagined innovations like the Floating City Project.

One has to wonder, too, if recent trends toward more simplistic living are not somehow (perhaps subconsciously) connected with the desire to reduce the tax burden. Growing movements like vagabonding, the small-house movement, and the New Rich movement’s emphasis on the “currencies of time and mobility” display a trend of disillusionment with storing up anything the government can steal.

Only the libertarian perspective offers a coherent explanation of these trends. Taxation is theft. People who anticipate theft do one of two things. They seek ways to protect their wealth or they despair and reduce their lifestyle down to the point of having nothing worth stealing. We can see both occurring in our world at increasing rates.

Thankfully, the thief faces a constant uphill battle in this scenario. The law of supply and demand creates the perfect storm for the ultimate failure of the State. As the State increases its tax burden, it creates these two self-destructive trends for itself. More people work and work harder to protect their wealth, and those who decide it’s too hard to protect their wealth just make do with less.

In the future, we can expect more innovative tax avoidance solutions and possession-less lifestyle trends, not to mention straight-up resistance. Who knows what lengths the government will go to in order to confiscate wealth? But I am optimistic that its agents will be no match for a globally connected network of savvy wealth creators.

The views expressed on AustrianCenter.com are not necessarily those of the Austrian Economics Center.
hayek_admin2019-01-14T06:17:28+01:00