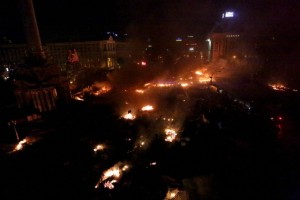 Kiev is defiant these days. Protesters have occupied Maidan since November. Initially their main motto was “Integration with the European Union,” so the movement is called Euromaidan.

But a lot has changed since then.

Victor Yanukovich, president of Ukraine, used to call integration with the EU his main policy objective. Every state television channel and every state newspaper said Ukraine’s destination was Europe – and only Europe. But suddenly, in the middle of November, after meeting with Russian President Vladimir Putin, Yanukovich — primarily on his own initiative– changed his mind. The country’s policy changed accordingly.

Yanukovich announced that Ukraine would stop negotiating with the EU and start with Russia, over joining the Eurasian Union — Putin’s neo-imperialistic project. The reward for that pivot is $15 billion in Russian taxpayer money and big discount for Russian gas.

A lot of people in Kiev still remember the Orange Revolution of 2004. It took place in Maidan as well. Thousands of Ukrainians came to Maidan again. Like nine years earlier, it was a peaceful protest. But by the end of November only about 300 people were there each night. Then late on November 29 the police decided to clear the Maidan. They arrested and beat a lot of people.

It was like adding oxygen to a fire — the fire burned more intensively. More people took to the streets in the following days and refused to leave. They built camps and barricades. Protesters and police clashed again. Now hundreds of thousands of people come to Maidan each Sunday afternoon. The event that brought managers, pensioners, and students together is called Narodnoye veche, following the tradition of public assembly in Novgorod Republic.

In early January I followed the Khreshchatyk to Maidan. Despite the freezing temperature and late workday night, many people were in the square. Maidan is a great example of self-organization and crowdfunding. There are no police — and there is no crime. People provide money for everything — security, warm food, a variety of goods, garbage collection. There is even an outdoor theater, where the Open University of Maidan offered free lectures on economics, politics, and related subjects.

But that did not last. In the middle of January the parliament violated its own procedures and approved new restrictions. They looked much like Russian laws: foreign-agent status for nongovernment organizations that receive money from abroad; a prohibition on participating in mass protests, with the punishment increased to up to 15 years in prison; and the blocking of websites without judicial approval.

The next Sunday even more people went to the streets. The same laws in Russia brought out no crowds, only some activists.

Much has changed with the Ukrainian protest. It is not a protest “for something,” but a protest “against something”: Yanukovich. People were dissatisfied with what opposition leaders were saying, namely, that they would continue to negotiate with Yanukovich.

So instead of returning home after Narodnoye veche, as usually happens, a few thousand people moved toward the parliament and government area on January 19. Police and special forces crossed Hrushevskoho Street, where a big fight took place. Most everything reported in the western newspapers and on websites about the confrontation has taken place there. Despite some pauses, a fight for this street goes on now. Protesters have built new barricades. Five protestors have been killed, some by gunfire.

Yet they have achieved some goals. Prime Minister Nikolay Azarov resigned and left for Austria, where he has a house. The restrictions approved in January were repealed. But the main goal has not been achieved: Yanukovich is still the head of the state.

For Ukrainians the EU is mostly a political choice. Most look forward to being part of Europe. As Vitaliy Klitschko, one of the opposition leaders, said: “We are just tired” — tired of corruption, tired of courts that are subordinate to the regime. People are also tired of crony capitalism, which is associated with the current regime of Yanukovich, whose son is a millionaire. They would like to live in Europe with its rule of law rather than in union with Russia, even with cheap gas.

Ukraine is sometimes not taken seriously by the Russians, but these days they feel envy and admiration.

The views expressed on AustrianCenter.com are not necessarily those of the Austrian Economics Center.
hayek_admin2014-02-19T10:18:51+01:00