“For 215 days, we have only worked for the Austrian state,” says Barbara Kolm, Director of the Austrian Economics Center and President of the Hayek Institute. At least compared to the previous year, this year’s Tax Freedom Day (TFD) in Austria is eleven days earlier, taking place this Saturday, August 4.

Until TFD, Austrians have sent their entire income to the state through taxes, fees, or other levies. In that sense, TFD might also be called “Taxpayer’s Memorial Day,” but then again, it is at the same time the first day of the year in which the wealth that is accumulated finally doesn’t need to be sent to the government. As Kolm argues, “to make it clear, from now on we work for our own purse.”

We at the AEC have calculated the Tax Freedom Day since 2010. For that, we put taxes and levies (direct ones like income, indirect ones like sales taxes) in relation to the income of households and companies. The resulting percentage will be adjusted to 365 days, and there’s the TFD right away.

Comparing Austria to other countries is certainly depressing for us: the German Taxpayer’s Association, also using national income, found that in Germany TFD was on July 18 (2017 it was on July 19). Meanwhile, Americans can be happy about their early TFD: in the US, it was on April 19 this year. 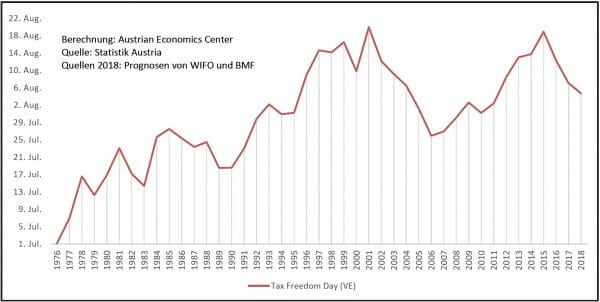 As our researcher Martin Gundinger explains, looking back up to 1976 shows that TFD has been moving consistently to a later and later point. While it was still only on July 1 in 1976, it hit a high point in 2001, when it was on August 20. After that, TFD very shortly moved back to earlier stages again, but rebounded and until 2015 moved to earlier heights. Since then, it has improved again.

“We shouldn’t rest on this trend, and further important reforms to reduce taxes and levies, and to strengthen economic growth, must be implemented,” says Barbara Kolm. The Austrian Tax Freedom Day is moving in the right direction, but much more needs to be done.

Find a press release in German on the Hayek Institute page!