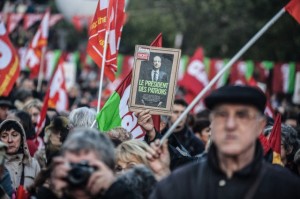 France’s sovereign rating was recently downgraded by Standard & Poor’s, which doubts the government has the means to reduce its budget deficits. Indeed, French officials find it more and more difficult to levy higher taxes, as tax revolts erupt across the country, such as with the famous “red hats” in Brittany, reminiscent of the 17th-century popular revolts against government stamps.

With the tax burden at 46 percent of GDP, the French have reached the point of “tax nausea.” Moreover, creative people find it more and more difficult to accept the constant change in the tax rules. The current government has brought tax uncertainty to a record level, “experimenting” with new taxes such as the 75 percent tax on the rich; a tax on EBITDA (earnings before interest, taxes, depreciation and amortization), which was quickly replaced by an “exceptional” increase in the corporate tax rate; and the “Eco-tax,” which brought anger in Brittany. And tax retroactivity has become common now.

Given this context, one should not be surprised at another, yet silent, tax revolt: the flight of people, many of them entrepreneurs, from the country.

Some of them are rich people who are just fed up with paying taxes that they feel have become an extortion racket at the expense of successful, creative, and entrepreneurial minds. Gerard Depardieu, who last year famously fled to Belgian village a few yards from the French border, is probably the archetype of this tax exile.

Some of them are young and not rich yet, but are frustrated by the complexity of regulation and the cost of doing business in France: they fly to New York or London, where they can much more easily develop their talents.

Increasing tax exile is causing France to lose its vital forces at a higher pace. Jean-Philippe Delsol, a tax lawyer and member of the Institute for Research in Economic and Fiscal Issues in Paris, has just published a book in French, Why I Am Going to Leave France,” in which he estimates the annual number of tax exiles at 5,000. While an exact count is difficult, Delsol intersected data from insurance companies, tax lawyers, and the tax administration. The figure reflects a clear acceleration; in the recent past the exiles numbered in the hundreds, not thousands. The book is the “synthesized” story of Delsol’s clients who left or are thinking of leaving their beautiful country for greener pastures — not only because of higher and unstable taxation, but also because of the “scapegoat mentality” that has increasingly come with it, as if being hard-working, successful, and rich was a sin.

It is high time, then, that instead of growth-killing tax increases, the French government tried to cut its spending from the unsustainable level of 57 percent of GDP.  The problem is the vested interests that welfare-state spending generates.

Delsol estimates that half the French population lives off the state, meaning the taxpayers’ money — or 14.5 million people: a pretty big lobby. The figure combines civil servants (5.2 million, a staggering 22 percent of the workforce), the unemployed and the minimum-income beneficiaries, the staff of state-owned companies and state-funded nonprofits, plus farmers, whose incomes rely heavily on subsidies.

Welfare states excel at making people rely on other people’s money — “social spending” (for health, pensions, and so on), which in France accounts for one-third of GDP. Dependency is thus very large.

But it’s worse, because France’s so-called “social model” is actually corporatist and centralized, as depicted by French economists Pierre Cahuc and Yann Algan in The Mistrust Society. Each organized profession, including teachers, farmers, nurses, and local civil servants, negotiates its “social advantages” with the government out of the common pool of resources. This has leveraged the extent of “mutual plunder,” a phrase coined by Frédéric Bastiat, a 19th-century French economist, and has generated a society of mistrust where dialogue across civil society – and thus peaceful reform — are virtually impossible.

Another issue in France, crucial to understanding its level of government spending, is its lack of government accountability. A dysfunctional Parliament does not really control budgets. Then within the dual executive power, the prime minister can be used to protect the president from responsibility – effectively making both non-responsible.

In addition, continuing process of regional and local fiscal decentralization (but not autonomy) permits each layer of the complex administration to use more money than necessary from other levels of government – breaking de facto the accountability link between local taxation and delivery of local government services. These are pretty bad incentives for good governance. Here, again, reforming that complex monster seems extremely difficult.

Opinion polls show that the French now tend to agree on the need to reduce government spending. Unfortunately they do not agree on what items to reduce first: it’s the same old “others before me” attitude.

True, Prime Minister Jean-Marc Ayrault talks about the need to reduce government spending and to overhaul the French tax system. But the timeline for overhaul extends three and half years to the end of the president’s term, and one of the goals is destructive: to “reinforce tax progressivity.”

It’s hard to see how the rate of French tax exile will not accelerate.

Emmanuel Martin is an analyst for LibreAfrique.org and director of the Institute forEconomic Studies – Europe

The views expressed on AustrianCenter.com are not necessarily those of the Austrian Economics Center.
hayek_admin2014-01-27T10:00:09+01:00