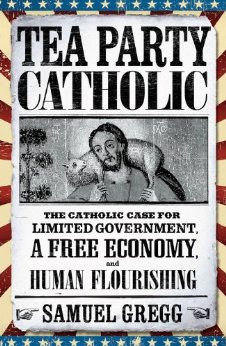 Can a believing Catholic support free markets? Does the Catholic social justice commitment translate directly into big government? Do limited government Catholic Americans have something unique to contribute to the Church’s thinking about the economic challenges confronting all Catholics around the globe?

In Tea Party Catholic, Samuel Gregg draws upon Catholic teaching, natural law theory, and the thought of the only Catholic Signer of America’s Declaration of Independence, Charles Carroll of Carrollton—the first “Tea Party Catholic”—to develop a Catholic case for the values and institutions associated with the free economy, limited government, and America’s experiment in ordered liberty.

Beginning with the nature of freedom and human flourishing, Gregg underscores the moral and economic benefits of business and markets as well as the welfare state’s problems. Gregg then addresses several related issues that divide Catholics in America. These include the demands of social justice, the role of unions, immigration, poverty, and the relationship between secularism and big government.

Above all, Gregg underlines how economic freedom’s corrosion in America is undermining the United States’ robust commitment to religious liberty—a principle integral not only to the American Founding and the life of Charles Carroll but also the teaching of the Second Vatican Council. As a creative minority, Gregg argues, limited government Catholics can help transform the wider movement to reground the United States upon the best insights of the American Experiment—and thereby save that Experiment itself.

“In Centesimus Annus, Blessed John Paul II called for a ‘society of free work, enterprise and participation.’ In Tea Party Catholic, Samuel Gregg has put flesh on the skeleton. His work will reignite interest in the critical notion of the common good. Furthermore, it will help educate upcoming generations about the richness, diversity and necessity of Catholic Social Teaching.  It is a remarkably good read!”

“Samuel Gregg is the intellectual leader of the second generation of Catholic proponents of limited government, religious liberty, and economic freedom. . . . Gregg’s book has things to say to all Catholic Americans, regardless of party-allegiance . . . but also to Catholics living outside America.”

Michael Novak, author of The Spirit of Democratic Capitalism and Washington’s God.

“There is abroad in the land a mistaken belief that Catholic social teaching is friendly to the entitlement society and hostile to limited government, the market economy, and economic freedom. A refutation of this error is long overdue, and now at last Samuel Gregg has provided it in Tea Party Catholic. The book is as carefully and, indeed, rigorously argued as it is provocatively titled. It is a great resource for anyone—Catholic or not—who wants to know what the Church really teaches about the moral requirements of the socio-economic and political orders.”

“A stimulating reading of Catholic social teaching and the American Founding and its application to some of today’s most sharply contested public policy issues, particularly those touching on economic and religious freedom. Give it to your favorite Commonweal reader and let the debate begin!”

“Rarely is a book so timely as this one.  Some might say that Samuel Gregg has gone a long way towards reconciling the ideal of liberty, especially its economic and religious dimensions, expressed in the American Founding with the Catholic Faith. Actually, he has masterfully demonstrated the complementary and perhaps even Providential nature of this relationship.  Gregg’s clarity and scholarship are impressive and incisive.”

Frank Hanna III, businessman, philanthropist, and author of What Your Money Means: And How to Use It Well.

Be the first to review this item:

The views expressed on AustrianCenter.com are not necessarily those of the Austrian Economics Center.
hayek_admin2019-01-14T06:43:37+01:00