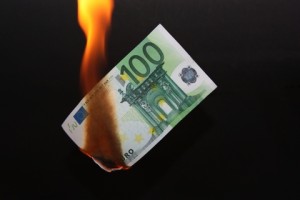 Inflation, defined as an expansion of the supply of unbacked money, is an elementary evil, always and everywhere that it occurs.[1] It is the ignored and core cause of numerous problems in the economy and in society, including:

Increasing the money supply that involves the granting of more credit means that new money is created by credit that is not covered by savings. This causes interest rates to fall more than would be the case without an expansion of the money supply. The result is an artificial economic boom, which politicians and the general public initially welcome. Investments are triggered that would not have been carried out if the invested capital had to be saved up first, prior to such investments. Therefore, there are insufficient resources available to bring all the projects thus begun to completion. In addition, resources — which are by their very nature scarce — are not brought to bear where they are most needed — in the most urgent projects. When interest rates climb again, the malinvestment comes to light, and a crisis — a bust — results. To overcome the bust, the central bank then reduces the interest rate again. A crisis that would clean things up is thus not allowed to happen, because it is politically undesirable.

An un-backed expansion of the money supply causes the prices of goods and services to rise. The parties who first receive the newly created money profit. They are able to make purchases at goods prices that still have not risen, whereas the later recipients of the money will only enjoy the benefits of the new money when the goods prices have already risen. They are put at a disadvantage and lose relative to the initial recipients of the cash. In addition, some market participants don’t gain anything from the newly created money. The initial recipients are the banks, the state, and large enterprises. This effect also occurs when the price of goods remains stable due to money expansion and would otherwise have fallen without an expansion of the money supply. In this instance, inflation is particularly nefarious.

3. Inflation Prevents the Price of Goods From Falling

Higher productivity and a strengthened division of labor in a national economy allow the quantity of produced goods and services to rise. If the money supply were to remain unchanged, or would rise or to a lesser extent than the quantity of goods, this would led to a falling overall price level. Expanding the money supply prevents such price decreases. The European Central Bank (ECB) has defined a reference value by which the most broadly defined money supply, M3, should ideally rise. This reference value is at present about 4.5 percent per year. The argument that is used is to always maintain price stability. Deflation, which is incorrectly interpreted as a sinking price of goods, is said to be broadly damaging to the economy. Broad swaths of the population are thus prevented from taking part in a just share of productivity increases and a strengthened (international) division of labor.

The expansion of the money allows the state to go into debt more easily and at lower interest rates than would be the case without monetary expansion. Due to that, expenditures can be financed that otherwise have to be financed by raising taxes. Politicians make use of this, particularly before elections. They thus can promise “benefits” that otherwise would not be able to be financed. People willingly take the bait and want to be the first in line, not knowing, or repressing the fact that they themselves are the ones financing the “big banquet.”

No one has formulated this better than the economist and philosopher Hans-Hermann Hoppe in Democracy: The God That Failed, writing:

Every form of government welfare — the compulsory wealth or income transfer from “haves” to “have-nots” — lowers the value of a person’s membership in an extended family-household system as a social system of mutual cooperation and help and assistance. Marriage loses value. For parents, the value and importance of a “good” upbringing (education) of their own children is reduced. Correspondingly, for children, less value will be attached and less respect paid to their own parents.

Placed before the choice of allowing a crisis that would clean things up after a boom and kicking the can down the road, the majority of the populace accepts the latter option. The debt of most market participants is too high to shoulder the burdens of a deflationary crisis. The fear of the loss of one’s job is just too much. Many people are also too dependent on state money transfers, state subsidies, and/or state projects.

Every recession that comes after a boom makes bad investments evident. The citizens demand that the state “make things right.” The state is called on to intervene and fix things. Politicians gladly take up this call and can justify their positions in that way. But every intervention results in further state intervention and creates a veritable “thicket” of interventions. In the end, state regulations penetrate and strangle the economy and society in the form of a multiplicity of laws and regulations.

Inflation reduces the purchasing power of incomes and of assets that are saved up. Thus, for example, when people invest their assets, a lot of time has to be used to compensate for the loss caused by the expansion of the money supply. This only happens with great time and effort, but mostly doesn’t. Purchasing power falls through people’s fingers like sand. Everyone literally chases every cent, envies their neighbor and his possessions, not knowing that the neighbor himself is up to his neck in debt. Charity and the willingness to help out falls among people, who are themselves just barely making it. Meanwhile, the sentiment “we already pay enough in taxes, so the state should do the charity work,” becomes more common.

Particularly for those who don’t earn much, inflation makes it increasingly hard or even impossible to accrue assets by saving. Prices, for example for energy and groceries, climb continually. Climbing the social ladder becomes harder and harder. Purchases become, for many, only possible by taking on credit. And paying off the credit becomes more and more of a burden. People are frustrated by their often hopeless situation. Frequently, this path leads to heavy debt and bankruptcy.

Resources and time are scarce. The artificial boom caused by inflation leads to investments that otherwise would not occur, or would occur at a later time. If projects have to be interrupted due to insufficient savings and/or rising interest rates, then scarce resources are used up, and — in many instances — can never be recovered. This means that more natural resources are used up than would be the case otherwise. The price of raw materials will tend to rise. In addition, the environment is damaged unnecessarily. Also, for inflation-induced infrastructure projects for which there is no real need, when viewed realistically, the environment is unnecessarily burdened.

[1] This is Rothbard’s definition found in Man, Economy and State: “Inflation is here defined as any increase in the money supply greater than an increase in specie.”