The Amazing Persistence of the Movie Theater 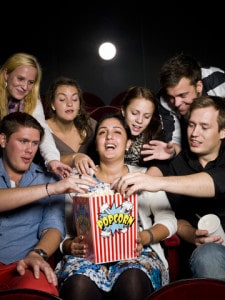 How utterly and completely wrong we can be. Even brilliant minds with all the evidence and trend lines on their side can err. Evidence suggests that the market—that mysterious amalgam of billions of tiny decisions that comes to be instantiated in the reality around us—is infinitely smarter.

In fact, the market constantly outsmarts us.

I submit as evidence the gigantic multiplex cinema that recently opened in my community. It is beautiful. It is dramatic. It is gigantic. It is fashionable. It is expensive to attend. And it is crowded most nights of the week—a madhouse on weekends.

When I travel and look for the movies, my smartphone app always seems to reveal a nice theater down the street from wherever I happen to be, rarely more than 10 miles away. The number of indoor screens has grown every year for 25 years, and today there are twice as many as there were in the pre-digital year of 1987, according to the National Association of Theater Owners.

Talk about defying expectations. These dinosaurs were supposed to die out sometime in the late 1990s. After all, we had VCRs. Why would anyone pay premium prices to go to the movies when you could just hop down to the rental house and enjoy the same content in the comfort of your own home?

Fox News even forecast, in 2006, “a time when a movie’s opening weekend means long lines at the video store, not at the multiplex.” The article, headlined “The Death of the Movie Theater,” was packed with statements from futurists who couldn’t imagine how theaters could survive given the technological trends. A quick search shows these predictions have been unrelenting since the start of the digital age.

And in 2006, people only knew a fraction of the nature of the competition that awaited us in video. DVDs and Blu-Ray were already mature. Then came universal file sharing and pirated online streaming. Then came the home theater, gradually creeping into middle-class homes. Then came the great price drops for big-screen televisions with amazing graphics and sound. Then came Hulu, then Netflix, then Amazon Instant Video, then DirectTV, then Chromecast, and so on.

It all seemed like a giant conspiracy to destroy the great American theater experience.

Or so the experts believed.

But here we are in 2014, DVD revenue is crashing, rentals are in a slump, and the theaters are still being built. They are still raising their prices. They still sell absurdly overpriced and salty popcorn—but, these days, in six different flavors. And they are as crowded as ever.

The experience is ever-more marvelous—and herein lies the key to their survival.

Rather than die, the theaters improved and provided more value. The food is better. Many serve cocktails. The seats are an experience in themselves. The scene is much more dramatic overall. And who could have predicted the return of 3-D glasses 50 years after they first amazed people in theaters?

It’s not complicated, really. It turns out that the market for entertainment is not a fixed pie. People who rent from Redbox, stream video online, groove to their home entertainment systems, and subscribe to Netflix also, implausibly maybe, still like to go to the movies! Who would have thought it? Well, entrepreneurs who take the risk, maybe. They took the risk that they could make the theater experience marvelous enough to pay for. They were right.

As I think back, I can recall having been completely wrong about this subject myself. Ten years ago, when the first modern multiplex was being constructed in my town, I, too, thought that these people were going to fail. I knew this for sure. All economic and technology signs pointed to it. But herein lies the beauty of the market: I wasn’t risking my own resources. Those who take the risk of being wrong pay the price or gain the gains, either way. It just so happens that they won.

Take a look again at the Fox News prediction that long line would form outside the video store while the movie theater would be empty. Whoops. There is no such thing as a video store today—a mere eight years after the prediction was made. Videos are as dead as Marley’s Ghost. DVD stores struggle for dear life and only really make a buck in rural areas. Redbox only exists thanks to extreme government enforcement of copyright. You can now buy old movies in 12 packs for next to nothing.

The piracy hysterics got into the act, and Hollywood, too. Death to those who would steal movies! Arrest all sharers of BitTorrents! Why? Because these people are robbing the movie makers of their justly deserved profits. But all the wars on piracy did nothing to slow the growth of torrents and streaming and piracy. It’s a global pastime to “steal” movies.

Meanwhile, theaters are still going strong. This year, in the United States, 1.33 billion tickets have been sold, a figure that actually exceeds that of the year in which technology was supposed to have displaced ticket sales over time. In fact, this year could be a banner year for movie theaters, with revenue exceeding $11 billion—about twice the revenue of 20 years ago.

You are reading this thinking, “Oh sure, I know why.” We all do. People love the big screens. We love the smell of the place. We like to see and be seen. We love the sound quality. Oh, and we absolutely adore being the first among our social set to see the cool new movie and comment on it wisely, even while those around us haven’t had the chance to check it out. We increase, they decrease. Yeah, that’s worth $14, sure.

We all get this. But you know what? It’s very easy to understand after the fact. What’s hard is seeing the future fact without any actual knowledge of what will happen. Every sign pointed to the death of theaters. After all, the DVD killed the video, and online services are killing the DVD, and it’s also true that we’ve never in history been able to bring such amazing entertainment into our own spaces as we can now. I can carry around a tablet capable of showing me one of hundreds of thousands of movies right now.

We all know about the “creative destruction” aspect of the market. But what is created and what is destroyed none of us can know in advance. We think we know, but then, it turns out, we don’t know. Ultimately all futurists must defer to the crowdsourced experience of lived markets, tested and pushed and disrupted by real-world entrepreneurs, in order to discover the truth.

And that truth never stops changing. This article is crowing about the survival and profitability of movie theaters. But come next year, it might turn out they start to die. No matter how glorious the seating, how yummy the popcorn, how hip the viewing set is, there might be no way out for the movie theater as an institution. We just can’t know. And it’s not our job to know.

It might also be true that Hollywood itself will be killed off by the rise of independent, original content on subscription sites online, as so many people predict. Hollywood certainly isn’t helping its prospects through its futile war on piracy and its hostile attitude toward its own consumers, all stemming from its monopolistic use of government copyright enforcement. Hollywood originally emerged as an industry fleeing patent enforcement of cameras and projectors in the Northeast. Its best hope for the future is to recapture that spirit of competitive derring-do.

Still, I love to glory in the defiance of expectations. After all, the entire industry survived more than half a century after the government attempted to kill it. In the 1940s, a series of antitrust cases decided by the Supreme Court mandated that the companies that make movies cannot also own the venue in which they are shown. Those decisions smashed the old studio system and marked the end of the old Hollywood. It was decades before we saw recovery.

In a very real way, then, the incredible rise of the local theater represents a magnificent triumph of the power of capitalism over the impositions of the central planners. Despite all odds, despite every intervention and innovation, despite every prediction, they thrive.

So, yes, there is a lesson in this.

The market is not just about the power of enterprise to cause institutions to prevail against all odds. It’s about the implausible and unpredictable shape of a world driven by human volition and forever tested by profit-and-loss signals. No one can know for sure what will and will not thrive, and, hence, no one is really in a position to regulate the process or results. More than that, it’s because of the beautiful uncertainty and the unknowability of emergent patterns that no one will finally rule this world. We must leave that to the revealed shape of human choice, which is forever in process, in saecula saeculorum.

The views expressed on AustrianCenter.com are not necessarily those of the Austrian Economics Center.
hayek_admin2019-01-14T06:14:52+01:00