“The Art of Freedom – A Glimmer of Hope” 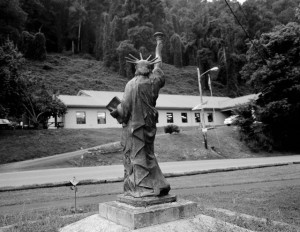 Despite stocks trading at close to all-time highs, it is hard to be an optimist. Federal debt is at record levels and still expanding. The unsustainable growth in entitlements threatens our future and is largely being ignored by our political leaders. An ever-expanding federal government, under the twin umbrellas of providing protection and increasing dependency, is encroaching on our civil liberties.

Our public high schools are failing our students, as they enter an increasingly globally competitive environment. Public policy – the keeping of interest rates at exceptionally low rates – has served to help the wealthy especially, while poverty has increased. The number of people on disability and food stamps are at record levels. Jobs, the poor, and the retired have been sacrificed on an altar of low interest rates and tougher regulation.

Overseas, resets with Russia have not worked, nor have olive branches to the Muslim world. Europe is a mess, placing band-aids on wounds that may require amputation. China’s extraordinary economic growth has reached a level where the natural trend will be more moderate. The Arab spring has devolved into an Islamic autumn, with the Muslim Brotherhood having been the only winner. The threat from Iran has intensified, with the country four years closer to nuclear weapons; and the North Koreans are now demanding preconditions before any bi-lateral talks with the U.S. – no discussions of nuclear weapons.

There are, of course, some positive developments. Our economy continues to grow, albeit slowly. Technology is automating the factory floor, making manufacturing in the U.S. more competitive, but at a cost to unskilled labor. There appears little question that the U.S. should become energy independent, but the timing depends upon freeing up exploration and development for natural gas and oil. Growth will either be hindered or helped, depending on the political environment.

However, it has always been individuals that make a big difference in America. There are those rare souls who, often in unconventional ways, sometimes find answers to problems that appear insoluble. And their very small steps, because of their success, raise the possibility that a way forward will be found. Earl Shorris appears to have been such a man. His book, The Art of Freedom, was published posthumously earlier this year. It tells the remarkable story of this man’s attempt to address extreme poverty in a radically different manner. The book was reviewed by Naomi Schaefer Riley, in last Wednesday’s Wall Street Journal.

Twenty years ago Earl Shorris, a novelist and journalist, visited Bedford Hills Correctional Facility for women, a maximum security prison. He was there to interview and talk with inmates about poverty and the role it played in their lives. He asked one woman, Viniece Walker: “Why do you think people are poor?” She responds: “Because they don’t have the moral life of downtown.” She was referring to plays, concerts, museums and lectures – the humanities. She said they should start with the children. It was this unusual female prisoner and her point about the poor not being exposed to classical works in moral philosophy that caused Earl Shorris, in 1995, to begin a remarkable program to teach the humanities at the college level to people living under economic distress. The classes were called the Clemente Courses, named for the Roberto Clemente Family Guidance Center in lower Manhattan where they were first held.

The poor, Mr. Shorris believed, are enveloped in what he calls a “surround of force” – hunger, isolation, illness, drugs, police, abuse, criminals and more. It is a prison from which they cannot escape and which prevents them from being political in the classical sense.  Earl Shorris realized that “no one could step out of the panicking circumstances of poverty directly into the public world.” These courses would ease that transition. His concept was to recruit a well-qualified faculty that would provide courses in literature, moral philosophy, critical thinking, art, history and logic, with an exclusive emphasis on Western civilization. They would learn politics in the sense Pericles used the word – meaning activity with other people at every level from the family to the neighborhood, to the broader community. More than anything, Mr. Shorris believed the inability to communicate readily and easily with others was forcing the poor to live lives of fearful desperation. He would respect them, calling them either Ms. or Mr. He did not coddle them, but challenged them. He told those who chose to sign up for his courses that they would be tested and made to write papers – that the class would not bend to the lowest common denominator. They would have to keep up.

When Mr. Shorris was recruiting faculty from the University of Chicago, one candidate, Danielle Allen, listened intently and silently to the pitch. When Shorris finished, she sat quietly for a moment and then said, “Oh, I see: it’s about freedom.” She was right. One of the principal purposes of education is to free one’s mind from all the pre-conceptions that are innate to our beings – the “surround of force” that encompasses us all. Classes were taught using the Socratic method, involving inquiry and debate, with the professor leading the discussion. The success of each student depended upon their being able to present their argument in a manner that is logical and does not violate one’s inherent beliefs. Rap talk and hip-hop would not serve.

Mr. Shorris promised nothing; only that one’s mind would be enriched. The courses offered: philosophy, literature, art history, logic, rhetoric and American history. Students had to be poor, between the ages of 18 and 35 and able to read a tabloid newspaper. The first class, in 1995, was composed of thirty students. According to the website for Clemente Courses, more than 10,000 have taken the classes, with half having completed the year-long program. Many of those have completed four-year colleges.

There are millions of people living below the poverty line in America, more than there ever have been. Politicians discuss the problem, but do very little to address its causes. Mr. Obama favors redistribution, as an immediate answer, but in four years, jobs have lagged and poverty has increased. As he was preparing his first course, Viniece Walker warned Mr. Shorris not to forget Plato’s Allegory of the Cave. To Ms. Walker, her life was akin to that Allegory. She had been trapped in poverty and contracted aids. As she saw it, the poor sit, chained to a wall as it were, convinced that the shadows on the wall are reality. The study of the humanities, she believed, would allow the desperately poor to cast off their chains and see who and what casts the shadows.

Reading the book and thinking about the issue, it seemed remarkable about how much more positive was this attempt to free people who have been enslaved by circumstances – inadequate education and a lack of hope – than simply making it easier to collect another week’s food stamps or sign up for disability. Not everyone will succeed in classes like the Clemente Courses. Some don’t have the ability and others are missing the aspiration to succeed. But my guess is that the numbers of those who would succeed greatly exceeds our expectations. It is not so different from the old Chinese proverb that says give a man a fish and he will eat for a day, but teach him to fish and he will eat for a lifetime.

The Western classics have been treated poorly in many of our schools and universities, as being dated and irrelevant in our global, multicultural world. But what has made Socrates, Sophocles, Shakespeare and John Stuart Mills such classics over the centuries is not that they were white men, but that they wrote about and discussed universal truths and ethics. They used politics to engage those with whom they disagreed. Contrast those studies to the teachings of Islamic extremists who see the path to heaven paved with the death and destruction of infidels. Which of the two choices is the more relevant in any world, multicultural or otherwise? The Tsarnaev brothers, as residents of the U.S., were given the opportunity to pursue Western culture. They chose not to do so; rather, they became radicalized. Instead of engaging in debate, they chose to kill. The consequence was the death of four people and the destruction of several families.

By itself, the teaching of the Western classics will not lead people out of poverty, but they will open minds, freeing individuals to pursue ideas and dreams, and doing so in a logical manner. The knowledge they are given will allow them to fully engage with others, in a political sense. As a result, they are far more likely to be productive members of society than dependencies. Mr. Shorris, in The Art of Freedom, shows what is possible for a people that society had largely written off. It is a message we should all take to heart, for there is not one of us who could not benefit from his wisdom.

It is enough to make one reconsider one’s negative concerns.

“The thought of the