The Austrian Economists Who Refuted Marx (and Obama) 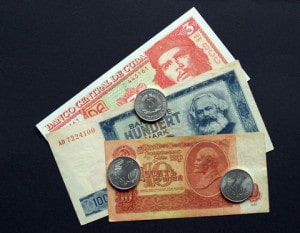 The president of the United States has publicly declared that he knows the minimum wage any worker in the United States should earn as an hourly salary: $10.10. Why not $11.11 or $9.99 has been left a mystery. But what the president is sure of is that businessmen clearly are stonehearted money grabbers exploiting some of their workers by not paying them the real value of what their labor is worth.

Left unspoken in Obama’s assertion of knowing what a minimum “fair” or “just” wage should be in America is the ghost of a thinker long thought to have been relegated to the dustbin of history: Karl Marx (1818-1883).

Marx’s conception of the unjust “wage slavery” that businessmen imposed on their workers became the premise and the rallying cry that resulted in the communist revolutions of the twentieth century, with all their destruction and terror.

But, Marx insisted, the businessman who hired the worker did not pay him a wage equal to the value of the three pairs of shoes the laborer had produced. Simply because the businessman owned the factory and machines as private property with which the worker produced those shoes, and without access to which the worker would be left out in the cold to starve, the employer demanded a portion of the worker’s output.

The employer paid him a wage only equal to, say, two of the pairs of shoes, thus “stealing” a part of the worker’s labor. Hence, in Marx’s mind, the market value of the third pair of shoes that the businessman kept for himself out of the worker’s work was the source of his profit, or the net gain over the costs of hiring the worker.

Here is the origin of the notion of “unearned income,” the idea of income not from working and producing, but from, well, simply owning a private business in which the workers who really did all the work were employed.

The businessman, you see, does nothing. He lives off the labor of others, while sitting up in his office, with his feet on the desk, smoking a cigar (when it was still “politically correct” to do so). It is not surprising that given this reasoning about work, wages and profit that a president of the United States then says to businessmen “You really did not make it.”

Carl Menger and the Personal Value of Things

Karl Marx died in 1883, at the age of sixty-four. A decade before his death, in the early 1870s, his labor theory of value had been overturned by a number of economists. The most important of them was the Austrian economist, Carl Menger (1840-1921), in his 1871 book, “Principles of Economics.”

Menger explained that the value of something was not derived from the quantity of labor that had been devoted to its manufacture. A man might spend hundreds of hours making mud pies on the seashore, but if no one has any use for mud pies, and therefore does not value them enough to pay anything for them, then those mud pies are worthless.

Value like beauty, as the old adage says, is in the eyes of the beholder. It is based on the personal, or “subjective,” use and degree of importance that someone has for a commodity or service to serve some end or purpose that he would like to satisfy.

And furthermore, the value of things decreases as our supply of them increases, because we apply each additional quantity of a good at our disposal to a purpose less important than the purpose for which previously acquired units of that good were used.

As I am adding shirts to my wardrobe, each extra shirt generally serves a use for that type of clothing less important to me than the shirts I had purchased earlier. Economists call this the “diminishing marginal utility of goods.”

Nobody Pays More for Anything Than They Think its Worth

So there is no “objective” minimum value that labor is inherently worth. An employer hires workers because they have value to him in assisting to produce a product that he thinks he can sell to potential buyers. As he hires workers of a particular type and skill, each of these workers is assigned to a task less important than the one the previous worker was hired to do.

As a result, no employer can or does pay more for any worker than he thinks his labor services are worth in contributing value to his production activities. The value of the worker to the employer is an assigned reflection of what that employer thinks the product is worth to the buying public who may purchase what the worker helps to produce.

Suppose that he thinks that some of the people in his work force contribute no more than, say, $6.00 an hour to the making of a product he hopes to sell to consumers. It should not be surprising that when the government tells him that he is legally obligated to pay each one of them a minimum wage no less than $7.40 an hour or $10.10 an hour, he lets go those that he considers now to be more costly to employ than they are worth. In addition, other jobs that he might have made available at that $6.00 an hour will never come into existence.

All that a government-mandated minimum wage succeeds in doing is pricing out of the labor market those workers whose valued contribution in the eyes of the employer in making a product is less than what the government dictates must be paid to them.

But what, exactly, does the employer do? What does he contribute to the production process, over and above the work down by the hired employees? Marx, as we saw, argued that the businessman’s “profit” was the value of that portion of the worker’s output that he appropriated for himself simply because he owned the business in which the worker was employed.

Böhm-Bawerk and the Importance of Savings for Job Creation

Another Austrian economist, Eugen von Böhm-Bawerk (1851-1914), who developed many of the ideas that originated with Carl Menger, gave the answer to Marx. In an important three-volume work on “Capital and Interest” (1914), and in several essays, the most important of which were, “Unresolved Contraction in the Marxian Economic System” (1896) and “Control or Economic Law” (1914) Böhm-Bawerk asked: Where does the business come from in which the worker is employed? And from where comes the funds with which the worker is paid his salary?

How has the factory been built? From where comes the capital – the machinery, tools, equipment – in the factory with which the hired workers do their work to produce the products that eventually are available for consumers to buy?