The Banking Sector, Collateral Velocity, and Credit Creation, Part I: Where are we Headed?

For years I used to teach students about the money multiplier where bank deposits create reserves and the latter a multitude of loans through the fractional reserve system and the money multiplier mechanism. Guess what? That mechanism is no longer the main force of credit creation. It has rather been replaced for some time now by a somewhat opaque process of collateral chains.

A basic characteristic of this modern credit creation mechanism is that assets pledged as collateral in the credit process can be re-hypothecated a few times by the recipient/creditor in a chain of credit extensions. Hence, the overall credit created far surpasses the value of the underlying collateral. Welcome to Financial Crisis 101. When the value of the collateral diminishes (e.g. due to oversupply or due to some other reason) then the loans extended become shaky and the collateral chain feels the tremors. Welcome to the 2016 Financial Markets.

When particular collateral is in high demand and its parameters assign it a high value (by an algorithm), then the owners of the collateral (even if they have actually borrowed a financial instrument such as a futures contract and not actually owned the underlying collateral) can make significant gains if the subsequent derivatives themselves rise in value. Welcome to the Derivatives World whose notional value exceeds $650+ trillion in a global economy of $77 trillion. This was the main culprit of the 2008-’09 financial crisis. 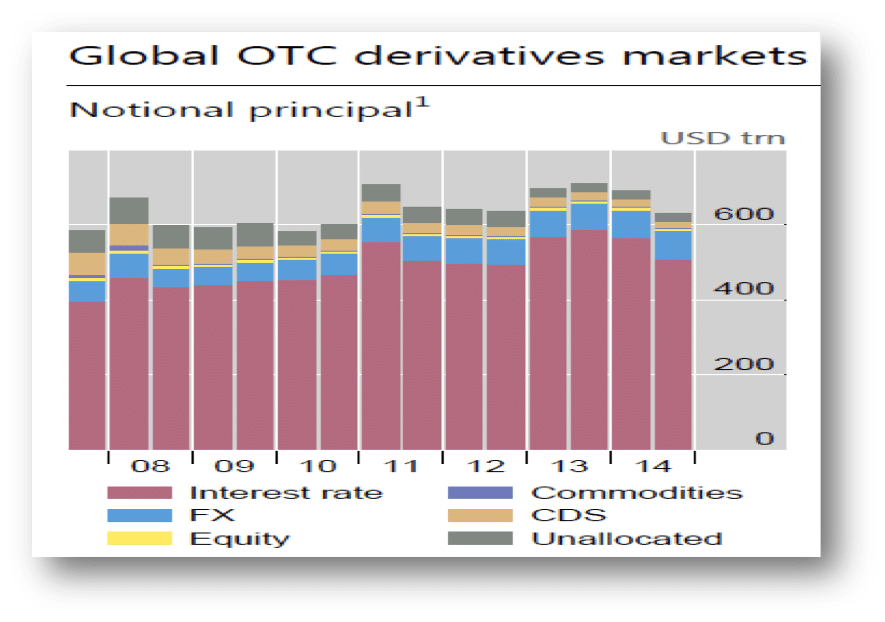 There are at least two fundamental questions inspired by the process above. Namely, What assets are allowed as collateral, and how are they valued once pledged as collateral? If oil drops significantly in price, then oil-related contracts lose ground as collateral assets, and hence the credit creation process suffers. Until other “new” assets, whose algorithm would allow credit to be extended, replace them the earnings picture is squeezed, the pertinent streams of income diminish in value, and the market suffers from volatility and the downward pressures built up.

On top of this, if top collateral is limited, then market dislocations occur. We are suffering from an acute, unstable disequilibrium vs. the stable disequilibrium we are used to living in since the global system lost its anchor in 1971. Case in point: US Treasuries. The latter are not in abundance due to the QE operations of the Fed that has taken them onto its balance sheet. Hence the need for reverse repos, where the Fed lends its balance sheet to the primary dealers in order to increase the circulation and velocity of available collateral.

However, the problem with the collateral chain is not limited to oil contracts and US Treasuries availability. It extends to the lower liquidity (the ability to sell a security rather quickly without major discounts) for other securities too. Moreover, when this private mechanism of credit creation involves over-the-counter (OTC) securities, clearinghouses (who themselves have requested capital infusions of $50 billion from member banks; see http://www.wsj.com/articles/is-50-billion-the-price-of-repo-safety-1449706582), as well as repos (e.g. on leasing oil), leverage facilities, and other mysterious elements, then you have a cocktail that is destined to contaminate not just the balance sheets of banks, but also of companies whose assets are not even in this collateral chain mechanism.

Investors may wonder why banks stocks have suffered that much since the beginning of the year (several well-known names are down 20%). Maybe the previous paragraphs are helpful in understanding why. A collateral shock is in the works that is affecting the velocity of collateral (and not just its value) if trust among institutional players is questioned. In this case the collateral stays dormant and such dormant status results in credit stagnation. The reduction in the velocity of collateral dries up the collateral chain and as the latter dries up, the credit (and not money) multiplier is reduced. Financial stress in the system then rises (see our previous commentary http://blacksummitfg.com/3365), and the ingredients of a shock are amalgamated to a potential market capitulation.

Rising counterparty risks, stranded collateral pools that create credit bottlenecks, and reduced appetite due to a downward trend in business sentiment, exacerbate the shock. I have started becoming a bit concerned with declining collateral velocity that will exacerbate both liquidity issues (and the refinancing of debts denominated in USD abroad and possible at home) as well as dollar shortages around the world. Dollar shortages will amplify capital flows problems around the world, and the combination of the two (collateral and USD shortage) could shake up the markets.

Of course, we cannot exclude the possibility that central banks may pull another card (besides nominal negative interest rates that the central banks of Europe and Japan have initiated) related to the usage of reserves for collateral other than Treasuries in order to increase financial lubrication and collateral velocity. My concern of course is that fiat money, and the undeniably sophisticated mechanisms behind it, may create a new version of Gresham’s Law where bad collateral will drive good collateral out of circulation and as we all look with amazement at the triumph of central bank actions we will whisper to one another “where all the money’s run away?”

The views expressed on AustrianCenter.com are not necessarily those of the Austrian Economics Center.
Federico Fernández2019-01-14T05:57:36+01:00