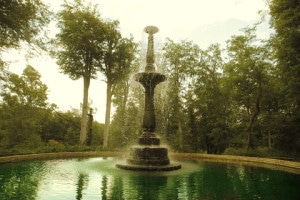 Asheville, North Carolina, is beautiful. Mountains, like the topography in Tolkien, surround an architectural mix for a townscape of 80,000. Design forays from different generations trap the ghosts of literary figures like Tom Wolfe and Carl Sandburg. Yet Asheville does not turn its back upon either its hippies or its hillbillies.

Find a drum circle downtown or people fly-fishing in nearby Blue Ridge streams. There is the cobbled Wall Street thoroughfare and a nice-but-useless roundabout. Investors have renovated early twentieth-century buildings like the Grove Arcade and have welcomed specialty shops that satisfy the tastes of denizens and visitors alike—most of whom can afford driftwood rocking chairs or hand-crafted dolls. Appalachian art infuses earthy mountain-man culture with a touch of fairytale femininity; it resists frills and embraces form in a magical realism that is as much McCarthy as Marquez.

Asheville also proves Marx wrong. Capitalism does not alienate the hand-blown glassmaker from her product; it rather keeps her busy serving a new generation of patrons with refined tastes. These bourgeois bohemians find value in the place where salon sensibilities and folk arts intersect.
And yet Asheville has a Walmart and a Target.

These big boxes are neither central nor obtrusive, but they are there. “People don’t realize how much big-box stores negatively impact the social, economic and environmental fabric of communities,” says Heather Rayburn of the Mountain Voices Alliance, a local anti-development group. Do they? We often hear that big boxes hurt mom and pop shops and ruin communities. This narrative has become a part of contemporary American lore. Is the big box what’s wrong with America?

Another tack against the big box comes from Salon, in “Walmart: An Economic Cancer on Our Cities.” The idea here is to use dubious statistical artifacts to prove nebulous points about how Walmart contributes to problems of sprawl and depressed wages.

The question was simple: What is the production yield for every acre of land? On a farm, the answer might be in pounds of tomatoes. In the city, it’s about tax revenues and jobs.

To explain, Minicozzi offered me his classic urban accounting smackdown, using two competing properties: On the one side is a downtown building his firm rescued—a six-story steel-framed 1923 classic once owned by JCPenney and converted into shops, offices, and condos. On the other side is a Walmart on the edge of town. The old Penney’s building sits on less than a quarter of an acre, while the Walmart and its parking lots occupy thirty-four acres. Adding up the property and sales tax paid on each piece of land, Minicozzi found that the Walmart contributed only $50,800 to the city in retail and property taxes for each acre it used, but the JCPenney building contributed a whopping $330,000 per acre in property tax alone. In other words, the city got more than seven times the return for every acre on downtown investments than it did when it broke new ground out on the city limits.

When Minicozzi looked at job density, the difference was even more vivid: the small businesses that occupied the old Penney’s building employed fourteen people, which doesn’t seem like many until you realize that this is actually seventy-four jobs per acre, compared with the fewer than six jobs per acre created on a sprawling Walmart site. (This is particularly dire given that on top of reducing jobs density in its host cities, Walmart depresses average wages as well.)

For enthusiasts of urban hyperplanning, this may seem like a “smackdown.” But let’s take a closer look.

For example, why would we ever assume tax revenue is valuable in and of itself? If it goes to some crony or bureaucrat, the boondoggle might very well be less valuable than what those resources would have bought in the productive sector.

Second, why is the relevant calculation here for Minicozzi and Montgomery anything “per acre”—much less taxes and jobs per acre? Such an accounting artifact is only important if we’re trying to argue that high density is automatically a good thing and low density is bad. But that’s at least part of what’s at issue here. So this is nothing more than a circular argument packaged as “urban accounting.” I’ll pass over the fact that all of Asheville’s pro-density policies have contributed to making it the third most expensive place to live in North Carolina. So if you’re measuring unaffordability per acre, Asheville’s near the top.

Now, it’s no secret that big boxes are able to negotiate all sorts of tax deals with local municipalities. I have no idea whether this is the case in Asheville, but it might be. In any case, cities make the rules, so we shouldn’t be so quick to blame big boxes for getting favorable tax treatment—even if we’d like to rid the world of cronyism. But let’s assume for the sake of discussion that the town fathers are angels—that is, they aren’t abusing eminent domain or awarding big boxes crony deals.

A statistical artifact like “tax revenue per acre” is pretty disingenuous when one considers a couple of factors: First, the old Penney’s building is a tall building downtown. So it’s not going to take up a lot of acreage (it goes up, not out), and it’s going to collect a lot in property taxes because it’s downtown (where property values are higher, often artificially so due to “smart growth” policies). Of course it’s going to bring in more property taxes per acre than less dense outlying areas where property values are lower due to land values. In almost every natural system in the universe, from galaxies to ecosystems to cities, scaling laws apply. That means dense at the center, less dense at the periphery.

Of course, in this supposed smackdown story, the shopper is left out. It turns out many people like to shop at big boxes. It’s cheap, convenient, and you can find parking. That is, instead of workers per acre, there are more inexpensive products per acre. And while some people are willing to feed the meter and fight the parking problems that “walkable city” policies create, it’s nice to be able quickly to park and shop. Indeed, if we were to shift the relevant urban accounting criteria, we might find Minicozzi’s fetish losing some of its juju. How about other measures: Time spent looking for parking per shopping trip? Money spent on parking per shopping trip? Relative cost per comparable shopping item?

Big-Box Effect
In any case, the wider argument goes that big boxes destroy mom and pop businesses and undermine community. But I would argue precisely the opposite. Big boxes unleash forces that allow more diverse businesses and communities to form and flourish. Call it the “big-box effect.”

The big-box effect is perhaps an offshoot of—or corollary to—what futurist writer Chris Anderson calls the “long tail.” Thanks, then, to Anderson and Pareto. (I’ll proceed to exploit their insights, sprinkling in a little Adam Smith and David Ricardo, too.) The idea is that a lot of interesting and unique goods and services—rarer ones in smaller markets—will be provided along the “tail” of a distribution curve, especially with Internet product aggregation.

First, the big-box effect begins in the big butt of the distribution curve. Products are cheap and abundant here due to economies of scale and reduced stocking and distribution costs. Think of a customer walking into a big box. She can expect to save thanks to the lower prices that flow from these models. When she shops here, she has resources that she would not have had if she’d bought her shaving cream and laundry basket from mom and pop—she has more discretionary income. Often, she takes this extra income to the boutique thoroughfares downtown. Here, a natural clustering of “long-tail” goods and services—prized for their relative uniqueness—has emerged, co-evolving right along with the big box. Big boxes are thus a necessary part of the new life of Main Street boutiques.

What of mom and pop stores? It’s not that they all went out of business—although some probably did. It’s that they changed. Mom and pop specialized. Indeed, through time, mom and pop have continued to specialize. It’s simply a myth that these small businesses have gone away. Instead they have adapted to more discriminating tastes and changed to cater to the preferences of people with more discretionary income. What is remarkable about the big-box effect is not that big-box stores devour everything in their paths, forcing us to buy from a faceless corporation in a monoculture of mediocrity. It is, rather, that they conveniently centralize the mundane and the mass-produced on the outskirts of town.

Now, if you long to buy your shaving cream and laundry baskets from a shop on Main Street, there is little I can say to change your mind about big-box stores. If I’m downtown, I would personally rather find Counter Culture Coffee and gluten-free desserts served by surly college kids with tattoos and piercings. Aesthetic sensibilities notwithstanding, big-box stores are like giant vacuum cleaners of vapid products and services, despite their footprints. And, paradoxically, they leave lots cool stuff in their wakes. If the vapid can be centralized and gotten more cheaply on the edges of American towns, it means more interesting, unique, and artsy stuff can now be acquired on Main Street. If I can