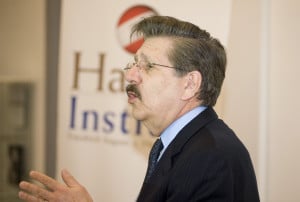 Does Europe need a single currency for success?

* The real market “test” of what type of money (or monies) the citizens of the European community might ﬁnd it most convenient and economically advantageous to use would be for the opening of Europe to the free use of any commodity and currency freely chosen in transactions by market participants.

Allow banks to accept any commodity they found it proﬁtable to accept in the form of a deposit from by their clients, and allow them to issue their own private bank notes as redeemable claims to the commodity left by the client in their account with that bank.

* In other words, why not monetary freedom?

Will “the market” – which means nothing more than the individuals interactng and exchanging on the market – chose such an historical commodity, again, as gold and silver?

* As Hayek also explained, one of the beneﬁts from competition is that it can serve as a discovery procedure, through which we can ﬁnd out something which remains unknown until people demonstrate their preferences and make judgments on the basis of experience and “trail and error.”

* Another advantage of removing money from the monopoly hand of government – or in the European Union’s case its common Central Bank – is it eliminates the ability to avoid the reality of Europe’s ﬁscal and relate problems.

* It would make it clear that it is an illusion to think that the distortions, imbalances, excessive spending, and unsustainable debt from which many European countries are suﬀering can all be “papered over” simply by printing the money to generate the supposed “aggregate demand” to make it all go away.

* This is the reality that European Union and its member countries must ﬁnally face.

* The interventionist-­‐welfare state in any current form cannot be maintained.

Taxes are too high and distortive or incentives;

Regulation is burdensome and anti-competitive

Government entitlement programs must be radically reduced or even eliminated

Labor market must be freed and union power has to be reduced.

* And it must be accepted that it is not “capitalism” or “neo­liberalism” that has failed. But a century, now, of increasingly costly, distortive, and rigidifying interventionist and welfare statist policies.

This is the source of the political corruption, special interest politicking, the wasteful and unsustainable levels of spending and debt accumulation.

* This corrupting and distorting effects from interventionism replacing the market was emphasized by Ludwig on Mises during an earlier economic crisis.

The views expressed on AustrianCenter.com are not necessarily those of the Austrian Economics Center.
hayek_admin2019-01-14T06:50:25+01:00