“The Death of Print?” 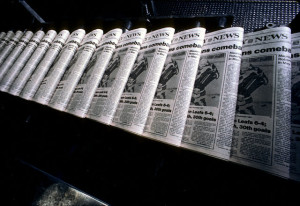 People and institutions mired in the past will never participate in the future.  In Eastman Kodak’s training program (my first job out of college in the mid 1960s), we were shown a video emphasizing what happens to a business when it sups on past glories, and ignores the forces of changing technologies. It was a great message but unfortunately for employees and shareholders, it was ignored by management. They dined and then they died. Newspapers are among the traditional businesses most seriously affected by the forces of creative destruction wrought by the internet. Many of them seem as blind to the forces of change as was Kodak fifty years ago.

E-mailed news alerts, texts from friends and colleagues, social media, and all-news all-the-time radio and cable news networks are available twenty-four hours a day on handhelds and I-Pads. Why buy a newspaper?

Why indeed! Circulations are declining. Rumors of the possible sale of the LA Times and the Chicago Tribune to the Koch brothers have been spreading, much to the consternation of the Left. Last week, sales of two newspapers were announced. One was the sale of the Boston Globe, which along with its website and affiliated properties was sold for $70 million – about 7% of what the New York Times paid for the paper twenty years ago. The paper was sold to John Henry, the principal owner of the Boston Red Sox. Buying a media business to promote one’s interests has been going on for years. In Thursday’s Investor’s Business Daily Monica Showalter noted that Napoleon, in the late 1790s when still an “obscure general fighting Austrian and Prussian troops on the Italian border,” bought two newspapers to promote his and his troops successes. It worked. In 1804 he had himself proclaimed Emperor. Mr. Henry may be able to transition to a digital format, but if all he does is drive attendance at Fenway Park, his bargain-basement purchase may pay off.

The more interesting transaction, however, in terms of what it may mean to the future of news dissemination, was that of the Washington Post to Amazon founder, Jeff Bezos. Mr. Bezos used about one percent of his estimated $25 billion net worth to buy the Washington Post from the Graham family. According to an analysis in last week’s Barron’s the newspaper has been losing money for at least four years. It is expected that they will lose about $100 million this year. The newspaper represents about 5% of the value of the Washington Post Company, according to Barron’s. The parent company is 23% owned by Berkshire Hathaway, with the Graham family owning 18 percent.

What was Jeff Bezos’ motivation in purchasing the Washington Post? Was it a bet on nostalgia – a rich man’s way of embedding in amber a form of communication that has existed for four hundred years, but is at risk of becoming irrelevant? Does Mr. Bezos have political ambitions, so sees the Post as a platform for pushing an agenda? It seems unlikely that either is the reason. It is more likely that he understands the importance of a knowledgeable/educated consumer and that newspapers no longer serve that function, as they are no longer read by a majority of the people.

Why did Jeff Bezos buy the paper personally, rather than Amazon? Again, no one knows except for Mr. Bezos. But, should Amazon have bought the paper directly, continued losses would have almost certainly distracted shareholders and analysts. There are those who, wishfully, believe that Mr. Bezos wants to ensure a favorable environment for Post’s columnists, reporters and journalists to continue as they have. Katherine Weymouth, the Post’s publisher, seems to think so.

In an interview in last weekend’s Financial Times, she was quoted: “It’s much like my great-grandfather who bought the Post in 1933 with his own personal money and for many years lost dollars out of his own pocket. We may be going back to an era where there will be people with deep pockets and deep resources who will be committed to real journalism.” Perhaps? Forty years on, Watergate is still fresh in the minds of many on the Left. Those were the Post’s glory days. Mr. Bezos does have “deep” pockets, but I doubt he sees himself as a savior of a business that is failing. There are others who are trying to determine his political preferences. Again, it is my sense that Mr. Bezos did not purchase the paper in order to promote an agenda, personal, political or otherwise. I suspect he had something more radical and far-reaching in mind.

Jeff Bezos has witnessed the decline of print media and the rise in internet-related traffic. In the past ten years, Amazon sales have increased twelve-fold, while The Washington Post has seen a 40% decline in daily circulation. In terms of e-commerce, there is probably no person with greater expertise than Mr. Bezos. With an horizon as distant as his, he may be able to find a solution to the problem of good print journalists addressing shrinking audiences in a world infected with Attention Deficit Disorder. In Amazon, he has a business that reaches millions of global consumers, with a data base of analytics on each one of them that grows every time they click on a product. Amazon does not listen to our phone calls but in analyzing buying habits across thousands of SKUs, it very likely has a greater sense of our individual interests than does the NSA. In the most interesting article I have read on this subject, Gordon Crovitz wrote in Monday’s Wall Street Journal that Jeff Bezos might be able to “accelerate the personalization of the news.” He wrote: “News about my town is fine, but news affecting my neighborhood is better and news affecting my block is best.” If Mr. Bezos is able to deliver news, personalized to an individual’s geography and preferences, he will prove a winner.

Begun in 1995, as a website selling books, Amazon today sells $60 billion worth of merchandise annually, from books and videos to snow blowers and bicycle wheels. According to businessinsider.com, at its peak in 2012, it was selling products at the rate of 306 every second. The company sells them to 200 million consumers, 10 million of whom are Amazon Prime subscribers. While Prime customers get free shipping, the real value to Amazon is that those customers buy much more stuff through the Amazon website. And, every time a product is purchased, it enhances the value of the company’s analytics. It allows them to tailor offerings specific to the interests of their customers. In fact, what it does is build dependency.

The Washington Post began life in 1877. In 1933 it was bought by Eugene Meyer, who in 1947 formed the Washington Post Company. It went public in 1971 and two years later, Warren Buffett invested in the company. Mr. Buffett’s investment of about $20 million is worth around $1.2 billion today, indicative of the value of compounding returns over long periods of time. The company obviously benefitted in diversifying away from dependence on the newspaper, into education, cable and network television. Ross Douthat wrote in his weekly column in Sunday’s New York Times that it is possible to date when the opportunity to become a new-media paper of record for political coverage came and went: “…it happened in 2006 when John Harris and Jim VandeHei left the Post to found Politico.” Today, as Mr. Douthat notes, “Politico rather than the Post dominates the D.C. conversation.” Mr. Bezos’ challenge will be to make the Post competitive again.

As to the question, is print dead? Again, any answer is purely a guess, but I would think not. But it will never be the same. By the time a newspaper is on the stand or in your mailbox, much of the news is stale, having already been covered by all-news-all-the-time radio and TV and, of course, the ubiquitous internet. Print news, in the future, will not be so concerned with breaking news, as with analysis – more in-depth reports on cause and effect. (In the interest of full disclosure, I am one of the worst people to try to answer the question. I typically buy five newspapers a day. The owner of the deli in Connecticut where I buy my papers considers me a relic (though a welcome one) from another age. I also subscribe to the electronic editions of the New York Times, the Financial Times and the Wall Street Journal. Wikipedia lists the 100 newspapers with the largest circulation. Combined, they have a daily circulation of about 30 million – not a lot in a nation of 313 million. Daily digital readership at the New York Times at 1.1 million is approaching its print readership of 1.9 million. In terms of U.S. dailies, circulation declined by one percent last year but thanks to price increases, circulation revenues rose five percent.

Creative destruction is a natural phenomenon in economic progress, and newspapers are a current and very visible victim. Besides being cheaper and faster, digital media, through social media, can direct news with more precision toward a targeted audience – an appeal to advertisers and a boon to consumers. Democracy depends on a free and diverse Press that offers myriad opinions. There will be no shortage of news and news sources. The risk, as I see it, is one in which individuals will tend to watch, listen and read news that supports their preconceived political inclinations. They may be less likely to consider contrary opinions. Th