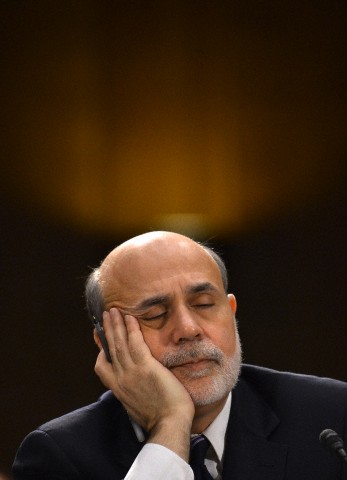 In almost all aspects of life it is easier to give than to take away. It makes no difference whether one is talking about a dog and a bone, a child and a toy, or a speculator and cheap money. While I make no pretensions of being an economist, it seems obvious after five years that the concept of keeping interest rates at zero and the continuation of expanding the Fed’s balance sheet at the rate of $1.020 trillion a year has done as much (or as little) as it can for the economy. Asset prices, which benefit the wealthy and hurt the poor, have done well.

Meanwhile, economic growth remains sluggish. The reason has to do with a failure on the part of the President and Congress to inspire confidence in employers and businesses, because of tax and regulatory policies that are designed to impede, not grow, the economy. The losers have been the people, especially those at the lower end of the income scale.

According to the most recent issue of Grant’s Interest Rate Observer, the Fed’s balance sheet stood at $3.6 trillion on September 11 versus $2.8 trillion a year earlier – an increase of 28.5%. Unwinding the balance sheet will inevitably make dollars scarcer, thereby raising interest rates. But the bigger the portfolio gets the more difficult will be the task of unwinding it. At some point, the cure will be more painful than the disease. Detoxification is never pleasant.

Since 1977 the Federal Reserve has had a dual mandate – stable prices and maximum employment. The former, at least according to conventional reports, has remained sanguine. The latter has not been achieved. It is true that stated unemployment numbers have declined from 10% to 7.3%, but the workforce is about 3 million people smaller than it was when the recession began. If we were to look at today’s employment numbers on an “apples to apples” basis, the unemployment rate, most observers agree, would be over 11%. It has been the excuse of too-high unemployment that has caused the Federal Reserve to maintain exceptionally low interest rates. Even so, we know those rates have done little to help average families, while they have benefitted the wealthy. Had the President and Fed officials claimed to have represented the one percent, we would be giving them high-fives for mission accomplished.

Mr. Bernanke has tried to exit gracefully from his commitment to bond purchases. But his assurance that “tapering” would be gradual has not soothed timorous markets. It may be premature to say, but it is very possible that the 30-year bull market in Treasuries may have given up the ghost about three weeks before Mr. Bernanke announced his intention that he might possibly scale back his purchases. The trough in the 10-Year occurred on May 2, with a yield of 1.61%. Last week, after Mr. Bernanke announced his surprise decision, the yield fell 35 basis points, but by Friday had made up most of Thursday’s loss. It closed at 2.73%.  Time will tell whether the May lows will hold. But it could be buyers have become concerned, regardless of Mr. Bernanke’s decision, that 2.7% is inadequate compensation for the risk of holding a U.S. Dollar, which has fallen by a third over the past decade, for ten more years. If nothing else, Mr. Bernanke’s retreat from expectations is further proof that the future can never be clear, no matter the best intentions of government policy makers.

While it seems to me that the Fed, in giving us an extended summer, the worry is that a focus on the Fed ignores the far bigger problem. The real fault lies with an Administration and an obstreperous Congress that have refused to work together to address the fiscal world of make believe they now occupy. Both parties are guilty. We have a President who would rather make teleprompted speeches to scripted and adoring fans, than to negotiate with bloviating Democratic Senators and Republican House Members, who seem intent on defunding ObamaCare regardless of the consequences. The result is a stalemate with the economy continuing to founder. Creativity has been limited to the words each uses to describe the other party. Mr. Obama will negotiate with Mr. Putin on the latter’s terms, but he won’t negotiate with a Republican-led House. Mr. President, you have a country to run and an economy that is chugging along like my great-Aunt’s Model-A roadster. An underperforming economy hurts the poor and the middle class more than anyone else. When you and the Congress refuse to act like grown-ups, responsibility falls to the Fed. They, as a consequence, become the only responsible game in this kindergarten we call Washington.

For most of the 1980s, the 1990s and into the early 2000s, low and middle-income consumers benefitted by a strong Dollar, declining oil prices, steady gold prices and a low price of goods produced in low-wage places like China, Indonesia and Vietnam. That pleasant backdrop for American consumers began to change, as labor costs began to rise in emerging nations, the Dollar fell and oil prices rose. In the wake of 9/11, the Fed lowered interest rates and Congress encouraged speculative buying of houses with borrowed money. Mr. Obama’s policies, like his predecessor George Bush, had the effect of lowering the value of the Dollar and increasing asset prices, including gold. The ones that have been most squeezed are those on the lower end of the income scale. Because of Mr. Obama’s failed policies, income inequality has grown, despite his promises to help the poor and the disadvantaged.

Seth Lipsky, founder and editor of the New York Sun had an op-ed in last Thursday’s New York Post that should be read by anyone interested in the debilitating effects of a weak currency. What Mr. Lipsky did was to measure the increased price of gasoline, groceries and houses, not only in nominal terms, but adjusted to the price of gold. For example, he wrote that since Bernanke became Fed Chairman, the price of gasoline has risen 54%, while the value of that gallon of gas has plunged nearly 33% to 1/372nd of an ounce of gold. The monthly grocery bill for a family of four has jumped 25% to $1036, while the value of those groceries fell 45% to 0.79 ounces of gold. And the average new home rose 4.2%, but the value fell 54% to 257 ounces of gold. Cheapening our currency can temporarily cover up for the deficits that, as Mr. Lipsky put it, “Congress lacks the backbone to control.”

It is easy to get exasperated with most of our politicians in Washington: a photo in Saturday’s New York Times of Eric Kantor, a supercilious grin on his face, as he struts through the halls of Congress; another photo shows a s***-eating grin on Senator Schumer’s face as he looks adoringly at Caroline Kennedy in Senate hearings on her confirmation as America’s Ambassador to Japan. She is a woman whose most important qualification for this sensitive post is being the daughter of a President who became idolized in death; In a TV interview, we see a dyspeptic Harry Reid waspishly chastising the Republican House. But nothing rankles more than another sermonizing, teleprompted speech from the President on rebellious Republicans who, like the pot calling the kettle black, he claims are putting politics above the needs of the people. Meantime, he irresponsibly sends the country careening toward a dependency-state and likely financial Armageddon, with little concern as to the harm he is causing.

The President says he speaks on behalf of the nation’s poor and middle class. Yet his policies have served to damage them. Employment is lower by about three million. Oil prices are up by 108% and the Dollar has declined seven percent. At the same time, gold has risen 48%, common stocks are up over 100% and High-yield bonds have fared even better, as their yields have declined 1000 basis points. The President has urged and Congress has passed myriad regulatory proposals (Dodd-Frank and the Affordable Care Act being the two most prominent) that have increased the cost of doing business, while reducing business confidence. There have been thirteen tax increases in 2013 alone, according to the Heritage Foundation, six of which are to pay for ObamaCare. A year ago, US News & World Report listed twenty-one tax increases since Mr. Obama took office. The tax code is now so complex that only the most sophisticated accountants and lawyers can make their way through its maze. Half the nation’s workers pay no Federal income tax. Therefore the complexities, which primarily benefit the rich and the largest corporations, do the most damage to the nation’s middle class.

In a speech before the U.S. Manufacturing Summit, Richard Fisher, president of the Dallas Federal Reserve, argued that the U.S manufactures have the potential “…far and away, to be the most efficient operators in the world.” He added: “We must insist that Congress practice a little Schumpeterianism of its own: throwing out old, counterproductive fiscal and regulatory policies and ushering in new ones that unleash job creators from the starting gates.” In the calcified environment that is Washington, with a President who would rather golf and make speeches and Republicans who would rather defund ObamaCare than let it collapse of its own weight, Mr. Bernanke may have had no other choice than to blink.