The First Amendment, Congress and the American People 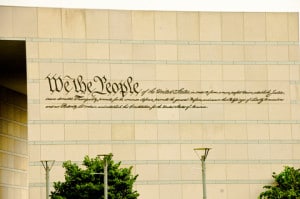 The Constitution’s 227th birthday last week went almost unnoticed, except in Washington where Senator Harry Reid continued his assault on the First Amendment – which he would change so as to harness his political opponents, but which permits him to say whatever he wishes from one of the most powerful pulpits in the land.

Also last week, a poll of high school students and teachers regarding the Constitution’s First Amendment was released. It was conducted by the Florida-based John S. and James L. Knight Foundation. Its findings were startling: Thirty-eight percent of the high school teachers believe the First Amendment provides too much freedom. Students appeared to better understand than their teachers the importance of the First Amendment in their everyday lives. Nevertheless, a still surprising 24% agreed that it is too liberal. This misunderstanding of the Bill of Rights is not limited to teachers and their students. Seventy-six percent of Americans, according to a Harris Poll released earlier this year, said they thought the First Amendment guaranteed freedom from religion, as well as the freedom to pray as one chooses.

I was astonished by the findings, but perhaps I should not have been. Political correctness has affected the way American history is taught, and the Left dominates the teaching staffs in our schools and universities.. It is axiomatic that the larger the role government plays in our lives, the fewer our rights The Left feeds on those who are dependent on government. The numbers favor them. The bottom 40% of all federal taxpayers pay a negative 9.1% of all federal taxes, while the top 40% pay 106.1%. An immersion in government has effectively divided us into two classes – those who pay the bills and those who do not.

The Constitution’s First Amendment provides basic liberties, and it prohibits Congress from enacting any law that may abridge those rights. Like most of our early laws, it is short (45 words) and easy to understand. It prohibits Congress from passing any law respecting the establishment of religion or prohibiting the practice of one; it prohibits Congress from passing any law that restricts freedom of speech, the press, or the right of people to peaceably assemble. It protects the right to petition the government for a redress of grievances. Such rights are elemental to a free society. Yet, its values are underappreciated by legions of Americans, It is at risk by those in Congress, either ignorantly or knowingly, who would change it for their own political purpose.

There are, of course, certain activities not restricted or protected by the First Amendment. It does not protect the rights of individuals in respect to the companies or businesses where they are employed. It is not aimed at parents for restraining their children. It does not protect individuals from slandering their enemies, uttering obscenities, lying under oath, or for yelling “Fire!” in a public place. It does not protect IRS employees like Lois Lerner who subvert an impartial branch of the federal government into an agency that attacks or hinders political opponents.

For those like James Madison and Alexander Hamilton, it was government they feared, not people or businesses. The First Amendment was designed to protect the people from an omniscient and omnipresent government. It allows preachers like the Reverend Jeremiah Wright to speak blasphemously about his country; it permits newspapers, and TV and radio news shows to offer their opinions, no matter how ridiculous; and it allows individuals, unions, organizations and businesses to support those political policies they prefer.

The most recent attack on the First Amendment came from a group of Senators that wanted Congress and the states to determine how money was raised and spent by candidates and those who influence elections. They were led by Senators Harry Reid (D-NV) and Tom Udall (D-NM). In total 45 Senators sided with Mr. Reid’s group. Specifically, they wanted an Amendment to overturn Citizens United and McCutcheon v FEC. The consequence would have been a transfer of power from the people to Congress. Fortunately the Bill died before reaching the Senate floor.

I agree that there is far too much money sloshing around in the political arena. But that has always been the case, as influence peddlers work their magic on K Street. Ironically, money has become far more ubiquitous and rhetoric far more extreme since passage of the Bipartisan Campaign Finance Reform Act of 2003, better known as McCain-Feingold. That ill-conceived Act encouraged the growth of Political Action Committees (PACs), which can accept unlimited funds with no disclosure of contributors. Today, PACs with their partisan extremism, dominate today’s political campaigns. Last April, the Washington Post reported that 94% of 2012’s TV political ad spending was by PACs. While Senator Reid lambasts the Koch brothers, we hear little about the Senate Majority PAC, run by people affiliated with Senator Reid, which has raised more money in the current election cycle – $33 million – than any other PAC associated with either party. In Wisconsin, Milwaukee County District Attorney John Chisholm has intimidated conservatives by having their homes ransacked and their private affairs dragged through courts; so that advocacy groups are reluctant to speak out. Government intimidation was not what the founders had in mind in 1791 when Virginia became the final state to ratify the Bill of Rights.

The First Amendment is clear that political speech cannot be restricted. But there is nothing in the Constitution that says contributions must be anonymous. “Sunlight is the best disinfectant,” wrote Justice Louis Brandeis, referring to the benefits of openness and transparency. Why should that not apply to all political gifts, including those to PACs? Trying to control the flow of money to a campaign, besides being a violation of our rights, would be an impossible, Herculean task. Smart lawyers, with few scruples, would find ways to circumvent any such law.

We are fortunate to live in this nation. All one has to do is look around the world at the fighting in the Middle East, the threat to freedom in Ukraine, the intolerance of Chinese officials toward residents of Hong Kong, the Ebola outbreak amid the extreme poverty in Africa, the political corruption in Argentina and Venezuela to know how lucky we are. But freedom is not free. It demands an educated public. It is fragile and can easily become corroded. A thorough understanding of our Constitution and the Bill of Rights by everyone is imperative if we are going to survive as a free people. The polls suggest that is not the case. We are at risk of losing the battle.

The views expressed on AustrianCenter.com are not necessarily those of the Austrian Economics Center.
hayek_admin2019-01-14T06:13:32+01:00