The Flattening of the Yield Curve and the Migration of Risks: The Path of Hedging Holdings and a Contrarian View on Market Trajectory

Historically, the inversion of the yield curve is a good predictor of recessions. On top of this when spreads of high yield bonds reach the current level of 850 bps (i.e. 8.5% above Treasuries) the probability to experience a recession within 8-12 months is between 60-70 percent. Therefore, there are some signs that we may be headed into a recession and any market capitulation (as we defined it in a recent commentaryhttp://blacksummitfg.com/3365 ) that is accompanied by deteriorating business and consumer sentiment may indeed lead to a downturn in the business cycle.

It also seems that the troubles of the high yield market are migrating to other fixed income instruments as well as to the equity markets. The shakeup of banking shares (in the U.S. but especially in the E.U.) along with the warnings of Sir John Vickers (who led the Independent Commission on Banking in the U.K.) that the Bank of England’s equity cushions are insufficient (http://www.ft.com/intl/cms/s/0/4da8fd78-d338-11e5-8887-98e7feb46f27.html#axzz40B4PYNnK ), are reminiscent of bear markets if not of a brewing crisis.

The graph below portrays the yield difference between the ten and the two-Year Treasuries. 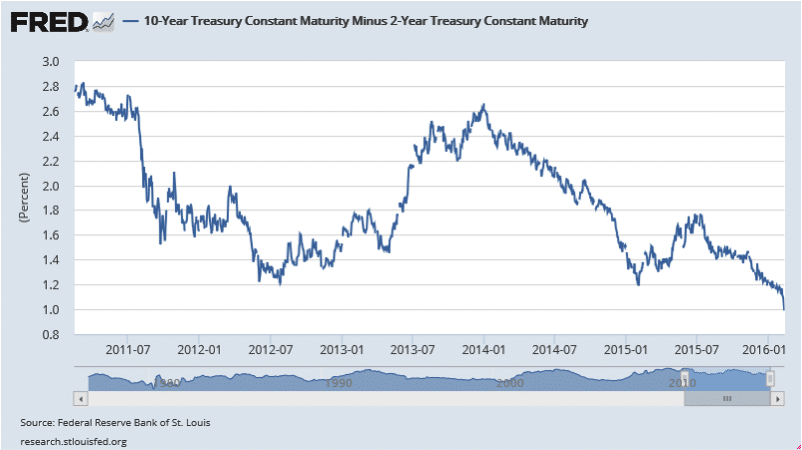 It is interesting to note that in the first half of 2015 the steepening difference indicated improving economic sentiment. However, since then the downward trend (currently the difference stands at 0.99%) is indicative of deteriorating market conditions and the hysteresis in capital losses as risks migrate from high yield to other markets. As the difference shrinks, flight to safety ensues and portfolios could be hedged by loading up more on Treasuries (leveraged positions on Treasuries could possibly serve as an even better hedge). We could also say that risk parity considerations direct managers’ attention to such tactical hedging, so that the asset allocation would reflect current macroeconomic trends.

When the difference between the two yields dips below zero, then the yield curve is inverted (meaning that short term Treasury Bills yield more than longer term Treasury Notes) and the economy is in or is headed for recession pretty soon. Market observers perceive that the shrinking difference is a clear sign of an impending recession. We choose to differ (at least for now). Our position is that the flattening of the curve is not related to changes in the fundamental conditions but rather reflects a reaction due to overestimated fears. Those reactions are exaggerated by negative interest rates pushed by central banks in Europe and Japan and most certainly are accommodating over-indebted governments around the world.

Our position is due to the fact that all the movement in the difference between the two yields is due to changes in the yield of the ten-year Treasury. The two-year Treasury yield has barely moved due to the ZIRP policy of the Fed. Therefore, the distortions introduced by QE and the ZIRP policy have reduced the predictive power of the flattening of the yield curve. We anticipate that swings between losses and gains will continue in the near term with mini rallies trying to erase part of the year’s loses. However, we would be especially careful as those loses are eliminated and the yield curve starts steepening a bit. The current impotence of its predictive power might be deceitful and the rally may end up looking like the Arab Spring.

If fundamentals still seem to be solid, then that might be the time (following a big drop) to grasp some undervalued but solid companies, even some triple CCC high yield bonds (whose yield is far superior to those of the double Bs).

The views expressed on AustrianCenter.com are not necessarily those of the Austrian Economics Center.
Federico Fernández2019-01-14T05:57:32+01:00