The Geopolitics of Market Volatility: Spillover Effects and Macro Fundamentals

The act of counterbalancing and possibly containing China has multiple faces. Shinzo Abe, the Prime Minister of Japan met with Vladimir Putin of Russia last weekend in an effort to sway some support regarding the dispute between China and Japan over the Senkaku a.k.a. Diaoyu Islands. However, Japan seems to have fallen out of the strategic interests of Russia. Russia – given its sanctions and isolation from the West – is on a trajectory of closer relations with China and has been paying little attention to other Asian powers. At the same time Russia and Japan face their own disputes over what Russia calls the Kuriles Islands and Japan the Northern Territories. Japan is afraid that its two powerful neighbors may soon be uniting against her, especially under times of financial stress that both China and Russia are facing. An alliance between China and Russia would undermine regional stability while it could also threaten trade relations.

At the same time the agreement that the EU reached with Turkey regarding the containment of migrants flows to the EU via Greece, is threaten given the power struggle between Prime Minister Davutoglu and President Erdogan. The PM resigned last week over disagreements with the President regarding aspects of that agreement and the obligation of Turkey to revise its anti-terror legislation and ensure civil liberties. A fallout in the agreement would undermine Angela Merkel’s credibility and stand within Germany, at a time when the EU has underestimated the consequences of millions of migrants reaching its territories. In the midst of the EU’s political, economic, and financial dysfunctionalities this was the last thing that the Eurocrats desired.

In the meantime Euroskepticism is on the rise, from Poland where the ruling Law and Justice Party is on a campaign to control the media and oppose Brussels, to Austria and Hungary, at a time when the debate to stay in the EU is becoming a hot topic in the United Kingdom. If the latter chooses to drop its membership from the EU, then we may be facing – hopefully temporarily – some significant market, trade, and currency turmoil.

And while all these things are taking place, Indonesia elected as president a person so unconventional who threatens to outright kill gangsters and outlaws. Probably it is indicative of an anti-establishment climate whose crown jewel is well-reflected in the US primaries and in Europe in referendums where the people reject treaties and want something different.

At the same time in the Middle East turmoil keeps brewing from the budget deficits and the depletion of Saudi Arabia’s reserve fund, to Yemen, Syria and the civil wars in Libya. Needless to say that we would not be surprised if what is thought as Brazilian political stability once president Rousseff is impeached could turn into a boomerang and destabilize the largest economy in S. America.

The goal of the paragraphs above was to show that there are two forces in the global geopolitical scenery. The first one has to deal with the undercurrents within and among countries and regional blocks, and the second one with a rise in popular support for unconventional leadership. The lack of market volatility as depicted below is remarkable while all these things are taking place.

We are of the opinion that market volatility will pick up in the foreseeable future and thus a hedge in the portfolios through the VIX index might be a wise move that could mitigate downside risks. We offer below two figures which we believe foretell a story that goes like this: the declining money velocity – as a result of unconventional monetary policies – has the effect of infusing anesthesia into the markets, and instituting a de facto helicopter money policy that eventually will backfire either through market turmoil and volatility or though unexpected inflation. 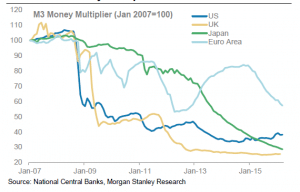 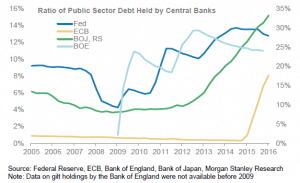 On a global scale the manufacturing index (as depicted by the PMIs shown below) remains weak and we believe that the system needs a shock (political or economic) in order to avoid significant turmoil. 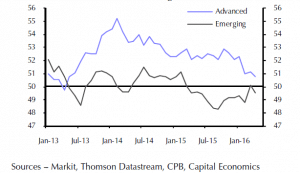 We want to remain optimistic that the rising trade volumes can be sustained and we still believe that China can avoid a hard landing, however caution is recommended in the form of anchoring portfolios with hard assets (and not just paper assets) while reducing risks and deploying strategies that can enhance yields.

The views expressed on AustrianCenter.com are not necessarily those of the Austrian Economics Center.
hayek_admin2019-01-14T05:56:48+01:00