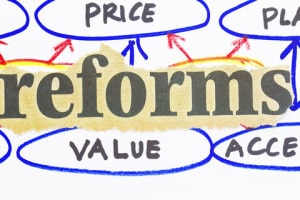 It takes two and half hours by train to get from the Spanish capital Madrid to Barcelona, almost 400 miles away. Since the 1980s, Spain has been among the pioneers of the development of high-speed railways, with a network that is the longest in Europe, and second only to China’s, spanning over 1,900 miles. The construction of the Spanish AVE (high-speed) network has continued even after the country’s debt crisis. By 2020, practically all provincial capitals are expected to be connected to Madrid in less than three hours.

Yet, the shiny railway network and the massive infrastructure spending did not make the burst of the real-estate bubble, the sovereign debt crisis, and Spain’s sharp economic downturn any less painful, nor have they accelerated the recovery. In spite of large government spending, with a budget deficit exceeding six percent this year, youth unemployment in Spain is stubbornly above 53 percent and per capita incomes are at lower levels than 10 years ago.

Spain hardly seems as a model worth emulating. It is therefore odd that The Economist, normally demure about such matters, recommends that Germany — which may now be slipping into a recession — follow the Spanish example by boosting its infrastructure spending in order to increase both short term aggregate demand and lay foundations for long term growth.

One reason for skepticism about salutary macroeconomic effects of increased infrastructure spending is that most estimates of fiscal multipliers are extremely modest, especially during peacetime. When Harvard University economist Robert J. Barro attempted to estimate the multiplier associated with peacetime government purchases, he “got a number insignificantly different from zero.”

If Germany — and the rest of the Eurozone — do indeed require a demand-side stimulus, it should come in the form of a monetary expansion. Eurozone-wide, inflation has been consistently below the target of 2 percent since the beginning of 2013. Maybe now is the time for Germans to rethink their opposition to a more accommodative monetary policy in the Eurozone — or one which would, at a minimum, try to hit the inflation target during bad economic times. However, the last thing that the European Union as a whole needs is to see Germany, the most important force fostering fiscal responsibility on the continent, abandon the example it is setting for other European countries in favor of an elusive quest for a demand-side stimulus.

If there are shovel-ready infrastructure projects with a social rate of return that justifies public investment, Germans should go ahead and fund them. But rushing into such decisions or overlooking the underlying costs and benefits is hardly a prescription for sound policy. It is also worth keeping in mind that even the most careful cost-benefit analyses tend to set the benchmark for public investment too low — typically, such studies underestimate the social cost of spending projects by ignoring the distortions associated with present or future taxation required to fund these projects.

However that may be, to claim, as The Economist does, that creaking bridges and overflowing kindergartens are major constraints on German economic growth strains credulity. According to World Economic Forum’s Global Competitiveness Report, Germany ranks seventh in the world in terms of the quality of its infrastructure, and is outperformed in Europe only by Netherlands and Switzerland.

Inadequate infrastructure should thus be the least of Germans’ worries. Take labor markets, for example. In spite of the reforms undertaken in the 2000s, which strengthened the incentives to work and increased labor-hour flexibility, the hiring and firing regulations are still too stiff and the country relies overwhelming on centralized collective bargaining. To remain a manufacturing powerhouse of Europe — and to attract new, innovative industries — Germany would arguably benefit from an overhaul of its income tax system, which imposes disproportionate marginal rates on workers.

The German economy is also held back by poor energy policy decisions made in the recent past. Compared to other countries, Germany has reduced its reliance on nuclear power and increased the deployment of renewables. One of the unintended consequences has been the rise of energy prices, which increased by 60 percent over the past five years. In per-megawatt terms, German industry pays roughly twice as much for electricity as American companies. The situation is not helped by the widespread opposition to hydraulic fracking, driven by a ‘not-in-my-backyard’ mentality.

Regardless of what one thinks is the proportion of demand- and supply-side factors behind Germany’s current economic malaise, more government spending is the wrong answer. It is an answer based on bad economics, and it would encourage reckless fiscal behavior that may cost Germany and Europe dearly in the future.

The views expressed on AustrianCenter.com are not necessarily those of the Austrian Economics Center.
hayek_admin2019-01-14T06:09:57+01:00