The Infeasibility of Price Targeting for the ECB

The ECB has been heavily criticized for its lack of interventionism until not so long ago. Its more recent intrusiveness, analogously, has been welcomed by a large number of commentators as a necessary action that will solve, or at least attenuate, the deflationary problems faced by some countries. However, the brief history of the common currency, as well as its intrinsic features, suggest taking a much more careful approach.

The primary objective of the ECB is to maintain price stability by keeping the inflation rate, as measured by the HICP, “below but close to 2%  over the medium term”. This approach is not quite in line with the Austrian monetary theory that condemns central banks’ intervention and, in the European case, the reality is such that even mainstream economics clearly demonstrates the limits of this strategy. The HICP of the Euro Area is built by averaging the consumer price indexes of every member state, weighted by their GDPs. However, as shown in the graph which includes inflation rates for 2014, price indexes differ substantially from country to country. In fact, the Eurozone average has always been far from the highest and lowest inflation levels of its member states, whose business cycles do not coincide. If we were to assume the validity of monetary-policy rules, it would follow that no economic model can effectively suggest an interest rate target that is not excessively high or excessively low for some of the countries. This is shown by economist Paul De Grauwe in his comprehensive book “Economics of Monetary Union” where he calculates the desired interest rate that the central bank would need to target if it were to follow the Taylor rule. He obtains very diverse results across countries, with maximum differences of even 6 percentage points in some years. The biggest concern is the occurrence of a policy of low interest rates that results in an excess of liquidity where not needed, contributing to the formation of bubbles. As this must always be the case across countries with different business cycles and inflation rates, the impossibility to maintain price stability without harming some countries is a clear consequence. 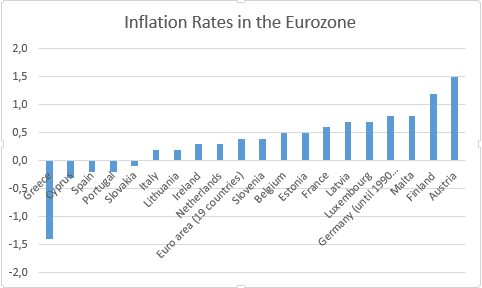 Some evidences from the past point out the destructiveness that price targeting in the Eurozone may have. The case of Spain is highly representative of the effects that can derive from focusing on the average of HICP. According to professor Zingales, as mentioned in the book “Europa o no”, the country suffered a huge recession due to the burst of the housing bubble which was alimented by a policy of excessively low interest rates. Conversely, that interest rate level was fine for the Eurozone as a whole and even too high for other countries, if one were to calculate the optimal level based on whichever price targeting model. In addition, as mentioned by Ángel Martín Oro, the credit expansion was larger in Spain than in other European countries; the argument against price targeting is here reinforced since it may occur that a more than proportional amount of newly issued credit ends up in the wrong country, contributing to the formation of bubbles there while not addressing the issues it wishes to address. What is important to realize is that this situation was not the cause of the central banker’s misbehavior or mistakes, but a direct implication of the inappropriateness of the rules that the ECB has to follow. In other words, the problem is structural and ignoring it would inevitably lead to a similar outcome in the future.

The Euro is not bad per se; it is just a tool that could potentially allow for stability and eliminate competitive devaluations that threaten allocative efficiency in the Euro Area. It could deprive states of an instrument that subtly taxes savers through inflation to finance overly expensive and often unnecessary and inefficient public expenditure. It could further destroy the incentive of politicians to avoid performing a serious budget review and necessary structural reforms instead of running excessive deficit spending. In other terms, the Euro restricts the leeway of politicians, hindering their populist conduct and forcing them to make choices to meet financial obligations instead of postponing as far as possible important budget decisions at a cost for society. Unfortunately these are only potential advantages and, despite some of them have partly become reality, the full benefits of adopting a common currency have not materialized yet and will not materialize if the mandate of the central banker requires intervention. A central bank that operates under these terms is a leftover of monetary nationalism of the pre-Euro era, with the further drawbacks that a monetary policy based on European aggregates entails, as previously discussed.

The conclusion is straightforward: the Euro can work only for economies that are competitive without any monetary stimulus. Member states that are not able or willing to comply with this reality should consider exiting instead of calling for policies that would harm the others.

The views expressed on AustrianCenter.com are not necessarily those of the Austrian Economics Center.
hayek_admin2019-01-14T05:59:35+01:00