The Intolerance of Brandeis 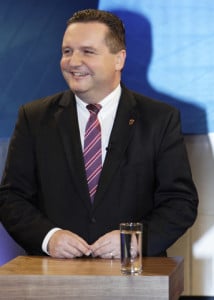 Intolerance of tolerance is certainly no virtue. But bowing to pressure from the intolerant is cowardly. That is what Brandeis President Frederick Lawrence displayed when he revoked the honorary degree the university had planned to bestow on Ayaan Hirsi Ali at this spring’s commencement.

We have reached a sad state when an American, Jewish-sponsored college founded in 1948, when the Holocaust still cast its genocidal shadow over a world reeling from five years of world war, denied a promised honorary degree to a black woman who dared take on one on the cruelest elements of religious bigotry the world has ever known – radical, theocratic Islamism, with its inhumane treatment of women through genital mutilation, forced marriages and “honor killings.” Multiculturalism should not mean accepting the unacceptable.

Ms. Ali is now an American citizen, married to historian Niall Ferguson, yet she still lives under persistent threats of death. She left her native Somalia at the age of eight and was forced to leave her adopted country of the Netherlands when she was told, despite her prominence as a human rights activist and the fact she was a center-right member of Parliament, adequate security could no longer be provided. Death threats intensified following the release of the film Submission, for which she wrote the screenplay, and after the shooting death of the film’s producer Theo van Gogh by a member of Hofstad, an Islamic extremist group. Pinned to Mr. van Gogh’s chest by the knife that had been stuck in his dead body was a note promising similar retribution to Ms. Ali.

In contrast, the only pressure Brandeis president, Frederick Lawrence experienced was from student and faculty activists, motivated by a perverted sense of multiculturalism and political correctness, and from CAIR, the Council of American-Islamic Relations.

What made Mr. Lawrence’s actions so insufferable is that he masked his intolerance in a cloak of patronizing tolerance – that, while Ms. Ali had the right to express her anti-Islamist sentiments, having her appear at a Brandeis commencement would be inconsistent with Brandeis’s core values. Those values, like so many of those on the illiberal Left, apparently, exclude diversity when it differs from their cynical concepts of multicultural righteousness.

CAIR, the group that led the charge to exclude Ayaan Hirsi Ali from receiving an honorary degree, claims to be the largest Muslim civil rights and advocacy organization. In reality, it is a Hamas-linked group that is a business-suited front for the Muslim Brotherhood and other Islamic-extremist organizations. Its charter, for example, calls for the destruction of Israel. CAIR led the charge that forced ABC to scrub a new series about a teenage girl forced to live with an extended family in Saudi Arabia, “Alice in Arabia.” They expressed fears that it could engage in “stereotyping” that might lead to the bullying of Muslim students. The show’s creator disagreed, saying that it was a step toward greater tolerance for the understanding and empathy of women in all cultures. Last week, two University of Michigan campuses scrubbed the screening of “Honor Diaries,” a 2013 documentary that explores violence against women in honor-bound societies. It is a movie that exposes the terrible abuses women and girls suffer in the name of family honor. Never mind that it goes out of its way to convey respect for moderate Islam, or that it won the Interfaith Award for Best Documentary at the Chicago International Film Festival last October, CAIR and other Islamist groups objected and the University caved. Where are the feminists who fought the good fight for women’s rights? Or don’t Muslim women count as women?

CAIR refers to itself as a “Muslim NAACP,” “but,” as Roger Simon of POLITICO.com wrote recently, “to compare CAIR to the NAACP is like comparing Josef Mengele to Ben Carson.” One would have more respect for CAIR if they used their influence within the Muslim community to condemn the small number of Islamic extremists who give the Muslim religion a bad name. Instead, they foster Islamophobia, by castigating those who challenge Islam when it is used as a vehicle for extremism – anyone who condemns killings or mutilations in the name of Allah is portrayed as an Islamophobe. It was his false sense of the exigencies of multiculturalism that caused Mr. Obama to refer to the 2009 Fort Hood shootings as “work place violence,” despite Major Nidal Hasan shouting “Allahu Akhbar,” as he murdered 13 fellow soldiers.

It could well be, as some claim, that Ayaan Hirsi Ali has allowed the tragic events of her youth and young adulthood to color her view unfairly toward the Muslim religion, that “violence is inherent in Islam,” as she has said. But, keep in mind, she was made to undergo genital mutilation as a child, then forced unwillingly, at a young age, into marriage with a cousin she disliked. But, the question hangs: why have not peace-loving Muslims stepped forward to condemn those who would kill and maim in the name of Allah? And why are our universities, supposedly bastions of free speech, been so willing to ban speech when it is in opposition to their narrow, multicultural views, or is it because they fear retaliation?

This brings us back to our main point – the inexplicable action taken by Brandeis. Keep in mind, this is the university that conferred honorary degrees on playwright Tony Kushner who called the creation of Israel “a mistake,” and on Archbishop Desmond Tutu who compared Israel to Nazi Germany. The decision to pull Ms. Ali’s honorary degree was despicable for an institution that prides itself as being liberal in the old fashioned definition of the word – being open to all views. It was cowardly in that the press release intimated that the decision was mutual, that it was made in consultation with Ayaan Hirsi Ali. In a clarifying statement the next day, Ms. Ali said when first approached by Brandeis: “I accepted partly because of the institution’s distinguished history…I assumed that Brandeis wanted to honor me for my work as a defender of the rights of women against abuses that are often religious in origin.” In the same statement, after she had been told her name had been withdrawn, she noted, “I was completely shocked when President Frederick Lawrence called me – just a few hours before issuing a public statement – to say such a decision had been made…I was not surprised when my usual critics, notably CAIR, protested against my being honored in this way. What did surprise me was the behavior of Brandeis.”

The foregoing of an honorary degree will have no lasting impact on Ayaan Hirsi Ali who will continue to fight for women’s rights against the abusive treatment brought about by the intolerance of religious fanatics. But it does mark another notch in the closing of an American university’s mind, where political correctness subsumes academic and individual freedom, where free expression and diversity have been replaced with silence and conformity. It is us – students and citizens – who are the losers, not Ms. Ali.

The views expressed on AustrianCenter.com are not necessarily those of the Austrian Economics Center.
hayek_admin2014-04-15T10:06:14+02:00