The Lesson of Ferguson 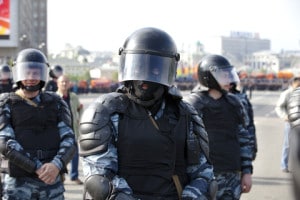 The right to protest may not be specifically found in the Constitution or the Bill of Rights; though the rights to freely assemble, petition and speak are integral to the Bill of Rights. However, peaceful protests are embedded in our culture and history and manifested by those like Henry David Thoreau and Martin Luther King. Both men, while demonstrating for causes in which they strongly believed, were vigorous in their emphasis on, respectively, civil disobedience and peaceful marches.

On the other hand, violent protests that are destructive to private property undermine the rule of law, without which no democratic nation can survive. Keep in mind, the American Revolution, which was a violent protest, had as its aim the overthrow of a tyrannical government. Is that the goal of looters in Ferguson following the tragic death of Michael Brown? Is that the purpose of those who would encourage them, like Reverend Al Sharpton who advocates a “no snitch” policy and who has been known to conjure racial incidences for purposes of self promotion? Is that what some members of the press want, those who are more intent in advocating than reporting? Was that the goal of Missouri Governor Jay Nixon who essentially convicted police officer Darren Wilson, in spite of an absence of evidence?

Every day, on average, between 40 and 50 people are murdered in the U.S., about half of whom are African-American, despite the fact they make up only 13% of the population. Ninety percent of them are killed by fellow African-Americans. In fact, murder is the leading cause of death for young Black men between the ages of 19 and 34. While excess force by police, including militarization, is something that all citizens should guard against, Black-on-Black killings have proliferated; yet little attention is paid. The question for which we should be seeking answers is: why have we allowed this state of affairs to grow and to fester?

President Obama’s “My Brother’s Keeper” is a laudable initiative aimed at addressing this problem. He stated its goal last February when he announced the program: “We must find what works and build on that answer.” But we know the answer – a decent job. And a good job requires a decent education, with an emphasis on moral judgment. Education, a moral sense, pride in one’s community and a job will do more to eliminate petty crimes, and the violence that often ensues, than all government entitlement programs combined. Since the majority of jobs in the U.S. are created by small and mid-size businesses, government should play a positive role in making the environment more conducive for entrepreneurs and businesses, through simplifying the tax code, and by easing or eliminating cumbersome and unnecessary regulations. Local governments, community leaders and civic organizations can combine to promote better schools, universal values and a sense of pride in one’s self, family, community and country.

It has become popular to deride the concept of the nuclear family – a mother, father and children. Such families are seen as old-fashioned and failing to fit the mores of the more sophisticated and cosmopolitan world in which we imagine ourselves to be – a place in which we view ourselves tolerant of and sensitive to all those who are different, whether in race, culture, sex or creed. Most of that tolerance and sensitivity has made us a better people; but when we become tolerant of the intolerant and insensitive to the will of the majority we let down the moral shroud that envelops us. We have become tolerant of gays and transgenders (which is good), but intolerant of traditional families. We are tolerant of Muslim extremists (which is bad), and deride as out of touch those who choose to live by Christian values. We are empathetic to the Michael Browns, but less so to the Darren Wilsons.

Common values allow us to live civilly among others. A good education permits us to live more enriched lives, including the prospect of a good job. People are more likely to be law abiding when they have a job and assets to protect. Unemployment in Ferguson is 13%, about double the national average, while household net worth is $10,000, a third less than the national average. What are needed are policies that encourage job creation, which starts with education and a strong moral sense.

Among intellectuals, the media and many politicians, moral relativism has replaced moral absolutism. These people have no problem providing financial aid to those in need (especially through government transfer payments), yet, swaddled in hypocrisy, they lock themselves within gated communities. The poor are no more than an abstraction to these coastal, supercilious liberals who attend benefits open to Hollywood’s and Hampton’s elite, while posting “selfies” on Facebook to show that they care. Poverty is known only vicariously. They claim sensitivity to racism, but ignore the role a degraded moral code has had on behavior.

In 1950 only 9% of Black families with children were headed by a single parent. Today, over 70% of Black children are born to unwed mothers. In addressing the root cause of the tragedy that unfolded in Ferguson, we should begin by reevaluating our attitudes toward traditional values. Black unemployment is double that of whites. Among the young, the situation is worse. Only 28% of Blacks between the ages of 16 and 19 are employed, down almost two percentage points from five years ago. These are national averages. The situation in Ferguson is more dire. Time spent constructively leads to less destructive behavior.

Ferguson, Missouri is part of St. Louis County. It was founded in 1855 when the Wabash Railroad went through, on its way from Chicago to St. Louis about six miles to the south. Its motto: “Proud Past; Promising Future.” The suburb was situated, according to one description at the time, “in one of the most beautiful districts in St. Louis County.” Ferguson was home to hall-of-famer and St. Louis Cardinal slugger Enos Slaughter. General James (Jimmy) Doolittle, Medal of Honor winner and the man who commanded the first raid on Tokyo in April 1942 lived for a while in Ferguson. Like many Midwestern cities, Ferguson has lost about 40% of its population over the past forty years. About 67% of the population today is African-American versus just over 50% fifteen years ago. Twenty-two percent of the population lives below the poverty line. Importantly, as has been widely reported, only 6% of the city’s police force is African-American. And, significantly, only 12% of eligible voters voted in the most recent elections. Consequently, political power rests with the White minority who control five of the City Council’s six seats.

A Grand Jury has been convened, the racial composition of which roughly matches that of St. Louis County, though not that of Ferguson. Nevertheless, to infer it is racist if it does not vote to indict, as CBS News has done, is to pour gasoline on a fire that has already burned out of control. The Grand Jury will either exonerate or indict Officer Darren Wilson. A young Black man was killed by a White police officer, in a tragic event. Witnesses with ulterior motives have produced conflicting reports. Prejudgments, insinuations and character assassinations have swept through Ferguson like the mighty Mississippi. They should play no role. It is not helpful to the legal process when politicians jump aboard a case like this, not for clarification, but for opportunism. It sounds like a story from the Old Testament when demands are made that St. Louis County Prosecuting Attorney Robert McCullough be recused because his father was shot and killed by an African-American fifty years ago. Histrionics should have no role. We live under the rule of law. It must be allowed to play out.

We will never put to rest all our prejudices. We will never eradicate all poverty and ignorance. We cannot halt all killings. But we can make them less likely, with a cultural shift. We can resurrect a moral sense. We can improve our educational standards. We can focus on finding jobs. And we can implement the “broken windows” method of fighting petty crimes.

In the end, it is the emptiness of lives lived unfulfilled that leaves those who live them mired in despair. We need to provide hope, but in substantive ways that allows those without to become independent and self-reliant, considerate of others and responsible for all they do. We must
do our utmost to substitute positive values for the destruction of violence. That should be the lesson of Ferguson.

The views expressed on AustrianCenter.com are not necessarily those of the Austrian Economics Center.
hayek_admin2019-01-14T06:14:40+01:00