The Menace and Immorality of the Welfare State 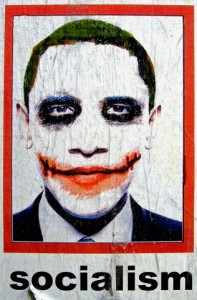 “Tea Party” poster protesting President Obama as a Socialist, with a caricature of Obama in white face and painted as “The Joker.” 2010. — Image by © Corbis

In the United States policies are being promulgated by those with political power in Washington, D. C. that involve a massive and dangerous growth in the size and scope of government. At the core of the Obama administration’s push for implementing a comprehensive national health care system and related programs is a radical ideological belief in political paternalism and the welfare state.

In the face of the euphoria of those demanding such a huge expansion of “Big Brother” over even more of our lives, it is worthwhile reminding ourselves of the premises behind and the realities of welfare statism.

First and foremost, the guiding idea behind political paternalism is that the individual cannot …

The views expressed on AustrianCenter.com are not necessarily those of the Austrian Economics Center.
hayek_admin2019-01-14T06:41:01+01:00