The Mexican Libertad: The Currency Solution? 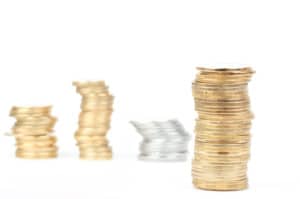 But of course, gold and silver coinage has traditionally had a bit of a problem when either inflation or deflation is the norm in the world: a denominated face value. A century ago, a one-ounce US Liberty gold coin had a face value of twenty dollars. Today, its scrap value alone is nearly 65 times that amount. So, as the value of precious metals changes from day to day, the face value of the coin becomes meaningless.

However, the Libertad, unlike most gold and silver coinage in the world, does not show a face value; it shows only a weight. It can therefore change in value daily, assuming that the Mexican government were to also create a standard by which the Libertad prices could be calculated each day as the prices of gold and silver fluctuate.

In 2003, the Mexican government became worried that their central bank, the Banco de México, held reserves of some 50 billion US dollars. President Fox stated, “We really don’t know what to do with them, they are so large.” Today, the reserves are more than twice as high. And it would be safe to say that, much like the rest of the world, Mexico worries about the level of US debt and the likelihood of a dollar crash that could wipe out the value of Mexico’s dollar holdings.

So, Mexico eventually began to increase the issuance of silver coins. The coins are put into circulation as legal tender with a floating value that is quoted daily by the Banco de México. The coins can additionally be exchanged for paper pesos at certain Mexican banks.

Although the decision to issue the Libertad in this fashion is a simple one, in terms of importance, it has the potential to be monumental. In a world in which all countries presently operate on a fiat money system—a system that in the not-too-distant future may well collapse—the Libertad could be a true monetary solution.

The End of Fiat Currency

In the past one hundred years, more than twenty fiat currencies have collapsed due to hyperinflation. In 1993 in Yugoslavia, when the dinar collapsed, the German deutschemark became the unofficial currency by default, as it was the nearest reliable currency.

In 2008 in Zimbabwe, when the Zim dollar collapsed, the US dollar became the unofficial currency, as it was the most readily available alternate currency.

There can be no question that, the very next day, commerce would need to continue. People would need to buy groceries and gasoline. As they have done historically, people would turn to whatever alternate form of currency they most trust.

With the sudden loss of most or all fiat currencies, the logical choice would be gold and silver—the currencies that mankind has returned to time and time again for 5,000 years.

But even though that may be the logical solution, there will be that problem of denomination that we spoke of earlier. Unless a system exists in each country to provide an official value to a specific weight of precious metal on a daily basis, there can be no consistent agreement between parties as to the worth of a given coin.

And here we have the true beauty of the Mexican Libertad. Its design specifically overcomes this problem. And as it can already legally be converted back and forth to paper currency at a Mexican bank, it has the ability to completely eliminate any problem that will be caused if and when the Mexican peso crashes. As long as there are sufficient coins in circulation, the shock from the fiat currency collapse is circumvented, and the next day, it’s business as usual. (And this would be true for larger purchases if, in addition to the silver Libertad, a gold Libertad were in circulation.)

Not surprisingly, at present, no government in the world is hinting publicly that its currency may fail. Hopefully, though, they are aware that collapse may be on the way in the not-too-distant future. If not, as the time gets closer, more and more political leaders will accept the possibility. With the Libertad already successfully in place in Mexico, it would not be surprising if, one by one, other countries pick up the idea. If so, the first to do so will be those countries that are smaller and less powerful—the ones that suffer the most when larger countries fail.

If this were to happen—if other countries were to create their own version of the Libertad, in the same standard weights and with no face value—the next development would be the most significant one, as regards international commerce.

The Libertad as an International Currency

A shopkeeper in, say, Guatemala, who receives a Mexican Libertad as payment may at first hesitate to accept it but, after a bit of thought, will recognise that, if his own country has instituted a similar coinage system, the Libertad is essentially interchangeable with his own government’s coinage. The only difference is the name of the country on the coin. And in shaky monetary times, he is even likely to prefer a Mexican silver coin to his own country’s paper currency.

If, say, a dozen countries were to implement similar coinage systems prior to the actual occurrence of worldwide fiat currency collapse, the concept of gold and silver as reliable international currency would already have established itself in the minds of merchants and consumers alike. In essence, it would be the obvious solution, even to those leaders who very well may not have been astute enough to figure it out on their own.

It would not take long for the average till to contain a mix of coins, all from different countries. (Although this concept may, today, seem unlikely to be acceptable, I believe it would catch on fairly quickly. When I was a boy, the local currency was pegged to the US dollar, which meant that every till had local and US bills mixed together interchangeably. No one gave it a second thought.)

Certainly, we shall soon experience a series of shocks, if fiat currencies bite the dust. This, ultimately, will be a very good thing, as the fiat currency concept is a very bad idea. And, certainly, other currencies of one type or another will surface quickly, out of sheer necessity. Some countries may try to float new fiat currencies; some may attempt electronic currency. But each of these choices would be a return to the same old problem.

A true solution to both fiat currencies and the shock of their demise exists right now, if the leaders of the world’s nations are able to recognise it.

The views expressed on AustrianCenter.com are not necessarily those of the Austrian Economics Center.
hayek_admin2019-01-14T06:13:12+01:00