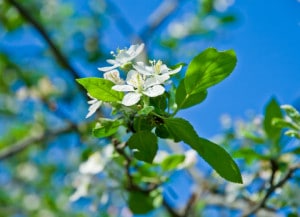 Besides tax day, April is noted for showers, which according to the rhyme should bring May flowers. We certainly have had the rain and, if my garden is at all predictive, it looks like May will bring an abundance of blossoms – though nearer the end of the month than the start. The month was also, as I wrote in an earlier piece, the occasion of my 50th wedding anniversary. At the request of our grandchildren, we renewed our wedding vows. This time, though, I felt confident that they will really take; there should be no need to redo them in another fifty years!

The month began with Mr. Obama announcing that all debate about the Affordable Care Act can stop now that 8.0 million people have signed up. The first reaction of the Administration to the enrollment numbers, after high-fives all around, was to announce the resignation of HHS Secretary Katherine Sebelius. After an abysmal start on October 1st, 8.0 million is a credible number. But details have not been made available. How many have paid? How many were young and healthy? How many had been uninsured? How many are Medicaid signups? How many actually lost their insurance because of ObamaCare? What has been the cost – in technology and advertising? And what about the Little Sisters of the Poor? With dozens of lawsuits outstanding, no one can predict what will happen to the Affordable Care Act. The whole episode shows the divisiveness of one Party trying to unilaterally drive legislation past another.

The month was also a reminder of the instability of the world in which we live. A massive 8.2 earthquake hit offshore Chile on April 1. Earthquakes are measured on the Richter Scale, an exponential scale; so that every increase in a whole number equates to ten times the magnitude – a 7.0 earthquake is ten times that of a 6.0 and 100 times that of a 5.0. For comparison purposes, the earthquake that hit San Francisco in 1989 and which collapsed the Bay Bridge was 6.9 on the Richter Scale. This one was about 50 times larger and should serve as a reminder that man remains subservient to nature. At the end of the month, on the 27th, a tornado ripped through parts of Mississippi and Arkansas killing 35. Tornados are ranked according to the Enhanced Fujitsu Scale, from EF0, with wind gusts up to 85MPH to EF5, with wind gusts up to 200MPH. This one was ranked an EF3. The Philippines were ablaze on the 6th of the month when 1000 homes were destroyed by fire in the slums of the southern city of Davao. Like the great Chicago fire of 1871 (which was allegedly started when Mrs. O’Leary’s cow knocked over a lantern), this fire was started by human error – a candle.

False leads are commonplace to all searches. Malaysian Flight 370 is no exception. We know no more as to its whereabouts today than we did when the month began. Killing and murder seemed to dominate the news. South Sudan, independent since 2011, continues to experience tragedy of epic proportions. The Economist noted that the scale of the massacre of civilians in South Sudan’s oil hub of Bentiu on April 15-16 “plumbed to a new depth of hell.” The crime was committed by the rebel White Army. But there are no “good” guys in South Sudan, at least none of the political variety, and there is very little hope for an end to the horror. The ferry disaster in South Korea was tragic, with 188 dead and 114 still missing, most of whom were high school children. While 68% of the passengers died, only 24% of the crew perished. The captain made an early and quick exit off the doomed ship and is now being held on charges – as he should be. On Sunday, Chung Hong-won, South Korea’s Prime Minister (and symbolic leader) resigned, reflecting government’s slow response. However, since he blamed the tragedy on “deep-rooted evils” in society (whatever those might be) perhaps the government is better with him gone.

The situation in Ukraine worsened. Russian troops amassed along the country’s eastern border and pro-Russian militants occupied municipal buildings in Ukraine’s eastern section. Gennady Kernes, the mayor of Ukraine’s second largest city, Kharkiv, was shot and badly wounded last weekend. It continues to look like Putin will have his way. Sanctions have done nothing, thus far, to deter a Russia apparently intent on recreating some of what it lost in 1991. In the distant past, sanctions generally meant restricting goods and services into a country, the idea being that the people would rise up and persuade leaders to mend their ways. Now we attach the assets of leaders who have grown rich off the backs of their people. It might work, but power in office provides the opportunity to replenish emptying coffers. Also, assets can be moved to friendlier places, as I am sure has been the case with Putin and his oligharchial buddies.

North Korea persists in flexing its military muscles in war games along the border with South Korea. The United States (properly) refused a visa to Iran’s selection as their permanent ambassador to the U.N., Hamid Abutalebi. Mr. Abutalebi had been one of the Iranian soldiers who bore responsibility for taking American hostages in 1979. The appointment was a deliberate slap at the United States; so kudos to Mr. Obama for refusing to play along.

Violence in the United States included another shooting in Fort Hood, with three dead and twelve wounded. Unlike the Islamic terrorist shootings in December 2009, this time it may really have been ‘work-place’ violence. In Milford, Connecticut, a 16-year old high school student, Maren Sanchez, was stabbed to death for refusing an invitation to the prom. In Kansas City, during the month that observes Holocaust Remembrance Day, white supremacist F. Glenn Miller shot and killed three people, two outside the Jewish Community Center and another outside Village Shalom, a senior living facility, shouting ‘Heil Hitler,’ as he pulled the trigger. It was a despicable act and the shooter should be removed to some venue that would provide real justice, like Israel.

Cliven Bundy received a lot of press when he was told that the government land on which he and his family had had grazing rights for over 100 years was going to be set aside for the desert tortoise, a species environmentalists had placed on the “threatened” list in 1990. Mr. Bundy refused to remove his cattle; so armed agents did it for him. A stand off ensued; the government eventually relented and his cattle went back to grazing. The situation is now in the courts. In the meantime, Bundy lost most of his support when he ranted about African-Americans in an obscene soliloquy, which was as repulsive as Jeremiah Wright’s had been about Whites in 2008. Bundy’s remarks were as idiotic as had been Joe Biden’s and Harry Reid’s when they referred to Mr. Obama in 2008 in terms that even I would not care to repeat.

Speaking of racist comments, Adam Silver acted quickly and decisively in fining Donald Sterling of the L.A. Clippers $2.5 million and banning him for life from the NBA for racist comments he made to his girl friend/mistress over the weekend. If justice is truly served, Sterling will be forced to sell the team. On the other hand, outrage was muted when bumbling John Kerry suggested that Israel risks becoming an Apartheid state, if the peace process fails. In my opinion, the anti Israel words we keep hearing reflect a resurgence of anti-Semitism, especially in parts of Europe.

Death appeared, as its wont, never fortuitously and sometimes unexpected. I lost a friend when John Gould of Schafer-Cullen died unexpectedly and far too early on April 11th. Mickey Rooney, a major child star of the late 1930s and early 1940s, died on April 6 at the age of 93. As Andy Hardy, he was an all-American, mischievous lad who made millions for MGM. After the War, as Mickey Rooney, he became a boozer and gambler. He was married four times, once to Ava Gardner. In 1979, he made his Broadway debut, earning a Tony in “Sugar Babies.” While he continued to make cameo appearances in films, he never recovered the money he had lost and died almost penniless. The world lost one of the great writers of our time when Gabriel Garcia Marquez died at the age of 87. Though it was written 47 years ago, “100 Years of Solitude” is an unforgettable story of the Buendia family in the mythical town of Macondo. Other books that Marquez wrote that I have on my shelves include “Love in the Time of Cholera” and “The General in his Labyrinth.” While Marquez’s politics were Leftist, his writing appealed to all.

With midter
m elections beginning to loom – now only six months away – the Parties have gone into attack mode. The Republicans have their eye on ObamaCare, though the number of sign-ups may have blunted their offensive. With a weak economy and a foreign policy in disarray, Democrats resorted to playing the old “pay gap” card. This time, however, the attack imploded, as it was shown that the same pay gap exists in the White House and that female staff members on the Hill are less well paid by Democrats than by Republicans. What we can be assured of is that nastiness will guarantee that issues will not be discussed and that millions of dollars will be spent in vindictive ads. I, for one, am going on strike and refusing to give money to any national candidate, no matter his or her Party. I know we need them, but I’m fed up.

In the world of finance, the Federal Reserve continues to taper. Bond purchases have been reduced from $85 billion per month to $55 billion. At their month-end meeting it is expected that the Fed will reduce purchases by another $10 billion. Thus far, the effect has been surprisingly (to me) muted, with the yield on both the 10-Year and 30-Year continuing to decline – albeit modestly – during the month. With preliminary First Quarter GDP being reported at 0.1% on the last day of the month, it is possible that the Fed may rethink their decision. Keep in mind, however, preliminary reports are subject to revision. Nevertheless, last quarter represented the lowest rate of growth since recovery commenced in the third quarter of 2009. In the nineteen quarters since recovery began, there has