The Month That Was January 2014 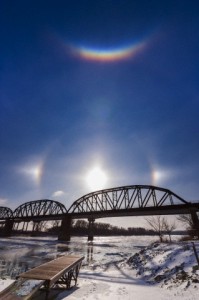 “January is here, with eyes that glow,

Striding a shadowy steed of snow.”

(Given our age difference – grandson George turned nine on January 1st and I turned 73 on the 31st – he and I represent the alpha and omega of the year’s first month.)

The first of January can be seen as the day to celebrate the American Bar Association’s (ABA) “Full Employment Act.” Fifty-five tax breaks expired at the end of December, but lawyer-lobbyists will of course be out in force getting them re-instated. New taxes went into effect on January 1, including a flat 2% tax on all health insurers, which is expected to raise $8 billion to help offset costs of ObamaCare. There was a $2.00 per policy fee that will fund a new federal bureaucracy called the Patient Centered Outcomes Research Institute and a 3.5% user fee to sell health plans on the HealthCare.gov website. These taxes and fees will be passed on in the form of higher premiums. The 40% tax on the so-called Cadillac plan (higher cost health plans) will not go into effect until January 1, 2018, when the current occupant of the White House is elsewhere.

An estimated 40,000 new laws, both state and federal, were added to the roles on the first day of the year, providing additional income to needy lawyers. The new laws include such critical rules as making bathrooms in California schools available based on “gender identity,” the banning of sharkskin soup in Delaware, and making it illicit, in many states, to stock incandescent light bulbs. And people wonder why morals are dissipating and the economy has been so anemic! Does anyone think that the President and his wife would find it okay if the Sidwell Friends School opened the girls’ bathrooms to fifteen year-old boys who had decided that for the moment they were gender confused? Are there not bigger problems facing America than 60-watt light bulbs?

Besides the weather, equity markets provided a chilly start to the year, probably not a surprise after an extraordinarily positive 2013. Nevertheless, superstitious investors can worry about the old disproved adage: As goes January, so goes the year. In another old wife’s tale, the blow-out win by the Seahawks last evening portends a dreary market for 2014. As investors went from “risk-on” to “risk-off” (a phrase I have grown to despise), Treasuries surged in price, with the yield on the Ten-year falling well below 3% – from 3.03% to 2.67%. With Treasuries higher, the Dollar gained 1.3%. Gold rallied and silver slipped. A January freeze, combined with a lack of fracking on federal lands, sent natural gas prices higher, but oil prices were essentially flat. A favorable Administration analysis of the environmental consequences of the Keystone XL pipeline should provide the President the cover he needs to approve its construction. Will common sense trump ideology? We shall see.

Governor Christie, the Republican that had polled best against Hillary Clinton, appears to be in more hot water than previously expected over “Bridgegate.” His earlier assertions that he knew nothing about the lanes closures in September are being questioned. Time will tell who is telling the truth, but Democrats can walk away now with a sense of mission accomplished. Mr. Christie’s national poll numbers have already fallen about 20%. Nevertheless, a scandal over lane closures cannot begin to compete with the Administration’s scandals: an IRS that is being compromised for political purposes; Benghazi, which will not go away despite best efforts by the Obama and Clinton crowds, and the ATF’s “fast and furious” program of sending guns to Mexican drug cartel leaders…and the lies that accompanied all three. Reflecting their biases, mainstream media has spilt more ink on “Bridgegate” than on the other three combined.

During the month, Mrs. Clinton took the opportunity to say she “regrets” what happened in Benghazi. I suspect she regrets even more the elaborate cover-up concocted, most likely by the White House. I also suspect she regrets ever having said: “What difference, at this time, does it make?” Four men were killed, including a United States ambassador. The truth as to what happened before, during and after the attack does matter. This issue will persist, as it should, whether or not Mrs. Clinton seeks the Democratic nomination for President.

Many on both the Left and the Right are annoyed at the prying tactics of the NSA. A few of them believe that Edward Snowden should be welcomed home as a hero. In my opinion, these people naively choose to ignore the fact that terrorists are still trying to kill us. Incredibly, two Norwegian politicians nominated Mr. Snowden this month for the Nobel Peace Prize. That says a lot about Norwegian politicians and the head-in-the-sand world in which we live. (Last September, European Union lawmakers nominated Edward Snowden for the Sakharov Prize for freedom of thought!) Perhaps I am getting old, but it doesn’t seem long ago when traitors were hung, not celebrated.

The Ukraine is reaching the breaking point, with President Yanukovych calling in sick on January 30th. The concept that peaceful demonstrations – an idea once promulgated by the Orange Revolution – can overthrow tyrannical governments without violence is now dead. In Egypt, the same myths have been shattered. The Arab Spring, which tossed out strong-man Hosni Mubarak and replaced him with “democratically” elected Mohammed Morsi of the Muslim Brotherhood, has now seen Morsi arrested, with the concomitant emergence of General Abdel-Fattah el-Sissi. Mr. El-Sissi is the political lineal descendant of Mubarak. Last week, he promoted himself to Field Marshall and announced his intent to run for president. Approximately 2000 Egyptians have been killed in the violence that has racked their country for three years. Freedom, in Egypt, remains illusive.

The Mideast continues to devolve into chaos, in spite of (or perhaps because of?) Secretary of State John Kerry flying around the area like a whirling dervish. Deaths in Syria mount, as Assad’s hand seems to be strengthening, which is no surprise with Mr. Putin (who, according to Robert Gates in Duty, “has the eyes of a stone-cold killer”) at his side. Iran won the battle with the United States by getting the sanctions lifted. In return they promised not to enrich uranium beyond the level needed for purposes of energy, but they are still being allowed to keep their centrifuges spinning. And we all know what promises from the Iranian regime are worth!

Al Qaeda has surged back into Iraq, into the vacuum created when the United States pulled out its armed forces. Anwar Province, where more than 1000 American soldiers died, is once again in the hands of terrorists. The Province’s principal city, Fallujah, taken at great costs by Americans, now sits beneath the black flag of al Qaeda. But, not to worry. Mr. Obama, in his State of the Union message said he wants to take America off a “war footing,” with seemingly little concern as to the ramifications a premature departure might create. His words echo those of Vermont Republican Senator, George Aiken who in October 1966 said about Vietnam: we should declare victory and go home. There are consequences to inactions, as well as to actions.

In his State of the Union, Mr. Obama laid out what the press deemed a “moderate” program – a perverse adjective given his announcement that he would act unilaterally if he deemed it necessary. As he said, all he needs is a “pen and a phone.” The fallout from ObamaCare persists with the President admonishing his Republican opponents to come up with their own ideas, despite already having done so. The White House just won’t acknowledge it. The latest plan is the Coburn-Burr-Hatch proposal, which empowers patients rather than bureaucrats. However, since their plan is politically saleable it is being vindictively opposed by those in the White House, the Congress and in political action groups who do not want to cede control of 16% of the economy to the private economy. “Inequality,” continues as the Administration’s mantra. We are told that the gaps in wealth and income are at historic levels. Anyone who has read Edith Wharton knows that is untrue. Common sense tells that the emphasis should be on opportunity rather than redistribution. And opportunity refers principally to education. But the Administration’s emphasis is on pre-K education, rather than school choice. The Obama-de Blasio way suggests they are more willing to keep the ladder’s lower rungs broken than take on teacher’s unions.