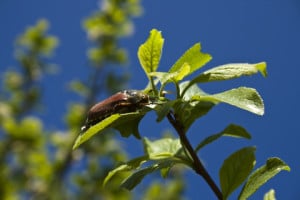 A may beetle resting on a plant.
Image by © Dreamstime

“All things seem possible in May.”

May was full – from California Chrome winning the first and second legs of the Triple Crown, to Monica Lewinsky’s unveiling in Vanity Fair. The month included the death of a favorite writer, Farley Mowat, best known for Never Cry Wolf; the resignation of Barbara Walters and yet another arrest of Alec Baldwin, who impolitely exclaimed: “New York City is a mismanaged carnival of stupidity.” It saw the introduction of Google’s driverless car (with neither steering wheel nor brakes!); the publication of Timothy Geithner’s telling of his side of the 2008 bailout story in Stress Test, but more importantly it gave us my daughter-in-law Beatriz Williams’ third novel, The Secret Life of Violet Grant, and my granddaughter Sarah’s eighth birthday.

The most critical event of the month, in my opinion, was the European Union parliamentary election. While this may not have been a “canary in a coal mine” item, the election should send a wake-up-call that the swollen bureaucracy in Brussels (and not unlike Washington’s) has become increasingly arrogant, impersonal…and disliked. Europeans, as well as Americans, are beginning to understand that the exchange of individual freedom for paternalistic government has a downside. But my guess is that the EU’s leaders in Brussels will ignore those warnings and focus instead on the fact that pro-EU candidates represent just over 75% of the 751 seats in Brussels, and on the relatively low turnout – about 43% of eligible voters, the same as in 2009.

Anti-establishment parties won 150 seats, a pick up from 60 in the 2009 elections. In France, Marine Le Pen’s National Front Party (FN) won 25% of the vote, the largest share of the vote in France[1], giving her a reasonable chance at winning the French presidency in 2017. The vote for Ms. Le Pen is symptomatic of a new nationalism that is in part a reaction to a growing sense that multiculturalism is engulfing French history and culture. At the same time, it was a statement about the ineptitude of Socialist Francois Hollande. Not only is Ms. Le Pen anti-EU, she is anti immigrant. Whether the FN is “fascist,” as EU Finance Minister Wolfgang Schäuble claims, or just desiring of keeping France for the French, I don’t pretend to know. But keep in mind, “anti-immigrant” in Europe is not just anti-Muslim, but is often a euphemism for anti-Semitism.

Apart from France, anti-EU parties did well in Great Britain, Denmark, Austria, Hungary, Greece, Spain and Finland. Most of the dissent was seen in “hard-right” parties; though in Spain an upstart leftist group Podemos, founded in February, garnered 8% of the vote (Spain’s Socialist party lost 9 of their 23 seats); in Greece the Communist-sympathetic Syriza movement was the top winner with 26.4% of the vote, and in Northern Ireland Sinn Féin’s Martina Anderson was the top vote getter. But, in general it was the hard-right that scored. In Britain, the UK Independence Party, which campaigned aggressively on a platform to exit the EU, swept to the top of the national poll with 27.5% of the vote. Nigel Farage was the big winner. Labour was second, with David Cameron’s Conservative Party third. Deputy Prime Minister Nicholas Clegg’s Liberal Democrats Party was fifth behind the Green Party. In Greece, the neo-fascist Golden Dawn took 9.7% of the vote, meaning that more than a third of Greek voters appear upset with the European Union and the alienation of their burgeoning bureaucracy.

It was interesting to note the curious juxtaposition of election results that leaned right and the wide acclamation (by the Left) for Thomas Piketty’s book, Capital in the Twenty-First Century. The difference between the adoration pouring from the academic and political Leftist elite and last week’s vote suggests that Brussels and many of the hard-core Left have chosen to ignore what is happening in the real world. UK Deputy Prime Minister Nick Clegg had, in conjunction with M. Piketty, advocated for a global wealth tax. The voters responded. He and his Party came in last in last week’s election. Too often, when winners arrogantly celebrate amid garlands of victory, they find they have been crowned with wreaths of thorns. Pendulums, like voters, have a tendency to swing back and overshoot in the opposite direction. Political extremes such as fascism and communism are, like a pendulum’s arc, concentric.

The clear message in Europe’s parliamentary elections is that people are fed up with governments that, in a desire to be all things, have gone ballistic in a paternalistic fashion. The European Court of Justice, in a landmark “right to be forgotten” ruling, decided against Google. Google CEO Larry Page argued that more government intervention and tougher regulations will hamper the next generation of internet start-ups and strengthen the hand of repressive government. Will governments tighten controls to root out fraudsters, or will those regulations allow a college student to erase an embarrassing YouTube video? Is not sunshine a deterrent to bad behavior?

May included much more than the European Parliament vote. In the U.S., the scandal of fraud regarding waiting times at the Veterans Administration enjoined Congressmen from both sides of the aisle to force the President to oust VA Secretary General Eric Shinseki; though his resignation will not (and should not) prevent a full scale investigation. Speaking of scandals, Benghazi was back in the news with an e-mail that clearly stated that the “talking points” originated at the White House, and not at some other agency like the CIA, as the President and Hillary Clinton would have had us believe. The month of May also saw the closing of a casino in Tunica, Mississippi, a rare occurrence in a nation addicted to gambling. The month witnessed the rescinding of invitations to conservative speakers at illiberal universities ranging from Brandeis to Smith and from Haverford to Rutgers. But it also included words of admonition to Harvard graduates from Michael Bloomberg, New York’s former mayor: “The role of universities is not to promote an ideology. It is to provide scholars and students with a neutral forum…without tipping the scales in one direction, or repressing unpopular views” – straight talk to Cambridge’s administers and professors who suppress speech when it differs from their predilections.

Around the globe, the world was horrified with the kidnapping of three hundred Nigerian school girls; the stated intent of the kidnappers is to sell them into slavery. God only knows why it took this horrific incident to galvanize the Left as to the intent and capabilities of Muslim extremists! The Ukraine, to the chagrin of Putin, voted to maintain their ties to the West; though it would be a mistake to assume that the Russian leader will vacate the area. (Of course residents of Crimea and others in parts of Eastern Ukraine were unable to vote.) Abdel Fattah al-Sisi, Egypt’s former army chief, won the Egyptian presidency with 93% of the vote, demonstrating definitively that totalitarianism is alive and well in a country that three years ago had high hopes for a re-birth of democracy. The size of al-Sisi’s victory was impressive even for a dictatorship, but not as large as the 96% of Ivy League faculty who supported President Obama in 2012. In India, a Hindu nationalist Narendra Modi was elected Prime Minister of the world’s largest democracy. He is definitively of the right and had helped kick-start the economy of his home state of Gujarat to 10% growth over the past few years. His win is a victory for free-market capitalism, in a nation whose socialistic policies have benefitted cronyism and inhibited economic growth. And, unlike the elections in Europe, turnout was 66.4%, the highest turnout in 67 years of independence.

Besides Geithner’s and my daughter-in-law’s books, two other “wannabe Presidents” published self-serving, campaign-style books: Elizabeth Warren wrote A Fighting Chan
ce, a curious title as the “fighting chance” she exercised to get the job of professor at Harvard Law School was to lie about her heritage, in her claim to be of American Indian descent. The title of Hilary Clinton’s autobiographical book is Hard Choices. (While the book is due out in June, the chapter on Benghazi was released in May, in time to peremptorily influence Democrats sitting on the House committee investigating Benghazi.) Its title is equally deceptive, as history suggests she made very few choices, hard or soft, preferring to let the White House take control, as she flitted around the world. It is one thing to claim you are “re-setting” relations with Russia and another to be in charge, yet simply be an observer as relations deteriorated.

Elsewhere the nation lost one of its preeminent writers when American poet laureate, and author of I Know Why the Caged Bird Sings, Maya Angelou died. Warren Buffett and Charlie Munger hosted their annual “Woodstock for Capitalist” in Omaha. Racism in America came to the fore when a private conversation between the bigoted Donald Sterling and his girlfriend Vanessa Stiviano was recorded by the latter and released over the internet. More fuel was added to the bonfire of racism when Black South Carolina Democrat Representative James Clyburn accused Black South Carolina Republican Senator Tim Scott of not voting “his skin color.” It sounds like Mr. Clyburn would prefer that Congressmen should represent “their people” (to borrow phraseology from Attorney General Eric Holder), rather than all the people. Is that what Civil Rights was all about – a division of the populace, only now at the behest of African Americans? The General Accounting Office announced that they had seen the first decline in participation in the National School Lunch Program in thirty years, indicating that not all children (or parents) are happy with mandates from Washington regarding federal nutrition standards for school cafeterias – a federal program indicative of a belief that big brother (or big sister) knows better than Mom or Dad as to what foods are best for their children.

Stocks closed the month nominally higher and are now up 4.1% on the year. Bonds rallied as well, with the yield on the Ten-year falling to 2.46% from