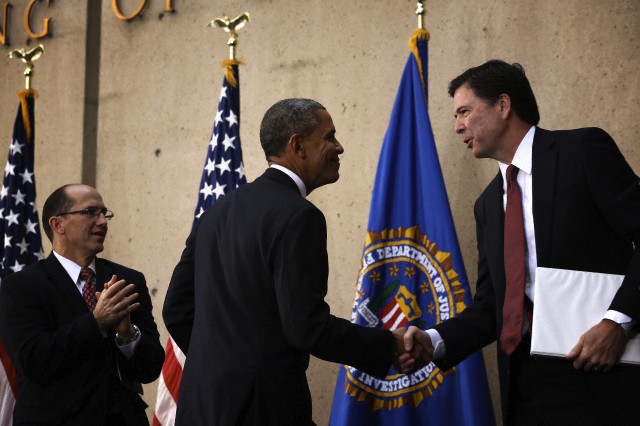 The leaves have ripened to the fall;

Tomorrow’s wind, if it be wild,

October began with a government shutdown blamed unilaterally by the Press on Republicans. It ended with the disastrous rollout of ObamaCare, which HHS Secretary Kathleen Sebelius tried to blame on Republicans, an accusation that not even mainstream media could accept. Later, in front of Congress, she did accept blame, but threw out a schoolgirlish, “whatever,” when asked if ultimate blame lay with the President. If indeed our founding fathers are looking down on what they wrought two hundred and twenty-six years ago, they must be rolling in their respective mausoleums. We no longer have a government of or by the people, only one managed by elitists for the people. We are moving ineluctably toward an Orwellian world.

Operating in worlds of their own, stocks went to new highs and Treasuries rallied. In fact, the Dow Jones Industrial Average (DJIA), on October 10th, experienced its first move of greater than 1.5% since January 2nd, when the DJIA was 14% lower than it is today. It was up 4% in October, while the yield on the Ten-year dropped from 2.6% to 2.5%. GDP for the Third Quarter is expected to have grown at a rate below the Second Quarter’s 2.5%. About 70% of S&P 500 companies have reported Third Quarter earnings. They are generally above estimates, but those estimates had been lowered after the Second Quarter. It’s a game that Main Street seems to play better than Wall Street. It makes one wonder, what would have happened to markets had fundamental news been better?

Ironically, the catalyst for the partial shutdown that began on October 1st was caused by the Democratic Senate rejecting an 11th hour bill passed by the House that would have funded government, if the individual mandate proscribed by the Affordable Care Act were delayed for one year. The Administration barreled ahead knowing the system was not ready, but too proud to say so. By month’s end Democrats must have wished they had accepted that proposal. If they had, there would have been none of the negative press they are now receiving. Even worse for the Administration, if Ms. Sebelius knew that the rollout was questionable, as now appears likely, there is now a potential victim with a target attached to her hindside.

Other news of note during the month included lifting the debt ceiling of $16.7 trillion against which federal government borrowing had been bumping. The ceiling was temporarily raised, but a final decision was postponed for a few months. The National Debt Clock, which had been offline, immediately punched through $17 trillion like a knife through butter. In a “dog-bites-man” story, the President announced that Janet Yellen would be elevated from Vice Chairman of the Federal Reserve to Chairman. She has been described by one of her fellow Fed governors as a very smart woman who has never been right on policy. Given her history, markets can expect that easy money will persist, expressed in a zero Fed Funds Rate and a continuation of quantitative easing – the monthly purchases of $85 billion in Treasuries and mortgages. Markets love easy money – at least until they don’t. If you will pardon the pun, an absence of tapering has made Tapirs of Wall Street.

There was other news. The NSA was shown to have been listening to phone calls, not only of our enemies, but of our friends as well. The President, at the United Nations and after cancelling any military action against Syria, offered an olive branch to Iran in the form of a handshake, which wasn’t returned. But when Iranian President Hassan Rouhani agreed to accept Mr. Obama’s phone call, the latter was as excited as a teenager getting his first date to the prom. Iranian centrifuges are still spinning, probably keeping pace with the peripatetic John Kerry, as he dashes from Damascus to Tehran to Tel Aviv, with the odd stop in Washington. This past Wednesday, Syria announced they were firing Deputy Prime Minister Qadri Jamil who had worked to broker the peace. He was, according to the New York Times, accused of spending too much time outside of Syria – an odd accusation for a diplomat.

In announcing he was suspending hundreds of millions in military aid, the Obama Administration rebuked Egypt’s ruling generals – Mr. Obama doesn’t seem to like generals – for their bloody crackdown on the Muslim Brotherhood, despite the latter’s declared policy of killing Americans. However, according to “The Week,” senior U.S. officials (whoever they are) said much of the $1.5 billion in aid would continue to flow. (After all, it’s only the taxpayer’s money.)

Back home, it appears that Mr. de Blasio will sweep into the New York City Mayor’s office. He is leading the lackluster Mr. Lhota by something like thirty points. The left wing of the Democratic Party has adopted the moniker, “Progressive,” a word borrowed from turn-of-the-previous-century Republicans. The word “liberal” to me has a proud heritage, as I associate it with 19th Century liberalism that celebrated the individual over the state. But it must have taken on too much of “lefty” baggage for the likes of Mr. Obama and Mr. de Blasio. The latter is proud of having worked with Nicaraguan Sandinistas, suggesting he was either too stupid to understand or chose to ignore their anti-Semitism and ties to the Communists. He is also a proud supporter of Acorn, a disgraced community organizing organization. He is for restricting the police, the men in blue who have kept New York relatively clean and safe over the past two decades, and he supports the Teacher’s unions in their fight against the city’s children.

New York is unusual. It has two extremes: the very rich whose private security makes safety a non-issue and who wouldn’t recognize a public school if they stumbled across one. They maintain legions of tax lawyers to avail them of every loophole. Many keep a pied-à-terre in the city that could house three families, while ensuring their income is reported in the Caymans. The poor have been conditioned, like Pavlov’s dog, by a government with whom they have a symbiotic relationship – power to government in exchange for entitlements. The middle class in New York, which, despite median income numbers, is really everyone earning less than $250,000. They are being squeezed by taxes and housing. They are seen by government solely as a source of revenue. We are likely to see another exodus. It is dispiriting and unlikely to end well.

October ends with Halloween, which is fitting given the discombobulation that is a function of discord in Washington, an anemic economy, a Fed that keeps its “pedal to the metal,” and markets that blissfully roll merrily on. It is a good thing that today is All Saints Day, as, given the state of the world and the blithesome attitude of people and markets, we may all be in need of one. One good thing; we get an extra hour of sleep this weekend!

The views expressed on AustrianCenter.com are not necessarily those of the Austrian Economics Center.
hayek_admin2019-01-14T06:42:07+01:00