The noninterventionists told you so 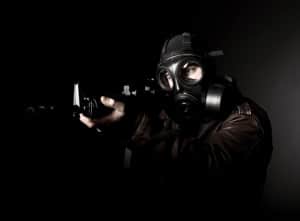 Contrary to popular belief, there is no satisfaction in being able to say, “I told you so.” This is especially so with Iraq, where recent events are enough to sicken one’s stomach. Yet it still must be said: those who opposed the George W. Bush administration’s invasion of Iraq in March 2003 — not to mention his father’s war on Iraq in 1991 and the sanctions enforced through the administration of Bill Clinton — were right.

The noninterventionists predicted a violent unraveling of the country, and that’s what we’re witnessing. They agreed with Amr Moussa, chairman of the Arab League, who warned in September 2002 that the invasion would “open the gates of hell.” There was no ISIS or al-Qaeda in Saddam Hussein’s Iraq before the U.S. invasion.

Once again, the establishment news media have ill-served the American public. In the buildup to the 2003 bipartisan war on Iraq — which was justified through lies about weapons of mass destruction and complicity in the 9/11 attacks — little time and ink were devoted to the principled opponents of intervention.

Maybe war builds circulation, ratings, and advertising revenues. Or maybe corporate news outlets fear losing access to high-ranking government officials. Whatever the explanation, far more media resources went toward hyping the illegal aggressive war than to the case against it.

No one can grasp the complexity of one’s own society, we noninterventionists said, much less a society with Iraq’s unique religious, sectarian, and political culture and history. Intervention grows out of hubris. Nonintervention accepts the limits of any ruling cadre’s knowledge. The war planners had no clue how to reform Iraqi society. But there was one thing they did know: they would not suffer the consequences of their arrogance.

You’d think that with the noninterventionists proven right, the media would learn from their folly and turn to them to analyze the current turmoil in Iraq. But you’d be mistaken.

With few exceptions, the go-to “authorities” are the same people who got it wrong — not all of them neoconservatives, because interventionists come in different stripes. The discussion today is almost exclusively over how the Obama administration should intervene in Iraq, not if it should intervene. Even Paul Wolfowitz, one of the wizards of the original invasion, gets face time on major networks. He was part of the crowd which said that American invaders would be greeted with rose petals, that regime change in Iraq would spread liberal democracy throughout the Middle East, and that even peace between the Israelis and Palestinians would take place.

These “authorities” were wrong about everything — assuming they believed their own words — but that seems not to matter.

They have their own story, of course. It’s not the 2003 invasion that has brought Iraq to disintegration, they say. It is Barack Obama’s failure to leave U.S. troops in Iraq after 2011. This argument doesn’t work.

First, Obama (wrongly) asked Prime Minister Nouri al-Maliki to allow troops to remain beyond the deadline negotiated by Bush, but al-Maliki insisted that U.S. personnel who commit crimes be subject to Iraqi law, a reasonable demand. Obama would not accept that.

Second, why should we believe the advocates of the original invasion when they say a residual U.S. force could have prevented the offensive now conducted by ISIS, aka the Islamic State of Iraq and al-Sham (Levant)? It’s far more likely that if American troops were in Iraq today, they would be killing and dying.

Al-Maliki is everyone’s favorite scapegoat now, and the ruler known as the Shi’ite Saddam certainly is a villain. He has arrested respected Sunni figures and ordered troops to shoot peaceful Sunni demonstrators. But recriminations against the Sunnis, who were identified with Saddam’s secular Ba’athist party, started with the American administration of Iraq.

U.S. intervention now would be perceived as taking the Shi’ite side in the Iraqi sectarian war. (Obama is intervening, though on the opposite side, in Syria, which helped build ISIS.) The conflict is complicated — not all Sunnis and Shiites want sectarian violence — but that’s all the more reason to think that neither American troops nor diplomats can repair Iraq. The people themselves will have to work things out. As for terrorism, it is U.S. intervention that makes Americans targets.

Source: The Future of Freedom Foundation

The views expressed on AustrianCenter.com are not necessarily those of the Austrian Economics Center.
hayek_admin2019-01-14T06:16:51+01:00