“The President and his Higher-Ed Plan” 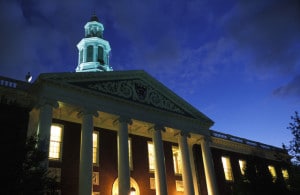 In the real world, demand affects cost – the higher the price, the fewer the takers. In Mr. Obama’s Washington, there is the belief that government policies – not markets – can better influence price, at least as far as consumers (read: voters) are concerned. In introducing his higher-ed plan last week, Mr. Obama acknowledged – at least in part – the truth of the Bennett Hypothesis[1]: that decades of government subsidies have had the consequence of pushing college costs higher.

“It is time,” Mr. Obama said, “to stop subsidizing schools that are not producing good results, and reward schools that deliver for American students and our future.” High-minded words, but, like most things the devil is in the details. The President’s political philosophy sees government as an instrument for good and that spending on public services is essential for middle class prosperity. In other words, he doesn’t want to reduce subsidies, he wants to use the dollars to incentivize better performing schools.

The President’s plan, as outlined over a recent tour of colleges and universities – what Ohio State’s Richard Vedder calls these “isolated enclaves of nonreality,” – is composed of four parts. At the heart of the plan would be a government-run college ranking system. Second, would be a “race to the top,” pitting states against one another. Third, student loans would become eligible for income-based repayment schedules, including forgiveness, after a specified period of time. Four, the plan calls for greater use of MOOCs and other technologies, but leaves in place a regulatory apparatus that gives accrediting agencies a central role.

The problem Mr. Obama inherited has its roots in the Higher Education Act of 1965, which created federal scholarships and low-interest loans. By 1981, annual spending on student loans amounted to $7 billion. Today, we are spending $105 billion a year, with over a trillion dollars in student loans outstanding. Over the same time, grants, such as Pell Grants, have risen from $6.9 billion to $49 billion. The amount of dollars involved and the annual increases suggest a potential, on-coming train wreck. The questions are: Does the President’s proposal address the root cause? Will his plan do anything to make college more affordable? Will its consequences turn out to be perverse, for example discriminating against the very students he is trying to help? Does it consider the question Richard Vedder posed in last weekend’s Wall Street Journal: When only 20% of jobs require college degrees, why are 30% of the college-age population getting degrees?

Let’s look at the four parts of the President’s plan. At its heart is the ranking of colleges, which will require a new government bureaucracy to measure a number of factors:  What exactly do fees and tuition cover? How many low income students does a school admit? What are the graduation rates? How much debt is outstanding among the student body and how concentrated is it? What are the transfer statistics? What kind of jobs do graduates find and how much do the pay? In all, it is, as one organization puts it, a “datapalooza.” The answers to these questions raise more questions. For example should starting salaries be considered, or earnings five or ten years out? As Daniel Henninger noted in yesterday’s Wall Street Journal: “Will professors at participating ObamaEd universities become subject to the same cost-containment rules that, say, Medicare imposes on doctors?” Creating another bureaucracy will cost taxpayers.

There are already a number of private ranking systems, such as U.S. World & News Report. They may have flaws, but collectively they are reasonably effective. As in all other aspects of life, markets work, and they work best when government interference and regulation is as minimal as reasonably possible.

A plan to pit states against one another would appear redundant, in an already competitive environment. There are about 4200 private and public colleges and universities, about 3000 of which are four-year colleges. Competition exists. It is hard to imagine that government could improve on the situation. State universities rely on out-of-state students to keep tuitions as low as possible for in-state students. Thus, they aggressively pursue out-of-state students. The only place where colleges have not had to compete has been on price, and that is because of the oversized role played by government. Government would best temper rising tuitions by reducing their support of low-cost loans. University administrators have not had to concern themselves with the price of their product because they know the funds are available at a very low cost to their client-base. Personally, I have less objection to grants, like Pell Grants, as long as they are awarded on meritocracy. The best students, regardless of where they come, are the ones we should all be encouraging, if we want our country to compete effectively in a global environment.

Mr. Obama’s third point – tying repayment schedules (and ease of default) to the type of job one takes could have serious consequences, not all intended. It implicitly assumes that either a government job or work for a non-taxable foundation has more merit than working in the private sector. Why? Public sector jobs pay more than private sector ones and have greater benefits and security. In terms of eleemosynary institutions, questions would be raised as to whether a 501(c)(4) institution is eligible, especially if they support conservative values. Would we trust the IRS to make those decisions? Keep in mind, private sector jobs pay for both public sector jobs as well as those in the tax-free world. They are the engines that run our economy. Second, the taxpayer is already the lender, and this plan will lower the interest he receives and increases the likelihood that the principal will not be repaid. Mr. Obama feels free to promise more spending on the part of taxpayers, because those actually paying federal income tax now represent a minority of the electorate. Alexis de Tocqueville once presciently said: “The American Republic will endure until the day Congress discovers it can bribe the public with the public’s money.” We are there.

MOOCs and their like have been (and will be) the private sector’s response to rising tuition costs. It is a subject I discussed last May 23rd (“MOOCs – Are They Worth It?) My personal conclusion is that they are, but they are not without challenges and consequences. For example, MOOCs could standardize education in a fashion that might be unhealthy for a diversified student body and country. They risk making on-campus studying even more elitist and raise the possibility that smaller, less-endowed colleges may simply disappear. Other than accreditation, government should have no role in MOOCs. Joseph Schumpeter’s principal of creative destruction works in education, as well as in industry. Keep in mind, the key word in Mr. Schumpeter’s adage is the adjective, creative.

The U.S. has the finest higher education system in the world. That is largely because it is mostly private and, in any case, competitive, at least in terms of attracting the best and the brightest. However, since passage of the Higher Education Act of 1965, one major aspect in the business of managing colleges and universities has provided them monopolistic-like powers, and that is that government (through loans) provides tuition, at a nominal charge, to all students who want or need it. Colleges and universities compete for students, but do not have to worry about revenues.

In a sense, the Higher Education Act of 1965, like so many well-intentioned government programs, was a Faustian Bargain. The promise of college and higher incomes were dangled before the credulous eyes of millions of young people. But its promise, in too many cases, has proved to be nothing more than a “castle in the sky.” Reality has meant debt and too few jobs for many of our youth. College is not a right; it is an opportunity. It is true that college graduates, on average, make more money than those with only high school diplomas. However, in terms of incomes there will always be inequality. An obvious example, though unrelated to a discussion on colleges, is major league baseball. In 2007, Alex Rodriguez signed a ten-year contract for $275 million, ten times the average major league baseball player’s salary for that year – 500 times the average household income. In contrast, a single ‘A’ ball player makes about $10,500 a year – one fifth the average household income. The same is true in all endeavors. People are paid based on real or perceived added value. In a business with 200,000 employees, there is only one CEO. In a nation of 320 million people, there is only one President. It cannot be otherwise. People must find the work that suits their training, abilities, temperament and desire.

In all endeavors, one should never underestimate the importance of aspiration, a characteristic not taught in college. In his book, Why Coolidge Matters, Charles C. Johnson quotes the former President: “Nothing in the world can take the place of persistence. Talent will not; nothing is more common that unsuccessful men with talent. Genius will not; unrewarded genius is almost a proverb. Education will not; the world is filled with educated derelicts. Per