The Shadows of History Confront the Appetite for Risk: Consolidating the Upward Trend 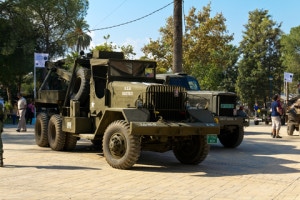 In 1940, the then Soviet Union overthrew the governments of the Baltic nations (Latvia, Estonia, and Lithuania), rigged the elections, and forced the newly “elected” governments to request admission into the USSR. Today’s Russia plans to annex the Crimea region after Sunday’s referendum. Efforts might be made for the endeavor to be repeated in the Easter part of Ukraine, but things will be more challenging there. Concerns are being raised that “we are two steps away from a Cuban missile crisis and three steps away from a world war”. NATO planes are stationed near the Ukraine border, the US announced the release of millions of barrels of oil from its strategic reserves, rumors are being circulated that the US transported Ukrainian gold, and President Obama talked about “collective defense”. With all due respect, we believe that the case is overblown and will go away in a few weeks. It’s an opportunity for some potential market retreat that will ultimately enhance an upward trend.

While the geopolitical wall of worries is being built up due to the fact that many European countries depend on Russian gas – and that flow of gas may be interrupted as retaliation against the anticipated sanctions – another wall of worries is being erased in Asia due to the first corporate default in China and Premier’s Li Keqiang’s comments that more defaults may be expected, especially for those toxic wealth products circulated by the Chinese shadow banking system. It is a fact that China is slowing down. However, like in the Crimea situation, the defaults in China have the flavor of smoking mirrors and are intended for internal consumption. President Xi does not desire a hard landing, and Putin knows that his Eurasian dream is dead. The rest is mainly to fill the headlines and reflect buying opportunities, including some commodities (in the foreseeable future) which have been hit hard lately.

The basic reason for this assessment is the fact that both Russian and Chinese economies are intertwined into the global financial system which depends on the river called collateralization and securitization of assets. The latter two exhibit clear signs of significant revival in the last few months. It doesn’t mean that the flow of that river cannot be reversed back, but the chances of that happening are low. In addition, Chinese total credit last month was one of the highest ever (exceeding expectations by more than 40%). China is addicted to credit as is Russia to foreign reserves via gas sales.

Repo rates and corporate yields may rise in China but they are coming from very low levels. They need to rise – and hence credit growth to slow down – and some defaults to take place in order for the hard landing to be avoided. If that happens, Chinese stocks may decline indeed, but in the long term that will be good news. On the other hand, if that does not happen, then China will face a hard landing in two-three years that could create a global tsunami. The turn that China is experiencing, is simply a slowdown in monetary stimulus which is very much needed, but it is not deleveraging. The latter happens when total debt as a percentage of GDP declines, and in China it keeps rising. The growth in Chinese credit can be seen below and is one more reason to believe that the markets will affirm an upward trend, for whatever the long term consequences may be.

The commodities’ consolidation phase reflect more the geopolitical risks than the Chinese concerns. Given the role that commodities play in the collateralization and securitization phase, such consolidation is expected given the geopolitical developments. Of course, gold has gained – affirming one more time its status as a safe haven – but we anticipate those gains to retreat by early summer, if not sooner. The time will come to buy again the ultimate real money that is no one else’s liability.

As a closing note, I would like to note that the upward trend is expected to be boosted by June when Kuroda (the Japanese governor of the central bank, BoJ) blasts the markets with another round of QE. In that round I expect that BoJ will proceed with more purchases of not just government bonds but also of other securities as it has been doing lately (see graph below). 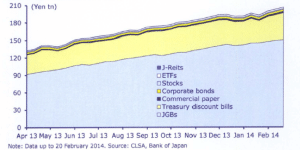 Maybe Kuroda is paving the way for other central banks, when hope may be vanishing in a couple of years, unless serious reforms are implemented.

For now, let the echoes of the words of Presidents Truman and Kennedy shape our thinking for the next few weeks:

“The seeds of totalitarian regimes are nurtured by misery and want. They spread and grow in the evil soil of poverty and strife. They reach their full growth when the hope of a people for a better life has died” (President Truman in 1947, proclaiming his foreign policy dogma).

“Let every nation know, whether it wishes us well or ill, that we shall pay any price, bear any burden, meet any hardship, support any friend, oppose any foe, to assure the survival and the success of liberty. This much we pledge –and more” (President Kennedy in his inaugural address 1961)