“The State of the Union” 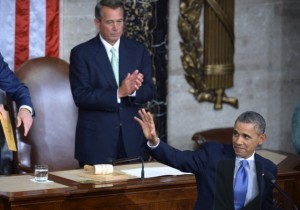 More than anything, the State of the Union is a chance to see and be seen. Even those on the Republican side of the aisle vie for seats on the aisle, so their constituents can see them shaking hands with the President they have vowed to oppose. It is an opportunity for this President to use the soaring rhetoric, which is his greatest strength, and to bask in the applause of those who fervently admire him, as well as from those who despise him, but who do not to appear small-minded.

The Constitution, in Article II, Section 3 states: “He [the President] shall from time to time give to the Congress Information of the State of the Union, and recommend to their Consideration such Measures as he shall judge necessary and expedient.” The founders would be appalled at the imperial extravaganza that annual message now entails. In the last few decades this event, of a republican country, has assumed the trappings of the royal Court at Versailles in the years just preceding the French Revolution.

Mr. Obama is fond of his voice, so he speaks for a long time, giving little consideration to the overweight and out-of-shape Congressional members and others who are required by custom to be there, and who must leap from their seats every minute or so, exhausting themselves as though they had been in a spinning class. They look like the teenage girls who once did the same thing for Frank Sinatra and the Beatles. The difference is that the girls’ enthusiasm was real, while what we see from our comfortable seats in our homes is often feigned.

While “inequality” may be the word “du jour,” there is nothing in our society that so defines inequality as the spectacle of smug politicians preening for the cameras that continuously stream videos into the homes of those who wished they had voted for the other guy.

We never learn very much, if anything, from State of the Unions. What we want is the tweetable answer given to the question posed by Daniel Webster from his grave, according to Stephen Vincent Benét: “Neighbor! How stands the union?” “Rock bottomed and copper-sheathed, one and indivisible,” was the only answer acceptable to the spirit of Mr. Webster. What we get today is a cornucopia of trite and stale preferences. All are geared for applause and sound wonderful in the telling, but most are impossible to achieve. I only wish we were “copper-sheathed, one and indivisible.” We aren’t anymore.

What we got last night was over an hour of lines designed for compassion and applause. Like his predecessors, Mr. Obama is an expert at making his arguments with emotive language and stage props. We had a recently healed young woman and a wounded warrior. We received a laundry list of “accomplishments,” which were generally literally true, but disingenuous in their incompleteness: 8 million jobs added in the past five years, but no mention of the loss of 10 million jobs; for there are 2 million fewer people employed today than when Mr. Obama took office; the deficit, it was noted, has been cut in half, but it is still larger than under any other previous President.

A year ago the President laid out an aggressive agenda: “Investments” in education, manufacturing, infrastructure and renewable energy were on the list. He called for immigration reform, tax and entitlement reform and gun control. We didn’t get any of the “reforms” nor did we get control of guns last year. What we got last year was 57 laws passed by Congress, the fewest in history according to Voice of America, and 21 Executive Orders signed by the President, according to the American Presidency Project. When one thinks about it, Washington was designed by the founders to be gridlocked. The passage of legislation was deliberately made difficult.

In an election year, with a President showing little interest in working with his Congressional counterparts and with a Congress increasingly recalcitrant, we may get fewer laws passed this year than last, but we will likely get more executive actions. Dan Pfeiffer, assistant to Mr. Obama, said the President would use the speech to announce executive orders he can issue without Congressional approval, to test the boundaries of executive authority using the power of the “pen and phone.” He did so with the largely meaningless announcement that all companies that contract with the federal government must pay a minimum wage of $10.10. (I say “largely meaningless” because very few individuals would be affected.) Sadly, we keep moving toward imperial leadership, something over which we once fought a revolution.

From the lofty ideals requested a few years ago, we heard requests of a “small-ball” nature. The lead editorial in today’s New York Times is headlined: “The Diminished State of the Union.” Other than an announcement that he is using his executive authority to create “myRA” accounts, there were no new initiatives. The myRA accounts would be automatic enrollment accounts for employees without access to a workplace savings plan. We heard much of the same litany from previous SOTUs: closing Guantanamo; tax reform (when he chose to ignore his own panel’s recommendation); immigration reform (but his way, not the piecemeal approach that Republicans have offered); climate change (“it is a fact”); new trade agreements (something on which he has continuously dragged his feet); universal Pre-K education: infrastructure spending (but no mention of the Keystone Pipeline); downsizing the military (“we must move off of a permanent war-footing”); federally funded research; natural gas (but no mention of why fracking on federal lands has not been allowed); inequality in incomes, wealth, between the sexes and marriage, and raising the minimum wage. The Affordable Care Act did not get mentioned until forty minutes into the speech. (The President no longer refers to it as “ObamaCare.”) Not surprisingly, there was no mention of its troubled roll-out.

The speech was described by pundits as small potatoes, upbeat (which it was, as Mr. Obama speaks well), predictable and harmless. The biggest applause of the evening was when Mr. Obama acknowledged Sergeant Cory Remsburg, a badly wounded U.S. Army Ranger. He received a two-minute standing ovation. It was well deserved, though ninety or so seconds into the applause, no one seemed to know when to stop, and Sergeant Remsburg was beginning to look embarrassed.

I take exception to the term “harmless.” It is never harmless when the response to any President that he is assuming more powers is unbounded enthusiasm. His statement that he was eager to work with Congress, “but whenever and wherever I can take steps without legislation I will do so,” drew enormous applause. It reminded me of old newsreels of fascist and national socialist speakers whipping their listeners into a frenzy. I found the moment chilling. And I found it troubling when one of the nation’s most prominent newspapers concurs. The editors of the New York Times wrote this morning: “Taking the offensive by veering around Congress is a move long overdue.” Have they really thought through the consequences of that statement?

As is often the case, the people are ahead of Washington. Fewer and fewer people tune in to the State of the Union message. A year ago the Wall Street Journal commented that the roughly 33 million who tuned in was “just slightly higher than your average first-run Seinfeld episode two decades ago.” The entire spectacle has become an imperialistic anachronism. It is time when the president should heed the advice of Thomas Jefferson when, more than two hundred years ago, he decided the annual message should be delivered in paper form to Congress. His example was followed for more than 100 years, when that most imperial of Presidents, Woodrow Wilson decided to give the speech in person. What Jefferson did could be done today and made available to the people on-line. It would save millions of dollars and prevent the risk of having so many government officials under one roof at one time. None of us would be worse off for not having to listen to it.