The Symphony of Asset Management: Caravaggio Meets Atlas in the Chameleon Age

We have entered a period where convoluted developments change outlook. Could it be a chameleon period? At one point we celebrate the low oil prices and in the next period we consider them a curse. At another juncture we celebrate an Arab spring to find out that it was a harsh winter. And yet, while thinking that it was toxic assets that led us into the crisis, we keep piling up on debt collateralized by re-hypothecated instruments and structured securities whose real collateral value might be questionable during turbulent times.

In ancient Greek mythology Atlas was the Titan god who was condemned to hold up the heavens on his shoulders after the Titans’ revolt against the Olympian gods failed. In global geoeconomic and geopolitical terms the role of Atlas is thought to have been played by different countries (e.g. Arabs, Europeans, and now the United States) and institutions (e.g. colonization, gold standard, central banks).

The Chameleon Age might be an era when meta-modernity uses contemporary instruments however the musicians themselves are dressed up in antique clothes. But isn’t that what Caravaggio was trying to imply in his 1595 painting known as The Musicians?

Where have all the concerns gone that scared markets and investors in the beginning of the year? As the Financial Times reported a couple of days ago, the global equities index has recently surpassed its 200-day moving average with emerging markets and the US scoring significant gains since their lows in February. 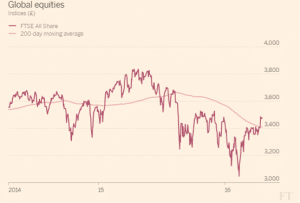 However, the above needs to be contrasted with what is happening in Europe. As the following graph demonstrates, European equities are lacking behind, and our opinion is that the non-performing loans along with synthetic products in EU banks are making Atlas bend his knees as the burden becomes heavier and heavier. 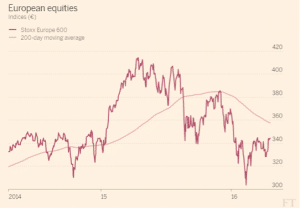 Speaking of non-performing loans, the latest developments related to the rescue fund that Italian authorities are putting together might be telling of the size of the impending problems in the EU banking sector. The Italian banking sector is at a pivotal moment, facing non-performing loans (NPLs) to the tune of $400 billion, which represents 20% of Italy’s GDP. Of that amount, half represents loans to insolvent corporations. The labyrinth of the EU banking sector and its linkages, make the whole Italian banking system and possibly the EU banking system susceptible to contagion. If a cash-call for some smaller banks fails, then bigger players (such as UniCredit) will be called to the rescue, which in turn – due to their own internal problems – may be facing capital calls.

Italian authorities put together a plan called Atlas! Atlas is supposed to bail out the smaller banks, and then use leverage in order to buyout NPLs, securitize them into tranches and sell the new paper to investors, in order to raise the price of NPLs and thus provide relief to banks’ books. Needless to say that the contingency risks in this whole enterprise are significant.

So while the markets (developed, developing, and frontier) seem to be recovering, Atlas is supposed to bear the burden of a systemic country’s banking sector and hold the skies before they crack and the bail-ins materialize.

My only question is what would happen if Atlas goes on strike? Possibly then a Clinton-Kasich ticket may be drafted and Caravaggio will be called in to paint the inauguration next January in the midst of a symphony where the instruments will be new but the clothing antiquated.

The views expressed on AustrianCenter.com are not necessarily those of the Austrian Economics Center.
hayek_admin2019-01-14T05:56:56+01:00