“The Volcker Rule – It’s no Panacea” 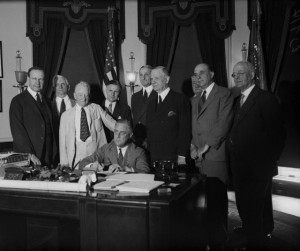 As America was entering World War I, Joe Young and Sam Lewis wrote a song that became a huge hit at the time: “How ‘Ya Gonna Keep ‘Em Down on the Farm (After They’ve Seen Paree).” Something similar happened in the banking industry fourteen years ago. In 1933, the Glass-Steagall Act, which separated commercial and investment banking activities, was signed into law by President Franklin Roosevelt. Sixty-six years later, President Bill Clinton signed the Gramm-Leach-Bliley Act, which marked the death knell for Glass-Steagall. It allowed commercial banks to fish in waters heretofore reserved for investment banks. Seven years later, the world witnessed one of the worst financial crises in history. Was the latter a product of the former?

Once liberated from the constraints of Glass-Steagall, American bankers, like America’s farm boys on leave in Paris in 1917, let loose. Exuberance and profligacy saw no bounds, especially as losses could be socialized, while profits would remain private. There death of Glass-Steagall, in my opinion, abetted the credit crisis of 2008. It had become easier for banks to speculate. Of course, changing the stature of commercial banks was not the only factor leading to the crisis. The concomitant explosion in the use of derivatives and computerized/algorithmic trading added to the speculative nature of the system. But government was a major component. Not only had they done away with Glass-Steagall, they were responsible for creating an environment of “too big to fail.” The threat of bankruptcy is critical to the functioning of capitalism. Removed, it loses its discipline. Capitalism without failure is like religion without sin. It does not work.

It is natural for markets to expand and contract. “Financial markets,” as Seth Klarman noted last June, “will never be efficient because markets are, and will always be, driven by human emotion: greed and fear.” Stability leads to instability, as economist Hyman Minsky noted in the 1960s. Complacency and low volatility encourage reckless behavior. In allowing banks to speculate with depositors’ money, a consequence of the elimination of Glass-Steagall, government helped create a more dangerous situation. It was that careless and carefree attitude that allowed JP Morgan chairman Jamie Dimon to initially refer to the $6 billion loss in London as a “tempest in a teapot.”

Similarly, the development of sophisticated financial risk management platforms across global lines gave confidence to traders, investors and economists that tail risk could be confined. “Tail risk,” as Alan Greenspan explained in the November/December issue of Foreign Affairs, “refers to the class of investment outcomes that occur with very low probabilities, but that are accompanied by very large losses when they do materialize.” Most economists rely on mathematical models to calibrate risk. The ability to quantify risk formulaically instills an unwarranted sense of confidence in his or her prognostications. In economics it can cause one to ignore human behavior, which is impervious of being quantified with any precision. It is not often that I find myself in agreement with Paul Krugman, but I do when he says that it is fine to use mathematics in economic forecasts, but the discipline “should be the servant, not the master.”

Economic forecasting is, in fact, as much art as science. Nevertheless, most people, including policy makers in Washington find it easier to make predictions based on mathematical models, rather than attempting to understand how humans behave in myriad circumstances. CBO (Congressional Budget Office) forecasts are a prime example.

The Volcker Rule may help temper those problems, but will not resolve them. Its length and complexity will better serve management working with creative lawyers than depositors or taxpayers. Nancy Pelosi once said of ObamaCare, “We must pass it to find out what’s in it.” Dodd-Frank, the parent of the Volcker Rule, is equally incomprehensible. At 828 pages, it is more than twenty times as long as Glass-Steagall. Its 398 separate “rulemakings” run to an additional 14,000 pages. (And two thirds of the rules remain unfinished!) The Volcker Rule alone has an 882-page preamble, which does little to explain all its ambiguities. For example, banks can engage in underwriting and market-making, as long as such activities are “designed not to exceed the reasonably expected near term demands of customers.” What, for example, is meant by “reasonably expected near term demands?” Such legal claptrap is like Manna to lawyers. The denser the material, the better they love it, especially when they bill at $700 or more an hour. “Complexity is regressive,” as Christopher Caldwell wrote in last weekend’s Financial Times. In 1873, Walter Bagehot, the long-time editor of “The Economist,” published Lombard   Street. In the book, he wrote, “the business of banking ought to be simple. If it is hard it is wrong.” What was true 140 years ago is true today. Glass-Steagall was written in 37 pages and served the nation well for more than six decades. Will we be able to say the same of Dodd-Frank six decades from now?

Freedom to speculate is inherent to our beliefs and critical to the unencumbered workings of capitalism, but it is best done individually and in private partnerships that have no call on government assistance should trouble develop. As Isaac Newton made clear in his Law of Motion, for every action there is an equal and opposite reaction. Similarly, in investments: the greater the potential profit, the more likely the probability of loss. Depositors in commercial banks, by the nature of their savings, are risk-adverse. Preservation of capital and safety are their concerns. When banks use depositors’ capital to purchase esoteric, high-risk assets, instead of, for example, straightforward commercial or mortgage loans, they violate the basic tenets of banking.

It is not feasible to retreat to a simpler world. Technology has allowed the creation of derivatives of derivatives – assets so complicated they must use algorithmic equations and require math PhDs to implement them. The creative use of leverage permits the possibility of outsized returns. Most senior bankers have little understanding of the creative instruments contrived in the laboratories that are their proprietary trading desks. But they certainly enjoy the fruits when trades are profitable. Being able to pass losses onto taxpayers naturally increases their level of comfort and their risk tolerance. Likewise, most regulators don’t understand these new and complex instruments. If they did they would be working for the banks, not for some regulator in Washington or Chicago. Rules should be simple: easy to understand, implement and enforce. The simplest requirement would be for an easily enforceable tangible common equity ratio to be required, one that demands more equity as banks increase in size, on the thesis that banks too big should never fail.

Weaning banks off the platforms that have made a few of them enormously wealthy will be difficult, but not so difficult, I suspect, as would be the task of cleaning up after another (and larger) Lehman bankruptcy. Instead of transparency, the new rules are deliberately designed to be opaque; so that unscrupulous bankers abetted by equally shameless attorneys will be able to seek out exceptions and loopholes. To misquote Dallas Fed President Richard Fisher (though in a way I believe he would approve), it is time to reassume a more humble commercial banker. As Walter Bagehot, wrote so long ago, banking should be simple – and so should the rules governing bank behavior. While the Volker Rule is better than nothing, it does not meet Mr. Bagehot’s more stringent requirements.

“The thought og the day” by Sydney Williams