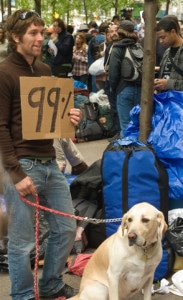 by Andrew B. Wilson

Ludwig von Mises, a mentor to Friedrich Hayek and a major figure in economics in his own right, set out his views on capitalism and inequality in a slender book (just 113 pages) called The Anti-Capitalistic Mentality. First published in 1954, and readily available online for less than $10, it is well worth reading today.

Mises’ treatise on why capitalism sits in the dock, falsely accused of various crimes against humanity, is a classic: bravely saying what still needs to be said. It offers a robust rebuttal to the jaundiced view of capitalism found (most recently and conspicuously) in Thomas Piketty’s Capital in the Twenty-First Century.

In The Anti-Capitalistic Mentality, Mises asks: Why do so many people “loathe” capitalism? He gives a threefold answer.

The first factor is simple ignorance. Few people credit capitalism for the fact that they “enjoy amenities that were denied to even the most prosperous people of earlier generations.” Telephones, cars, steel-making, and thousands of other advancements are all “an achievement of classical liberalism, free trade, laissez faire, and capital” — with the driving force being the profit motive and the deployment of capital used in the development of better tools and machines and the creation of new products. Take away capitalism and you wipe out most or all of the extraordinary progress that has been made in raising living standards and reducing poverty since the dawn of the Industrial Revolution.

The second factor is envy, the green-eyed monster, which causes many people to think they have gotten the short end of the stick. As Mises observes: “Capitalism grants to each the opportunity to attain the most desirable positions which, of course, can only be attained by the few … Whatever a man may have gained for himself, there are always before his eyes people who have outstripped him … Such is the attitude of the tramp against the man with the regular job, the factory hand against the foreman, the executive against the vice-president, the vice-president against the president, the man who is worth three hundred thousand dollars against the millionaire, and so on.”

And finally, the third factor is the unceasing vilification of capitalism by those who seek to constrain or destroy it. As Mises notes, the critics and anti-capitalists go on telling and re-telling the same story: saying that “capitalism is a system to make the masses suffer terribly and that the more capitalism progresses and approaches its full maturity, the more the immense majority becomes impoverished.”

Indeed, that is the story Piketty tells in his book, which has soared to the top of the New York Times and Amazon best-seller lists. Does inequality rank as the great defining issue of the twenty-first century? If you agree with Piketty, it does. He contends that disparities in income and wealth are spiraling out of control, setting the haves- against the have-nots. Without “confiscatory” taxes to create a new social and economic equilibrium, he warns, today’s democracies may ultimately collapse, taking capitalism and the capitalists down with them.

Piketty makes much of the seeming fact (some dispute his statistics) that those at the highest levels of income in the United States have claimed a sharply rising share of total U.S. national income over the past three or four decades. From there he leaps to the conclusion that the vast disparity in income between the top 1 percent and the bottom 90 percent will lead over time to the emergence of a new “patrimonial capitalism.” With nothing (save perhaps violent revolution) to worry about, the heirs to big fortunes will turn into a new class of rentiers, living off the rent they receive from owning land and other forms of capital.

In his analysis, it is set in stone that return on capital (r) outstrips economic growth (g), which means that the heirs to great fortunes stay on the fast track to even greater wealth – without even having to work – while the lower and middle class are condemned to economic stagnation or utter hopelessness. His little formula, r>g, is supposed to be one of the great takeaways from the book, but it points up one of the problems of presenting a far-too-static picture of how people behave in a competitive marketplace.

That would not have escaped Mises’ attention. Mises would have challenged Piketty’s assumption that the heirs to great fortunes would manage their money wisely, or that they would have the same success as others (more driven than they) in searching out the best investments. Mises maintained that “the dull and stolid progeny” of people who built business empires were likely to “fritter away” their heritage and “sink back into insignificance.”

Under a capitalist system worthy of the name (meaning, to Mises, a competitive market economy free of the crippling effects of state planning and controls); it is neither the powerful industrialist nor the rich investor who calls the shots; it is ordinary people in their capacity as consumers. Through their “buying or not buying,” consumers provide “a daily referendum on what is to be produced and who is to produce it.” They have the whip hand – the power to “make poor suppliers rich and rich suppliers poor.”

One may almost pity the poor capitalist portrayed by Mises. However hard he might work or fast he might run, someone is probably gaining on him. At all times, other suppliers are striving to unseat the incumbents by discovering new and better ways of serving their customers. In comes a Wal-Mart or Target and out goes a Sears or K-Mart. It is a battle fought with an unending supply of fresh recruits, and it is never the case (as Piketty claims) that “The past (i.e. wealth accumulated from previous success) devours the future.” Rather, it is the future (whatever the next big thing may be) that replaces the present with something better.

In The Anti-Capitalistic Mentality, Mises states unequivocally: “Nobody is needy in the market economy because of the fact that some people are rich. The riches of the rich are not the cause of the poverty of anybody.”

Look at the fastest-growing countries in today’s world. Is there not a natural compatibility – as opposed to an inherent contradiction – between major advances in the standard of living in some countries and the ability of their most enterprising citizens to make spectacular gains? That is what has happened in China as a result of economic liberalization: the number of Chinese billionaires has skyrocketed (and is now close to the number of U.S. billionaires), while hundreds of millions of people inside China have worked their way out of poverty.

Is it true – as Piketty contends – that we are witnessing a hyperconcentration of wealth inside the United States?

It might be true if the people with the highest incomes remained the same from one year to the next – over an extended period of time. But they are not the same people. Just as Mises would have expected, it is an ever-changing cast of characters. A recent report from the Tax Foundation data shows IRS data on people reporting a million dollars or more in income over a nine-year period. Fully half of these people made a one-time-only appearance. Only 15 percent of them reported at least a million in income two of the nine years and only 5.6 percent made it all nine years. 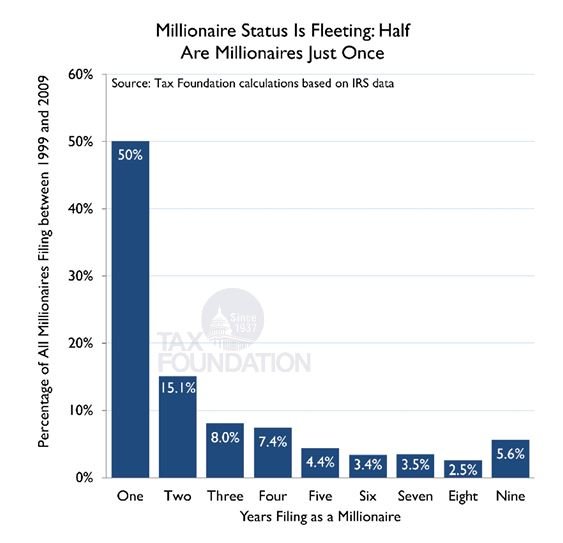 There is no danger of an oligarchy of the rich taking shape here to rival the power and permanence of the landed aristocracies in the pre-capitalistic France and Britain.[1]

But there is something else to worry about – something that caused Mises to lose sleep. That is the thought that the natural tendency under capitalism “towards a continuous improvement in the average standard of living” will be stymied by a growing “absence of capitalism” due to “the effects of policies sabotaging the operation of capitalism.” Among those perverse policies, Mises pointed to credit expansion, gunning the money supply, and raising minimum wage rates. Still more, he railed against progressive policies that diminish individual choice and leave more and more economic decision-making in the hands the state. Mises’ greatest fear was that people would “renounce freedom and voluntarily surrender to the suzerainty of omnipotent government.”

Ironically, the most ardent proponents of big government are those who carry on the most about inequality. Do they want nothing more (to paraphrase Churchill) than an equal sharing of misery?

[1] This assumes that governments do not intervene, as they have been doing, to favor certain groups and enterprises. For more on how government increases income inequality, see Frank Hollenbeck’s article on income inequality, and Andreas Marquart’s work on this topic.

The views expressed on AustrianCenter.com are not necessarily those of the Austrian Economics Center.
hayek_admin2019-01-14T06:15:58+01:00