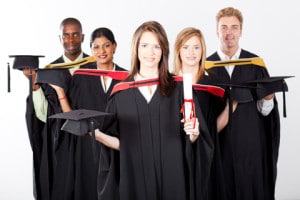 Thousands of graduation speeches have been held or will be held during ceremonies at the nation’s 7000 colleges and universities this spring. Some have been inspiring, while most are repetitions of trite sentiments and a few simply sleep-inducing.

Among those thousands, three stand out (though I am sure there are dozens of others that were equally memorable): the first, the President’s at West Point. With his foreign policy approval ratings at 41%, Mr. Obama needed to change perceptions, and define a legacy that has been mired in scandal and ineffectiveness. The second was Michael Bloomberg’s address at Harvard, which addressed a growing problem of the illiberal left – tolerance of intolerance. The third was the speech delivered by Admiral William McRaven in Austin at the University of Texas, an inspiring talk based on his own experiences at basic SEAL training.

Mr. Obama’s address at West Point “was,” according to The New York Times, “largely uninspiring” and “lacked strategic sweep.” The response from the cadets was muted. What the President did was to set up straw men and then knock them down. The problem is that no one, Republican or Democrat, had advocated the policies he suggested they had. Reading the speech, it seemed that the spectre of George Bush hovered over the podium. (Democracies are our closest friends and are far less likely to go to war.”) Again, sounding like Mr. Bush, he said: “I believe that a world of greater freedom and tolerance is not only a moral imperative; it also helps keep us safe.” But, less anyone mistake him for his predecessor, he set up straw men, adding that while we have an interest in pursuing peace and freedom beyond our borders, “not…every problem has a military solution.” He said we must restrain from “our willingness to rush into military adventures” and later added, for the benefit of Mr. Obama’s phantasmal straw men, that “a strategy that involves invading every country that harbors terrorist networks is naïve and unsustainable.” Of course, no one, not even the despised Mr. Bush, recommended such strategies.

The speech was defensive; it explained why standing on the sidelines would characterize his Administration: crises that “stir our conscience” or “push the world in a more dangerous direction but do not directly (my emphasis) threaten us, then the threshold for military action must be higher.” “..We should not go it alone.” Mr. Obama did assert that the most direct threat to America, at home and abroad, remains terrorism. Yet his only policy initiative was to call on Congress to support a new counterterrorism partnership fund “of up to $5 billion.” That represents .08% of current year’s defense budget. With it, the President expects to “train, build capacity and facilitate partner countries on the front lines,” countries that harbor those who pose America’s greatest threat – yet it will be done with less than one percent of the defense budget!

What was most disturbing about the President’s speech was his inability to articulate the American Presidency as a continuum. While no one in government has anywhere near the power of the President, the Country is far more than one man or one woman. The President guides the ship, at times veering right and at other times leaning left. What is important is that whoever the President is, he (or she) must ensure that the basic tenets of freedom are left intact.

Perhaps the most important message was that delivered by Michael Bloomberg at Harvard. It was a civil call to allow dissidents to be heard, a time to remember that minority rights are protected by the Constitution. Infringing on those rights is a crime against the state. More and more so-called liberals have abandoned a commitment to free speech. We saw that when the President publically rebuked the Supreme Court during his 2010 State of the Union speech for their decision in Citizens United v. FEC. We see it in Senator Harry Reid’s attempts to silence the Koch brothers, and recently in Senator Tom Udall’s proposed amendment to give Congress plenary power to regulate free speech – a proposal that, incredibly, has been endorsed by 41 Democratic Senators.

Most visibly this threat to free speech has gained support in universities and colleges, supposedly bastions of old fashion liberalism. It is within those ivied halls where minority rights have become most endangered. “Intolerance of ideas – whether liberal or conservative – is antithetical to individual rights and free societies, and it is no less antithetical to great universities and first-rate scholarship.” He equated the censorship of ideas that do not conform to conventional thinking as a “modern form of McCarthyism.” And that it is, but in this case it is more insidious and thus more damaging. It operates with the full support of America’s greatest universities, as well as with most of the governing classes in Washington.

“Isn’t the purpose of a university,” asked the former Mayor, “to stir discussion, not silence it?” “Why did administrators not step in to prevent the mob from silencing speech?” One might well have asked the same of Nazis in 1930s Germany, or in China during the Cultural Revolution in the 1960s. Innumerable college administrators bowed to pressure from students and faculty to rescind invitations from those with whom they politically disagreed. Such cowardice was reprehensible. It was, as Mr. Bloomberg said, “an outrage.”
No one party has a monopoly on what is right and fair. Our system of government was established so that it would include the thoughts and ideas of diverse citizens from myriad backgrounds. No place is better suited to be the foundry where such ideas are forged than a university. Toward the end of his speech, Mr. Bloomberg made clear the responsibilities of a university in a free society: “A university’s obligation is not to teach students what to think but to teach students how to think.” Amen! Mr. Bloomberg received a standing ovation for attacking the lion in his den.

The third graduation address was sheer inspiration. It was the kind of red meat that even Vegans need from time to time. Admiral William McRaven, a graduate of the University of Texas and former commander of SEAL Team 3, spoke before his Alma Mater on May 17. His ten pieces of advice, all lessons learned at basic SEAL training in Coronado, California, are embedded in a decades-old culture, familiar to our forefathers and are as relevant today as they were then.

The lessons he spoke about are personal…and ageless: get little things done; learn from failure; work together; don’t back down from challenges, be honorable, and don’t be a quitter.
(In my family, a recent example of persistence occurred this past April when my daughter-in-law Beatriz saw her 250 page manuscript disappear into the nether reaches of the cloud or the mist. All that she had written, perhaps 80,000 words, vanished. It proved to be unrecoverable. Her initial reaction was one of anger and frustration, but she took some deep breaths, sat down and re-wrote the story.)

Admiral McRaven learned his lessons in SEAL training, but these traits can be learned by anyone, anywhere, at any time. They require only focus and self-discipline. They serve to build character, responsibility, self-reliance and success – characteristics critical to a free and financially independent people. They are lessons particularly relevant as our government promotes dependency – a cradle to grave environment so vividly depicted in Obama’s campaign portrayal, “The Life of Julia,” which followed a 3-year old young girl to a woman of 67. Redistribution cannot substitute for aspiration and perspiration. Redistribution penalizes the dependent. Redistribution enhances inequality; it doesn’t reduce it.

In his 2000 book Bowling Alone, Robert Putnam described how we have become increasingly disconnected from family, friends, neighbors, our community and democratic structures. We attend fewer community meetings and belong to fewer local organizations. We may still be bowling, but increasingly we are bowling alone. One of the lessons Admiral McRaven learned was the importance of working together. In his case it was the necessity of six men and a coxswain to paddle as a team to get through an eight-foot surf; for us, it is the importance of partnerships in marriage, business, community service and politics.

There are lessons in all three commencement addresses. Too many politicians hold Party above Country. The President of a republic such as ours has a responsibility, not just to those who elected him, but to the people. He must recognize that he (or she) is but one person in a long line. To treat predecessors as evil is to demean the office he holds temporarily. A focus on inequality, magnifies the distinctions between rich and poor, but fails to consider how products that made a few people rich have improved the lifestyles of millions of others. Politicians compartmentalize the electorate for their convenience, while ignoring the fact that doing so serves to divide, not unite. To be politically correct is to ignore problems, not confront them. It leads to the arrogance that has come to define our universities – an unwillingness to hear contrary views.

Admiral McRaven’s first lesson: make your bed every morning. Little things matter. If you start the day with an accomplished task, you are more likely to see other deeds w