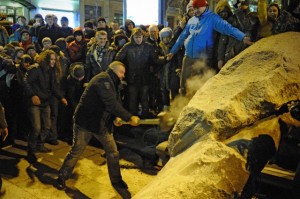 08 Dec 2013, Kiev, Ukraine — Kiev, Ukraine. 8th December 2013 — A man hammers the toppled statue of Vladimir Lenin during the protests in Kiev. — Protesters toppled a statue of Soviet state founder Vladimir Lenin in the Ukrainian capital and attacked it with hammers in the latest mass protests against President Viktor Yanukovich. — Image by © Jaap Arriens/Demotix/Corbis

by Zilvinas Silenas, President of the Lithuanian Free Market Institute, member of the AtlasOne network.

Events in Ukraine remind us of what the West takes for granted and the East has worked so hard to achieve. Personal liberty, the rule of law, and a society organized according to voluntary cooperation are not boring givens of everyday life, but ideals for which people are willing to take to the streets.

The myriad of commentaries on what caused the recent events range from deep historical investigations, to discussions of the post-Cold War East-West rivalry, to analyses of competing business interests. All have most likely played a part. But in concentrating on key events and personalities, the analyses ignore the fundamental force in Ukraine – her people.

People seem tired of being stuck in transition for two decades. The smashing of the Lenin statue in Ukraine, even if it were just a symbolic and isolated event, is powerful. It reminds the world that even though Lenins were toppled, broken, melted, sold for scrap, relegated to the trash bins of history, in certain places all over the Eastern Europe they remained. Unsurprisingly, it is the countries with the most Lenins still standing that have been held back the most. Take whichever indicator you like: economic freedom, ease of doing business, transparency, or corruption. There is a clear connection between the speed with which the ties with the communist past are broken and the current level of development of all kinds, from economic to social to broadband penetration.

Ukrainians feel cheated of the realization of their dreams and aspirations. Clearly, parts of the population identify with Europe more than they do with their eastern neighbors. These lines of division might be geographical (eastern versus western parts of the country) or demographic. Whether their dreams would have been fulfilled by the Association Agreement with the EU is an interesting question, but the decision by authorities to reject a move towards Europe has galvanized Ukrainians and provided a cause far more tangible than freer trade with EU.

Could the things have gone differently? Imagine the popular mood if the issue were EU membership or visa-less travel. Would the government have rejected those proposals in a similar manner? The EU has to answer sincerely whether it wishes to bring Ukraine closer and whether full membership will ever be seriously considered. I bet some EU officials think that it can entice Ukraine into positive changes, pulling it further away from Russia, while avoiding the membership issue. What the EU calls its “soft power” is its ability to force changes in other countries with promises of EU membership at some undetermined time. It is tantamount to holding the carrot in front of the horse — and it has its limits. After a while the carrot becomes an annoyance; this one has been exploited quite well by the opponents of integration with Europe.

Destruction of the remnants of communism and central planning is long overdue. Observe the expression on the faces of eastern Europeans when they see western Europeans waving red flags and singing the Internationale. The toppling of Lenin is the best indicator of what people who have actually lived under socialism think about it. For eastern Europeans, statues of the leaders of communism are much more than testimonies to the mere theoretical debates enjoyed by western intellectuals even today about the possible merits of state ownership of the means of production. The statues of Lenin, present or removed, are eerie reminders of entire generations that were bulldozed to make way for the madness of communism. Ukrainians today are more serious about liberal democracy than many Europeans have been for a long time. The traditional values of Europe self-reliance and self-determination –are much stronger today in Kiev’s Maidan Nezalezhnosti (Independence Square) than in parts of, say, Greece.

Finally, a small detail: The smashed pieces of statue of Lenin were sold. Nothing better embodies the spirit and ambition of eastern Europeans than such spontaneous entrepreneurship. If Europe is serious about the future of Europe, its priorities should be the toppling of all the leftover Lenins and the bringing of the remainder of Eastern Europe into Europe.

The views expressed on AustrianCenter.com are not necessarily those of the Austrian Economics Center.
hayek_admin2014-01-27T09:08:59+01:00