Tracing the U.S. heroin surge back south of the border as Mexican cannabis output falls 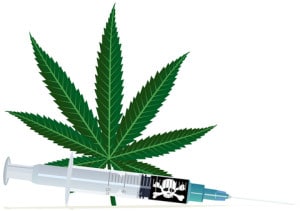 TEPACA DE BADIRAGUATO, MEXICO — The surge of cheap heroin spreading in $4 hits across rural America can be traced back to the remote valleys of the northern Sierra Madre.

With the wholesale price of marijuana falling — driven in part by decriminalization in sections of the United States — Mexican drug farmers are turning away from cannabis and filling their fields with opium poppies.

Mexican heroin is flooding north as U.S. authorities trying to contain an epidemic of prescription painkiller abuse have tightened controls on synthetic opiates such as hydrocodone and OxyContin. As the pills become more costly and difficult to obtain, Mexican trafficking organizations have found new markets for heroin in places such as Winchester, Va., and Brattleboro, Vt., where, until recently, needle use for narcotics was rare or unknown.

Farmers in the storied “Golden Triangle” region of Mexico’s Sinaloa state, which has produced the country’s most notorious gangsters and biggest marijuana harvests, say they are no longer planting the crop. Its wholesale price has collapsed in the past five years, from $100 per kilogram to less than $25.

“It’s not worth it anymore,” said Rodrigo Silla, 50, a lifelong cannabis farmer who said he couldn’t remember the last time his family and others in their tiny hamlet gave up growing mota. “I wish the Americans would stop with this legalization.”

Growers from this area and as far afield as Central America are sowing their plots with opium poppies, and large-scale operations are turning up in places where authorities have never seen them.

In late January, police in Honduras made their first discovery of a poppy farm in the country, raiding a sophisticated mountain greenhouse as big as a soccer field. That same week, soldiers and police in western Guatemala came under attack by farmers armed with clubs and gas bombs when the security personnel moved in to destroy 160 acres of poppy.

The needle habit in the United States has made a strong comeback as heroin rushes into the country. Use of the drug in the United States increased 79 percent between 2007 and 2012, according to federal data, triggering a wave of overdose deaths and an “urgent and growing public health crisis,” Attorney General Eric H. Holder Jr. warned last month.

Although prescription painkillers remain more widely abused and account for far more fatal overdoses, heroin has been “moving all over the country and popping up in areas you didn’t see before,” said Carl Pike, a senior official in the Special Operations Division of the Drug Enforcement Administration.

With its low price and easy portability, heroin has reached beyond New York, Chicago and other places where it has long been available. Rural areas of New England, Appalachia and the Midwest are being hit especially hard, with cities such as Portland, Maine; St. Louis; and Oklahoma City struggling to cope with a new generation of addicts.

Pike and other DEA officials say the spread is the result of a shrewd marketing strategy developed by Mexican traffickers. They have targeted areas with the worst prescription pill abuse, sending heroin pushers to “set up right outside the methadone clinics,” one DEA agent said.

Some new heroin users begin by snorting the drug. But like addicts of synthetic painkillers who go from swallowing the pills to crushing and snorting them, they eventually turn to intravenous injection of heroin for a more powerful high. By then, experts say, they have crossed a psychological threshold — overcoming the stigma of needle use. At the same time, they face diminishing satisfaction from prescription pills that can cost $80 each on the street and whose effects wear off after four to six hours.

Those addicts are especially susceptible to high-grade heroin offered for as little as $4 a dose but with a narcotic payload that can top anything from a pharmacy.

A region’s way of life

While Colombia has historically been the biggest source of heroin sold in the United States, Mexican output has since surpassed it, DEA officials say. Together, the two countries account for more than 90 percent of the U.S. heroin supply, and nearly all of it is smuggled into this country by Mexican traffickers.

As seizures of cocaine and marijuana along the border have fallen over the past several years, flows of methamphetamine and heroin have soared, federal statistics show.

Mexico’s Sinaloa drug cartel continues to be the biggest provider of heroin to the United States, controlling as much as half of the North American market. Sinaloa boss Joaquín “El Chapo” (Shorty) Guzmán grew up here in the mountains outside the municipal seat of Badiraguato, and his organization remains the dominant criminal power along the western border and west coast of Mexico.

Guzmán was captured by Mexican authorities in February, but the drug trade in the western Sierra Madre carries on without a hitch. Young men with AK-47s, 9mm pistols and hand-held radios patrol the dirt roads on four-wheelers, crisscrossing the mountains among dusty little villages and ridgeline airstrips.

The entire region is a giant drug farm and has been for decades.

“There’s no other way to make a living here,” said Silla, who has brought up his sons in the business, as his father did before him.

Feeling confident after several years of good harvests, Silla and other families here planted more poppies than ever this year, but their radiant purple, red and white flowers were spotted by aerial surveillance last month. Mexican soldiers in pickups came roaring up the creek bed soon after and tore out the crop, chopping up irrigation hoses and searching homes for guns and cash.

The Mexican military says that it destroyed 36,000 acres of opium poppies last year, down from more than 40,000 in 2011. Mexican officials have not explained the decline, but analysts say soldiers are too busy battling cartels and patrolling cities, with less money and manpower available for crop eradication.

A kilo of the raw, sticky opium sap that is used to make heroin sells wholesale for $1,500 in the northern Sierra Madre, nearly double its 2012 price, according to growers. With fertilizer and favorable weather, a well-tended poppy field can yield eight kilos of sap per acre, nearly enough to make a kilo of raw heroin.

Opium poppies are also planted farther south in Mexican states such as Michoacan, Guerrero and Oaxaca, where yields are significantly lower.

As the poppies flower, their bright green seedpods grow fat with milky sap, and razor-wielding “rayadores” arrive to meticulously score the pods and bleed them of the sap. The process takes several weeks, as each pod can be sliced as many as six to eight times before it dries.

“If you cut too deep, you ruin it,” said Ruperto Mercado, 40, who said he learned to score Sierra Madre poppies soon after learning to walk and has been doing the work seasonally ever since. At $30 or $40 a day, it is the best-paid farm labor in northern Mexico.

After the sap turns brown and hardens on the pod, it is collected and rolled into balls or cakes. Under proper conditions, it can be stored for years, allowing growers to wait out price fluctuations.

Whatever “goma” (gum) the farmers harvest is sold to middlemen or cartel lab operators, who slow-cook it in acetic anhydride, a widely available chemical that smells like vinegar. After additional processing with other agents, it is dried into powder or stirred into a tar-like paste, then readied for transport.

Unlike marijuana, which cartel peons usually carry across the border in backpacks, heroin (like cocaine) is typically smuggled inside fake vehicle panels or concealed in shipments of legitimate commercial goods and is more difficult to detect. By the time it reaches northern U.S. cities, a kilo may be worth $60,000 to $80,000, prior to being diluted or “cut” with fillers such as lactose and powdered milk.