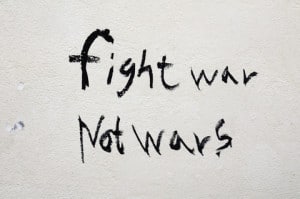 Robert Samuelson is usually a judicious writer. But his column “Global prosperity is no panacea: the post-euphoric world” in the Washington Post, August 17, was a disappointment.

Samuelson rejects trade as a panacea for war. Ok. Nothing is a panacea. No medicine cures all ills all the time. It would not follow therefore that no medicine should ever be prescribed for any ill. Certainly no policy improvement would pass that test. Ever. The question is not whether any amount of trade makes conflict impossible, but whether more and freer trade makes conflict less likely. The evidence is that it does. Trade makes war less likely, but it does not make it impossible. Protectionism, in contrast, is not a step toward peace and generally makes armed conflict more, not less, likely.

PLL-complete-version (1)The evidence is not merely theoretical, but strongly empirical. The issue is one of probability; to say that something is more or less likely is not to say that it is impossible or necessary. Scholars have discovered, after examination of the data on conflict, that, as Professors Solomon W. Polachek and Carlos Seiglie concluded, “trading nations cooperate more and fight less.” They even found that “a doubling of trade leads to a twenty percent diminution of belligerence.” That’s not asserting a universal law according to which any amount of trade makes war impossible, but a statistical finding based on historical data. Erik Gartzke of the University of California at San Diego has shown the connection between trade and peace in his research. Trade transforms state interests: “It is simply not worth the effort to steal much of what could be plundered today, even as much of what is worth stealing cannot be plundered.” It doesn’t mean that there will be no plundering, but that the incentives to plunder are diminished. And that’s a good thing. (Gartzke contributed a chapter on “The Free Trade Peace” to Peace, Love, & Liberty, a book that I’ve edited due out Sept. 1, 2014.)

Samuelson accuses unnamed proponents of “the McDonald’s theory of international relations” of being “sloppy.” I followed the links in the online essay and was led to a Thomas Friedman column – enough said – and an essay by an undergraduate student who cited, and criticized, the same Thomas Friedman essay. Samuelson mischaracterizes Friedman’s claim as “two countries with McDonald’s would never fight.” Friedman, who admittedly does not always set the highest standard for careful analysis, fell short of the absurd claim that “two countries with McDonald’s would never fight.” Even Friedman made it a probabilistic claim, not an apodictic one. So let’s consider the trade/peace thesis, as any rational person would take it, as a claim of probability. Samuelson avers that finding a single example of conflict between countries across whose borders goods flow suffices to falsify the peace/trade thesis. Really? Who’s being “sloppy”? The people who never made the claim attributed to them, or the one who refutes a more reasonable probabilistic claim with a single counter example?

Finally, Samuelson provides another example of sloppy thinking, the claim that “we’re being pulled further apart by deep and durable ethnic, religious, historical and nationalistic claims,” after which he notes as examples “terrorism, cyber warfare, mass migrations and Ebola.” (Ebola?) The term “further” is a comparative. Further than when? Further than one year ago, or ten years ago, or twenty or thirty years ago? There is at present a low-level war going on in Ukraine (with about 2,100 deaths so far) and there is a far more brutal civil war raging in Iraq and Syria (the latter certainly a legacy of the invasion of Iraq by the U.S. government, an invasion that Samuelson peddled in 2002 as “a war we can afford.”) A long-term decline is consistent with short-term upticks. Any time a writer states that something is “bigger,” “deeper,” or “further,” one should ask, “compared to what?” Compared to the Cold War? Compared to the Iraq-Iran war that killed hundreds and hundreds of thousands on both sides? Compared to the massacre in Rwanda (500,000 to 1,000,000 killed) or the Guatemalan Civil War (140,000 to 200,000 killed)?

Careful writers should, usually, avoid terms such as “never” and “always.” Especially when the thesis is one of probability. They should refrain from triumphantly claiming to have refuted a thesis of probability on the basis of one or two instances. And they should tell us what the baseline is when asserting, “we’re being pulled further apart.”

Samuelson is normally a careful writer. I hope he returns to his usual style of logical analysis and careful weighing of evidence. Free trade makes war less likely, not impossible. And when it comes to war, less likely is still very good.

The views expressed on AustrianCenter.com are not necessarily those of the Austrian Economics Center.
hayek_admin2019-01-14T06:14:47+01:00